Animated Disney remake of the Dickens classic: Ebenezer Scrooge (with the voice of Jim Carrey) is shown various stages of his life by ghosts that bring the miser's life and indifference to those who are less fortunate into perspective. Filmed in 3-D, it contains many scenes that show objects, people, etc. coming out of the screen and seemingly toward the audience; also many scenes create the feeling of a roller coaster ride as the audience seems to fly over landscapes and between buildings. Also with the voices of Gary Oldman, Steve Valentine, Daryl Sabara, Colin Firth, Cary Elwes, Robin Wright Penn, Bob Hoskins, Sage Ryan and Ryan Ochoa. Directed by Robert Zemeckis. [1:36]

SEX/NUDITY 1 - Several times, wives kiss their husbands on the cheek.
► In one scene, a female spirit wearing a long dress that is low-cut (cleavage revealed) dances and rubs her body against the back of an elderly man. In two party scenes, women wear floor length, low-cut gowns that reveal cleavage.
► In two flashback scenes, we see a man dance with a woman at a party and he proposes marriage.
► A man and a woman argue about whether love is greater than money.

VIOLENCE/GORE 3 - Throughout the film, ghosts appear: One ghost is in multiple chains and is partially transparent, one is a flaming floating head that hisses and sparks and moves at great speeds creating shafts of light, one is a giant king sitting atop a huge Christmas tree, and one is a tall black-robed faceless entity with black skeletal arms and fingers; a man appears frightened, grimacing, shaking, trembling, stuttering, yelling, crying and displaying shock.
► A ghost gives off gray vapors and floats around a room, breaks his jaw open accidentally, a long tongue hangs out and he works and adjusts his jaw with his hands. An elderly man tries to enter his house and the doorknocker becomes a ghostly head: it roars, and the man is knocked backward down a flight of steps, unhurt.
► The giant skeleton forefinger of a spirit points out into the audience's faces three times. A spirit shows empty black eye sockets with a rim of white light around them and the old man screams and pleads. A bony hand reaches out from under a giant king's robes, which he opens to reveal two other spirits, "Ignorance" (a hissing male child) and "Want" (a starving female child); he says that they are the children of mankind and they soon disappear in dust.
► A man looks out and sees scores of ghosts wandering through the air, one bangs his head on a trunk chained to him, and another roars, flies into a window and knocks the man back.
► A man conducting a shell game slaps the face of a boy that gets too close.
► A ghost turns gray, shouts, laughs, falls down, and disintegrates, his flesh turns to dust and the skeleton does the same.
► An elderly man sits in a dark room, four small bells begin to ring, become extremely loud, heavy footsteps approach from outside, 7 ghostly translucent trunks on chains fly through the door and land with a loud thud, and they are followed by a chained ghost that roars and wails several times during a conversation with the man.
► A beam of light pierces the dark bedroom of an elderly man, changes into a ball of flame with a face that floats above a nightshirt that has hands at the end of its sleeves, it carries a giant candle snuffer, and the man attempts to snuff the creature but it shoots up like a rocket; flames appear under and around the closed door of the room.
► A huge carriage pulled by two giant horses with red eyes chases an elderly man as he grows smaller and smaller; he enters a drain pipe and comes out tiny on the other side.
► The face of a ghostly head with hair aflame changes to those of many townspeople and the scene ends; in another scene, the face of a king changes to that of an elderly man and back to his own.
► In a dream, a man and a woman sort through a bag of clothes the woman stole, describing them as coming off a corpse; a huge rat screams and the man tries to hit it with a cane, striking an old man that has become tiny, and the tiny old man flies out the door, down steps, over rooftops, down hills, and then out of bed.
► In dream sequences, a long table is moved straight through the middle of an elderly man, but does no harm; in another dream, a man walks through the elderly man and in a third, a sad man walks up to him and looks deep into his eyes, although the second man cannot see the first. A man briefly slashes at an old man with a knife, but does no harm.
► An elderly man falls out of bed and onto the floor three times after waking with a start and the last time, he hangs head down for a minute, because his leg is tangled in bed curtains, but he eventually falls on his face, unhurt.
► At a dark, dusty undertaker's shop, an elderly man identifies the corpse of another man in a coffin and says that he is indeed dead (we see the dead man who is pale, with pennies covering his eyes and when leaving the shop, the elderly man steals the pennies). In a brief scene, a corpse is covered completely with a sheet. A black spirit extends a black skeleton's hand, begins to uncover a body and we see part of the forehead.
► A man lifts wriggling eels to sell at a market stall as a nearby fire-eater swallows a flame from a torch. Translucent ghouls in normal street-clothes in the street throw food at an elderly man and laugh. An elderly man throughout the film has dirty, stringy gray hair. A man and a woman have boils on their faces and are covered in caked dirt.
► Someone predicts the imminent death of a young crippled boy. In a brief dream scene, a family sits around a fireplace that is nearly burned out, crying over the death of their youngest son. Words in a close-up shot of a book state, "Marley was dead." An elderly man argues with and insults everyone he meets and he states loudly that people are lazy and always whining and that the poor should die and decrease the useless surplus population. A woman runs out from behind a curtain and yells, "Boo" to scare her father; he does not seem frightened and turns to hug her briefly.
► Boys and a man slide down an icy street for fun; the man falls but is unhurt. A woman hits an elderly man on the shoulder with a feather duster.
► Many scenes take place in dark houses and nighttime streets with a large number of shadows.

SUBSTANCE USE - Wine in glasses are shown on a dinner table in a couple of party scenes (no one drinks), a dozen people hold sherry glasses and lift them in a toast (the scene ends before anyone drinks), we see a bowl of punch at a dance (no one drinks any and we cannot tell if it is alcoholic).

MESSAGE - Both nightmares and dreams can come true. 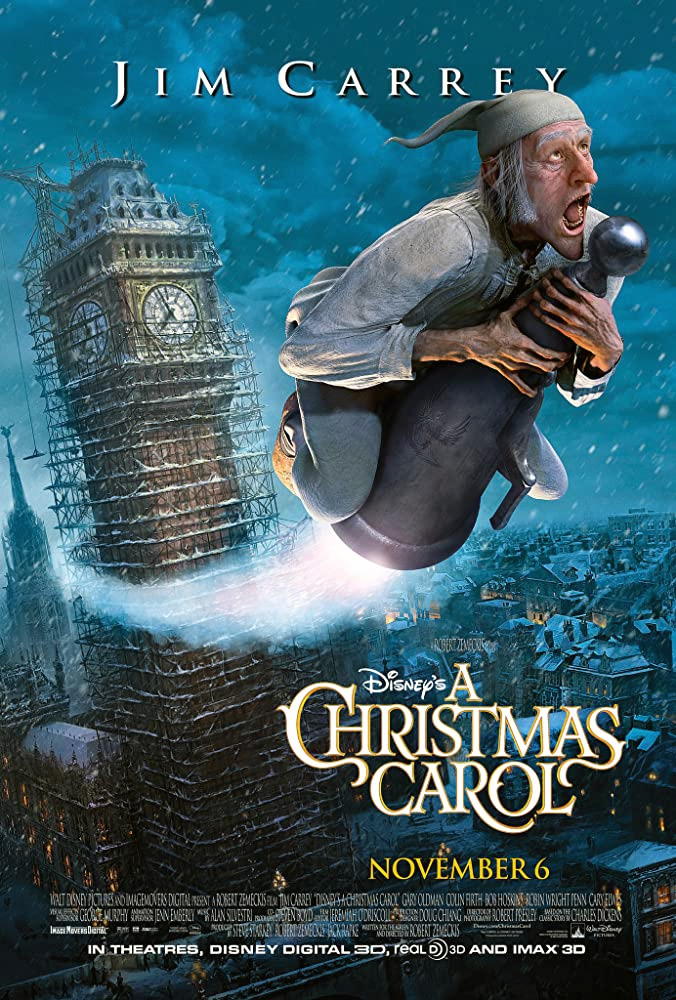