A young man (Zac Efron) is overcome with grief after the death of his younger brother (Charlie Tahan) from a drunk driving accident. He puts his life on hold and he believes he plays catch with his deceased brother every night, keeping a promise they had made when he was alive. When a friend from high school (Amanda Crew) is caught in a bad storm, he must come to terms with his loss in order to allow for a new beginning. Also with Donal Logue, Kim Basinger and Ray Liotta. Directed by Burr Steers. [1:49]

VIOLENCE/GORE 5 - An SUV is seen crashing into the back of a car with a teenage boy driving and a boy passenger: the car is turned and a semi-truck is seen coming toward it, and flashes of a car being struck on its side and flipping over are seen (this is seen in a flashback once more); the teenage boy is seen with cuts on his face, hands and arms, and a large bloody wound is seen on his forehead as he holds the bloody boy, who has cuts on his face, arms and chest.
► A young man swims through an underwater boat's wreckage, he is caught up on a line and fights to free himself just before he runs out of air; he pulls himself out of the water and is slammed against a rocky shore (we hear the crack of his head hitting the ground), he struggles to get his footing, he finds an unconscious young woman (both the young man and the young woman have bloody cuts on their foreheads), and they are rescued (we see the young man in a hospital with butterfly bandages on his forehead, as a man explains that the young woman is also in the hospital for hypothermia, and they are both seen fully recovered later).
► A man uses defibrillator paddles on a teenager and a large wound on his forehead is bleeding; the teenage boy awakens with the jolt of electricity and begins to scream as he sees a dead boy, his arm limp and head turned (the teenage boy is later seen with bandages on his face, healed cuts on his hand, and burn scars from the defibrillator).
► A young man shoves another young man against a bar while shouting, a man pulls the young man away, the young man pauses and then punches the other young man in the mouth, causing him to fall to the ground (the attacker is later seen shaking his hand from pain). A man leaps on a young man, shoving him and shouting, saying that a young woman was dead; the young man pushes back and the man walks away angrily.
► A young man and a man steal a boat, push away from dock and another man runs after them and lands on the deck of the boat with a thud; he is then pinned down to the deck by the other man until he says he will not attack them again.
► A young man finds a young woman lying on a grave, her forehead covered in blood from a cut; the young man says it looks gross and offers to help clean her up, and we see him wipe away the blood.
► A teenage boy driving a car with a boy in the passenger seat jokingly punch each other; the playing escalates and they slap each other, the car swerves, the teen shouts at the boy, they stop, and he then punches the boy one more time in the stomach.
► A sailboat is seen tipping over, and people race to help. Two sailboats race quickly through the water, a boy on one of the sailboats shouts to a teenage boy that he thinks they are going to crush and the teenage boy steers the sailboat through a narrow space between two large boats.
► A group of teenage boys jokingly push and shove a boy, and the boy fights back playfully. A teenage boy holds a boy by his collar as he tries to dive at another teenage boy. A teenage boy lifts a boy on his shoulders and spins him around.
► A young man accidentally runs into a man, the man has an IV coming out of his hand and explains to the young man that he had saved the young man's life (he says, "You were a complete flat line") but that he is dying of cancer.
► Two young men discuss how another young man had died after driving over a landmine; one says that the body "did not look bad." A young man and a man discuss how a body has to be exhumed from a cemetery because they believe the man had been killed by his wife. A woman tells a young man that a man died of cancer. A boy jokes with a young man that he has to be careful of "blood sucking sea monkeys." A young woman asks a young man if a boy had been killed in a drunk driving accident. A man tells a young man that he wants to shoot a flock of geese and is seen pulling arrows out of a tree while holding a crossbow.
► A young man steers a remote control airplane into a group of flying geese, and the geese begin to defecate on the young man and a boy. A man picks at goose feces on a gravestone. A teenage boy spits on his hand and rubs it on the head of a boy.
► A young man and a boy fall to the ground countless times as they slip and slide down a stream during a torrential downpour; they are laughing and appear unharmed. A young man angrily rips pictures off a wall and slams a corkboard on the ground.

SUBSTANCE USE - Men and women are seen drinking alcohol in a bar, with dinner, and toasting a boat, a young man buys a group of young men and a young woman shots of alcohol, a young man is seen drinking by himself, a young man spits out a cup of gin he mistook for water, and a teenage boy tells another teenage boy about a "kegger" party and asks if he is coming.

DISCUSSION TOPICS - Drunk driving, death of a loved one, being able to talk to the dead, grieving, internalizing, sailing, sailing around the world, loss, coming of age.

MESSAGE - Keeping a person's memory alive is an important part of the grieving process. 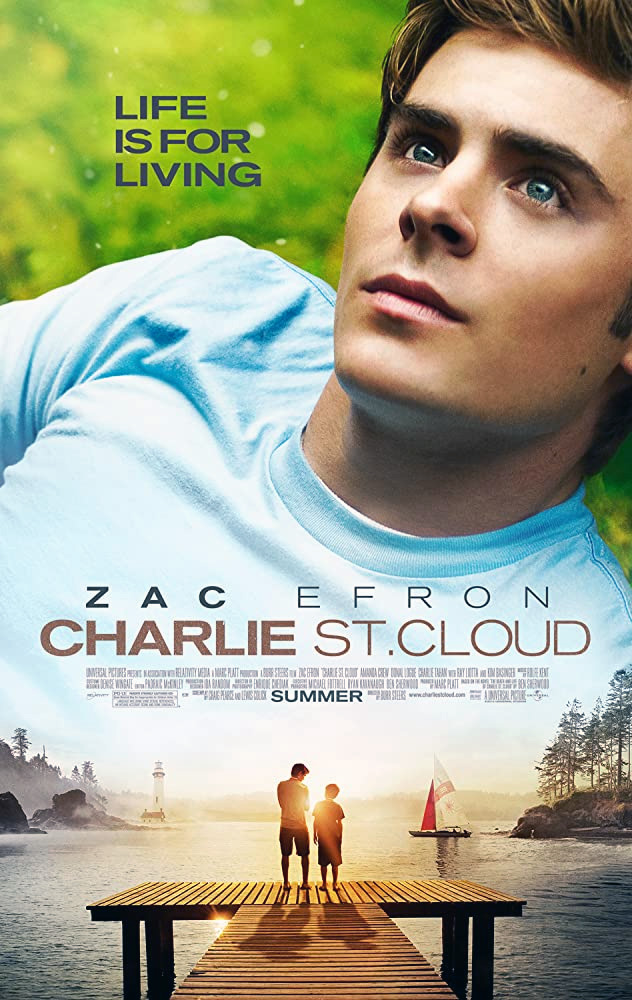