Why is “Butch Cassidy and the Sundance Kid” rated PG? The MPAA rating does not include content details. The Kids-In-Mind.com evaluation includes, a few implied sex scenes, a few kissing scenes and cleavage revealing outfits, many bank robberies at gunpoint with a few scenes showing people being shot and otherwise injured with some bloody wounds shown, and some strong language. Read our parents’ guide below for details on sexual content, violence & strong language.” Revisionist, ironic western about the real-life outlaws of the Hole in the Wall Gang, Butch Cassidy (Paul Newman) and the Sundance Kid (Robert Redford) and their exploits after being pursued by Pinkerton detectives all the way to Bolivia. Also with Katharine Ross, Strother Martin, Henry Jones, Jeff Corey, George Furth and Cloris Leachman. Directed by George Roy Hill. A few lines of dialogue are spoken in Spanish without translation. [Running Time: 1:50]

– A woman undresses down to her undergarment that reveals cleavage; a man in the room holding a gun tells her to continue undressing and we see her wearing a short slip (we see her bare legs to the mid-thighs), she unbuttons the slip and he takes off his gun belt, he touches her and they kiss (sex implied; it is not clear at the beginning of the scene that they’re actually lovers playacting and there’s no coercion). A man and woman get into bed together, she unfastens her outer clothing and removes her stockings (we see her bare legs), and the man unbuttons his shirt (we see his bare chest and abdomen).
► A man and a woman kiss in bed and he kisses her shoulder. A man and a woman hug and kiss in bed. A man and a woman kiss and hug. A woman caresses a man’s face in a saloon. A man says, “I’ll go look for a woman.” A man kisses a woman on the cheek and they hug and kiss on the cheeks. A song’s lyrics include a reference to a woman, “…with her lover.”
► A woman wears a robe that reveals her bare legs and thighs.

– Men on horseback put masks on and charge toward a train stopped on tracks, and the men board and steal bags from inside while some open fire shooting the conductor (there’s no blood) and others inside the train; other men on horses arrive shooting some of the robbers and two get away. A man is shot and falls off his horse (he lays dead on the ground), two men hiding in rocks are shot at from somewhere, and we see blood on a wounded man’s vest. Two men are shot at by officers while eating in a cafe; they run for shelter and shoot back, the two groups shoot back and forth and many officers are shot, a mule is shot, a man is shot in the back and another is shot in the arm (we see some bloody wounds). Several armed men try to steal money from two other men, they argue and the two men threaten the thieves, and then shoot them and they are all struck with blood on their shirts. Two men run out of a building and many other men open fire on them (we hear the gunfire and do not see the result).
► A man holds a gun on a bank manager and forces him to open the safe before locking him inside the safe; two men are chased by police and are not caught. An explosive blows up in a town while two men rob a bank and the police chase them (they are not caught). A man jumps on a speeding train, moves toward the conductor with his gun drawn and the conductor stops the train; dynamite is used to blow a door open and we see a man inside with bloody wounds on his arm, head and face. Police officers chase three people after they try to rob a bank; the three hide in trees and shoot at the police as they approach causing them to turn and ride away.
► A woman yells at men robbing a train, they threaten her and a man is held with his mouth covered (the man has a black eye and cuts on his face) as dynamite blows open a train car door (money floats in the air and men are thrown back with no visible injuries); another train approaches and unloads men on horseback that chase and shoot at the robbers (one is shot in the back and another is struck and falls off his horse while 4 others ride away in separate directions. A man accuses another man of cheating at a poker game, and then stands up and threatens him; the other man shoots the man’s gun belt off, and then shoots the man’s gun across the floor without hitting the man. A man jumps off a roof and is told to stop by other men with guns, another man jumps down and the first man punches a gunman and the two other men ride away on horses. Two men rob a Bolivian bank and hold customers at gunpoint (we see people lined up against a wall); they then argue about robbing a Bolivian bank without knowing how to speak Spanish.
► Two men argue about who is in charge of a gang and they agree to fight as one man draws a large knife; the other man kicks him in the crotch and punches him in the face knocking him unconscious (we see the man hold his hand in pain after punching the other man).
► Two men plan to jump from a ledge into a rapid running river below, one man yells, “I can’t swim,” and the other replies, “The fall will probably kill you”; they then jump, and one man grabs the other man in the water and they argue about one drowning the other. Two men on horseback are followed by several other men on horseback; they climb a sheer wall and tumble down a ridge where they argue about jumping into a river below. Two men break into a sheriff’s office and the sheriff yells at them. A sheriff tries to raise a posse to take down a gang of bank robbers and yells at men that do not volunteer. We hear about a man leaving to go to war against the Spanish.
► We hear a voiceover say, “They are all dead now.” A man talks about “working like a dog.” A comment is made about getting a man an “old dog to kick.” A sheriff tells two men, “You’re gonna die bloody.” A man says, “I’ll die a happy man.” A man complains about a woman joining him and another man and says that it’s ok until she starts to whine or make a nuisance of herself. A woman says that she will go with two men but that she will “not watch them die.” A man tells a woman, “I’ve never shot anyone.”
► A man is startled by a snake, he shoots it and it falls to the ground dead. A man is shown with his arm in a sling. A man does tricks on a bicycle and crashes through a fence, he falls on the ground inside a bull pen and the bull charges him (he runs away and is not harmed). A man steps in a pile of dung (we do not see it). A man spits in a few scenes (we see brown goop leave his mouth in a couple of scenes).

Butch Cassidy and the Sundance Kid SUBSTANCE USE

– A man drinks a shot of liquor in a saloon, two men and a woman drink wine in a restaurant, and two men drink beers in a hotel. A man smokes a cigar at a poker table, and a man chews tobacco and spits in a few scenes (we see brown goop leave his mouth). 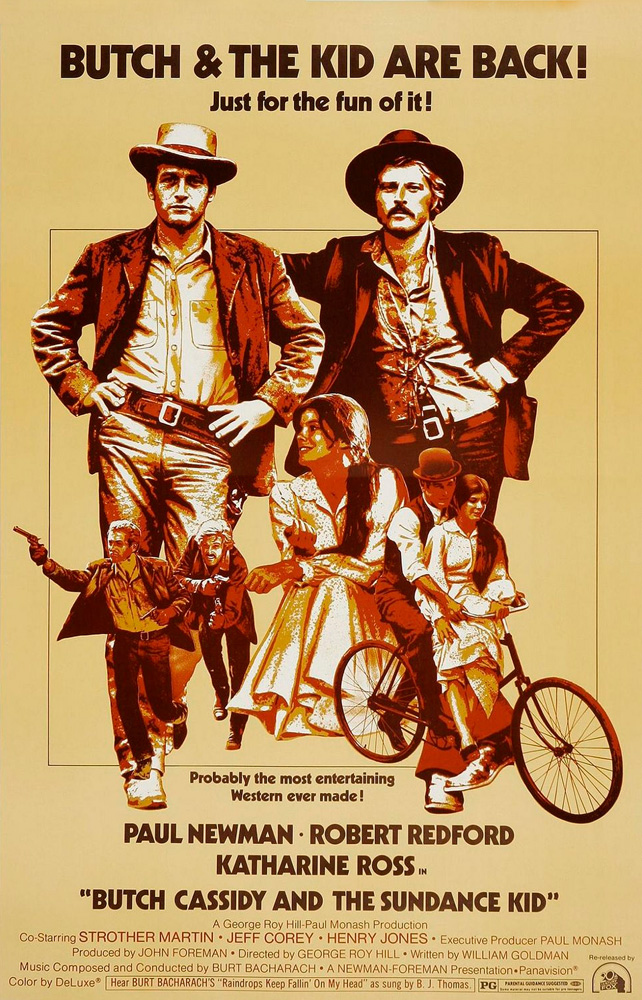