Why is “Boy Erased” rated R? The MPAA rating has been assigned for “sexual content including an assault, some language and brief drug use.” The Kids-In-Mind.com evaluation includes a rape scene, many discussions of sexual orientation and conversion therapy practices, and 3 F-words. Read our parents’ guide below for details on sexual content, violence & strong language.”

– A young man sits on a bed next to another young man lying in the bed; the first young man touches the other’s crotch over a blanket and moves to lie down with him, they hug and the first young man climbs on the back of the other, and holds his hand over the second young man’s mouth as he thrusts on top of him while the second young man screams for him to stop (we see boxer shorts partially lowered when they separate and a brief glimpse of lower back/upper buttocks); afterward the attacker says, “I’m gonna be in so much trouble” and describes other acts he has committed (presumably rapes) with another young man.
► A young man and a young woman kiss in a car and when she touches his thigh near his crotch he flinches, she tells him that if he is not aroused she can make him aroused and they talk about waiting for sex until they are married. A husband and his wife hug and kiss in a couple of scenes. Two young men look at each other across a room, go to the apartment of one of the young men where they lie together in bed and touch each other’s faces tenderly and hold hands (they are fully clothed and it is not clear whether sex occurs). A young man kisses another young man on the clothed shoulder.
► Several young men and young women swim at a lake; the young men are shirtless (we see bare chests, abdomens and backs) and the young women are shown wearing their underwear (cleavage, bare abdomens and legs are seen). A young man takes off his shirt and we see his bare back, chest and abdomen. We see a poster of a shirtless man (his bare chest and upper abdomen are visible). Women wear low-cut tops that reveal cleavage in a few scenes.
► A teen girl talks about looking at other girls in the locker room and the showers at school and describes how she acted on a sexual encounter with another teen girl when they touched and kissed each other. A man talks to several young men about what a real man is and he instructs them on how to stand and how to bat a baseball and uncross their legs when seated. A man speaks to attendees of a conversion therapy session and makes reference to there being a “God shaped hole” in each of them and that the therapy will, “Bring them back to God,” as well as that their homosexual behavior is a choice. A man talks to attendees about LGBTQ terms and mocks them adding unicorn to the list. A man watches a young man in a restroom while he urinates and calls him names. A man talks to his teen son about taking small steps to manhood while staying with his girlfriend while his father is away. Rules of attendance are reviewed including clothing requirements (women should wear skirts of a particular length and bras at all times) as well as no pornography or masturbation and that all trips to the bathroom will be accompanied by a counselor. A doctor tells a young man that his parents have asked that she test his blood for testosterone levels.

- A young man thrusts on top of another young man: the second young man screams for him to stop and afterward the attacker says, "I'm gonna be in so much trouble" and describes other acts he has committed (presumably rapes) with another young man (please see the Sex/Nudity category for more details).
► A young man is ushered through a crowd of people and beaten on the back with bibles by several of them in an attempt to "Beat the demon out of him"; the young man is then placed in a bathtub (while clothed) and prayed over by the same crowd of people. A young man yells at a man and storms out of a room, he is followed and when he retrieves his possessions is wrestled briefly by a man and surrounded by others as they pray over him. A person is struck in the head by a baseball during batting practice and falls to the ground; others take him out of the batting cage (we see no injury). A man grabs his son's arm as they argue, and then lets him go. A teen boy shoves a man away from a young man and tells him to let him go.
► A young man yells and throws a rock at a bus stop advertisement that shows a picture of a shirtless young man and breaks the glass covering it. A man yells at a teen boy. A woman yells at a man through a door and then to his face. A young man confronts another young man about his commitment to want to change himself. We hear that a young man killed himself while undergoing conversion therapy.
► A man yells at another man and takes his child away from a facility where the child was struck in the head by a pitched baseball. A man yells at therapy attendees about not talking about anything that happens in therapy. A man tells a young man to empty his pockets and that his belonging including his phone will be checked for any offending material while in the facility. A man speaks to attendees of a conversion therapy session and makes reference to behavioral sin (alcoholism, homosexuality, drug abuse, gambling, etc.). A man tells a young man that pages were torn out of his journal and that another man will evaluate whether they are appropriate. A teen boy talks to a chair pretending that his father is sitting in it and refers to his father having said that he wished the young man had never been born. A young man puts his hand out a car window as his mother drives and she insist that he put it back inside or he might lose his arm. People are told to prepare a moral inventory of their sins. A woman says, "Shame on you" to a man and then to herself. A young man talks to his father about how he hurt him by not taking interest in what was happening to him.
► A young man urinates in a restroom and we hear the trickle.

- A young man smokes a marijuana cigarette and shares it with another young man who takes a drag. People hold glasses that likely contain wine at an art gallery showing. A man smokes a cigarette outside a building.

- Conversion therapy causes damage to people under the guise of curing something that is not a choice. 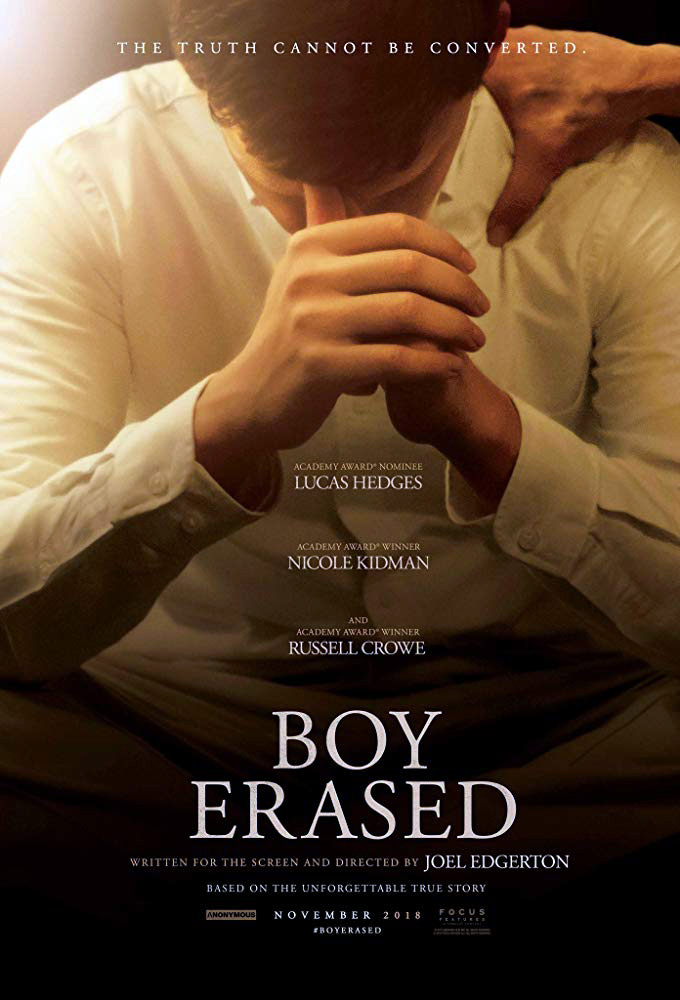