Why is “Birds of Prey” rated R? The MPAA rating has been assigned for “strong violence and language throughout, and some sexual and drug material.” The Kids-In-Mind.com evaluation includes a forced strip scene in a crowded nightclub, several cleavage revealing outfits and a couple of scenes with partially nude women in paintings; several scenes of torture and murder with bloody wounds shown, many fight scenes between many people with guns and lots of punching and kicking and flipping ending in death and bloody wounds, a family is gunned down and we see dead bloody bodies including children, a hyena attack leaving a man missing part of his leg (we see the bloody limb), and a scene of a woman using her powers to dispatch many foes; and nearly 80 F-words and other strong language. Read our parents’ guide below for details on sexual content, violence & strong language.” After The Joker and Harley Quinn (Margot Robbie) break up, she tries to make it on her own and finds herself being menaced by a Gotham crime boss (Ewan McGregor). Hence, she joins with a few new friends and a former detective to try to take him down for good. Also with Mary Elizabeth Winstead, Jurnee Smollett-Bell and Rosie Perez. Directed by Cathy Yan. [Running Time: 1:49]

– A series of paintings hang in a room and we see they are of nude women with string wrapped around their faces and necks (we see bare breasts and abdomens). A man in a nightclub tells a woman to get on a table and dance and to take off her dress and he gives another man a knife and tells him to cut it off her (he does and we see the partially clothed woman wearing a bra and underwear). Several nightclub scenes show many women wearing low-cut tops and dresses that reveal cleavage and some bare abdomens. A woman’s dress reveals her bare shoulder and a slit up the side shows her bare leg to the upper thigh. A painting on the wall of a nightclub shows a woman’s nude back to the waist and the side of one breast. A woman wears a low-cut vest and a bra-like top that reveal cleavage and bare abdomen in several scenes. An eggplant emoji is used in a description of a man. An animated sequence shows a squiggling sperm fertilizing an egg. A man reaches into a woman’s pants pocket and pulls out a tampon.
► A man puckers his lips as if sending a kiss toward a woman. A woman kisses a man on the cheek.
► A woman touches the cage of a hyena and the animal licks her face as it growls at a man suggesting that he’d trade the animal for sex with the woman. A woman talks about falling in love and the heartbreak she suffered when the relationship was broken up. A woman wears a T-shirt with a crude anatomical quip on it while at a police station. A woman remarks about having a picture of a “Nude Eleanor Roosevelt.”

Birds of Prey SUBSTANCE USE

– A woman with a tray walks around a nightclub and another woman takes a pill from the tray and swallows it (we don’t know what it is), men shoot into a large pile of cocaine packets throwing powder into the air and a woman inhales deeply, and a man injects another man in the face with a syringe a few times. A woman drinks a lot of alcohol in a nightclub and spills some on a man as she dances on a table, a woman drinks a shot of liquor in a nightclub, a woman drinks from a bottle after being suspended and appears drunk, several women drink margaritas and a woman asks a teen girl if she drinks, a woman drinks from a flask, and many people are shown drinking in several nightclub scenes. A man smokes on a sidewalk, a man smokes a cigar, and a woman holds a cigarette in her mouth and does not light it.

– It’s hard to get through life without friends. 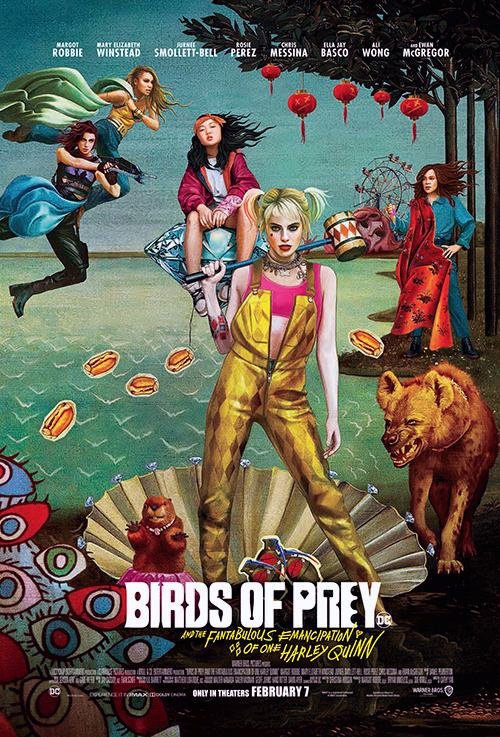