In this comedy/drama, a boy (Jamie Bell) gives up boxing and takes up ballet, much to the dismay of his coal-mining father and brother. Also with Julie Walters, Gary Lewis, Jamie Draven, Jean Heywood, Stuart Wells, Mike Elliot, Billy Fane and Nicola Blackwell. [1:50]

SEX/NUDITY 3 - While on a bed, a boy leans over a girl while she touches his cheek (he gets up before they kiss). A girl tells a boy that her parents sleep in separate beds and don't have sex, and also mentions her father's infidelity. A man tells a group of boys not to engage in any "hanky-panky" with girls who are taking a dance class next to them. A girl offers to show a boy her "fanny." Twice, a boy gives another a peck on the cheek. We see a man's bare buttocks when he "moons" police officers; also, we see several shirtless male dancers, a few shirtless boys throughout the film, a man's bare chest and legs when he's sitting in a bathtub, and a man wearing a tank top and underwear (he's onscreen for a second).

VIOLENCE/GORE 3 - In a few scenes, a crowd of striking workers being held back by a line of police officers yell and throw eggs at a bus of people crossing union lines; in one scene, police officers chase after a crowd (a few people are shoved and one is knocked down); they chase one man in particular for awhile, and after they catch him and knock him to the ground, they hit him with sticks (we see some blood on a sheet wrapped around his body; in a later scene he's fine). A man punches another and knocks him to the ground (the man's lip is slightly bloody), a boy punches another and knocks him off a bench, a woman slaps a boy's face, two men yell and shove each other, a man rattles another's grocery cart and yells at him, a man grasps the back of a boy's neck and leads him out of a room, a man grabs a boy and shoves him against a wall, a boy punches a sign a few times, and a boy kicks a fence a few times. A man smashes a piano into pieces with a hammer. The following are played for laughs (or at least not to be taken too seriously): a man swats a boy's nose with a magazine, a boy hits another boy's head with a pencil twice, a boy shoves another, a boy is punched in the face and knocked to the ground during a boxing match, a boy falls down a few times while trying to perfect his dance turns and positions, a boy pushes a man off a fence they're sitting on, and a boy and a girl have a pillow fight. Some scenes of people yelling at each other. A man spits on a police car; also, a man urinates on a snowman.

DISCUSSION TOPICS - Defying traditional gender roles, learning ballet, union strikes, crossing union lines, loss of a parent, dysfunctional families, father-son relationships, poverty, the assumption that male dancers are homosexuals, cross-dressing (in one scene a boy wears a dress and says that his father wears dresses too), underage drinking (two boys take a swig of liquor, and one spits it out).

MESSAGE - Follow your dreams and be true to yourself; where there's a will, there's a way. 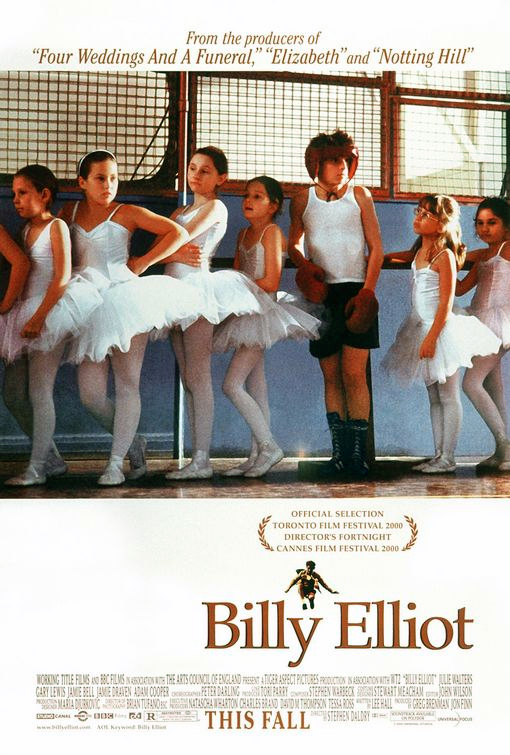