In exchange for selling his soul to the Devil (Elizabeth Hurley), a geeky guy (Brendan Fraser) is granted seven wishes, most of which involve winning over his dream girl (Frances O'Connor). Also with Gabriel Casseus, Orlando Jones and Rudolf Martin. [1:30]

SEX/NUDITY 6 - Many instances of sexual innuendo (including references to multiple-partner sex and prostitution) and a few kisses. A couple of discussions about the size of a man's genitalia, one of which takes place in a men's locker room: a female reporter says many double entendres while often looking at a man's crotch (he's wearing a short towel, with his bare chest and most of his bare legs visible), and when he accidentally opens his towel it's implied that she sees his genitalia (we see nothing but her surprised reaction and his flustered reaction). A clothed man adjusts his genitals conspicuously at the beginning of one scene. While staring passionately into each other's eyes, a man tells a woman about how sensitive our skin is and then lists, among other things, two specific male and female parts of genitalia (in clinical terms) that are also quite sensitive. A man picks up a woman and carries her to the foot of a bed, where they are stopped from doing anything further by a person who's already in the bed. A woman pushes a man into a chair, straddles him and kisses him passionately. A woman standing behind a man caresses his cheek, whispers into his ear and briefly kisses his cheek. A woman grabs a man's clothed buttocks. A shirtless man wakes up in bed next to a woman in a nightgown (nothing sexual is implied). A woman wears a cleavage-revealing top in nearly every scene she's in; in one scene she also wears a very short skirt while teaching a classroom of boys, and in another scene she's wears a dress with a very high slit (at one point we glimpse the front of her panties). We also see a woman wearing a bikini; many women in a dance club wearing cleavage-revealing tops; some bare-chested men and what appears to be a topless woman covering her breasts with her arms while in a hot tub; a woman wearing a towel (she opens it briefly, but we don't see anything); a woman wearing a short, somewhat transparent robe (we see part of her panties); several cheerleaders wearing midriff-revealing tops; a man's bare shoulders as he sits in a hot tub; a billboard of a woman wearing a backless dress that also reveals a partial side of her breast; and a painting of two nude figures (one's bare backside is visible and the other's leg and stomach are visible).

VIOLENCE/GORE 3 - Nearly all played for laughs. In one scene lots of gunfire is exchanged and a large explosion causes three people to fly through the air. A person jumps onto a helicopter and dangles from it while it's flying, then falls off and lands -- in a different scene -- on the hood of car (the person is slightly dazed but otherwise fine). A man in a fiery Hell is roared at by a large devil and is nearly smashed with a large pitchfork (he grabs onto the pitchfork and then falls backwards into a fiery pit, but he's not injured). A woman yells at a man and throws several things at him, a man is hit in the head with a falling object, a man is dragged from a building in handcuffs, a woman shoves a man through a door, a man grabs another's shirt and pushes him, a man swats another with a horse whip, a huge contract drops into man's lap, a man rips off part of his mustache (we see pink flesh on his upper lip, but no blood), a man kicks sand in another's face several times, and a basketball player breaks a backboard (we see the shattered glass falling on him, but he's not cut). A person is threatened with a gun. A person throws a flaming drink into a convertible car and catches it on fire. A person causes traffic lights to fail, resulting in many cars crashing into each other at an intersection. A car is driven recklessly and several people are nearly hit. A man sweats profusely in one scene (water pours down his face, and he spits some onto a person he's talking to). A glimpse what looks like a video of surgery playing on a large screen in a dance club (we see a close-up of a pulsating, somewhat bloody body part).

LANGUAGE 3 - Possibly one anatomical reference (it's barely audible), a scatological reference, many mild obscenities, a religious obscenity, a couple of insults, and a profane finger gesture.

DISCUSSION TOPICS - The Devil, selling one's soul to the Devil, Devil vs. God, selflessness, social ineptness, self-acceptance, being obsessed with someone, homosexual stereotypes, infidelity, drug manufacturing and drug use (in one scene we see a man smoking marijuana, and in the next scene we see a drug factory with large amounts of cocaine inside; we also see a man in the factory who has cocaine around his nostrils and on his upper lip).

MESSAGE - Accept your life as it is rather than wish it away; be careful what you wish for. 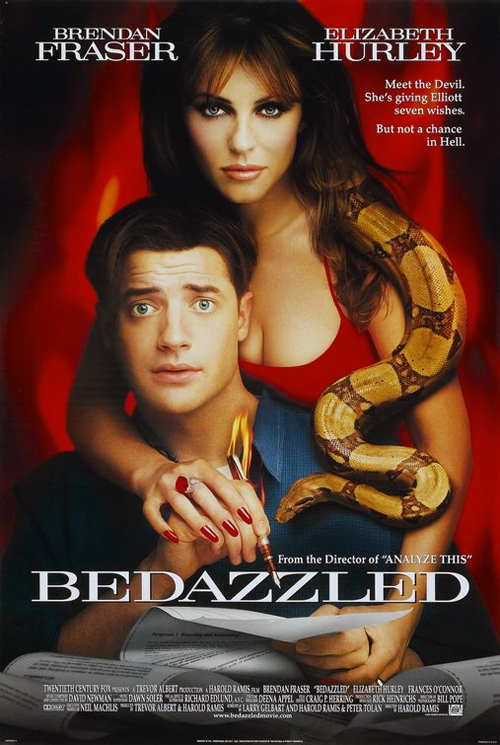