A young girl (AnnaSophia Robb) and her father (Jeff Daniels) move to a small Florida town, where she has trouble fitting in. A chance meeting at a grocery store begins her relationship with an orphaned dog that brings joy and friendship to her and the rest of the town. Based on Kate DiCamillo's best-selling novel. Also with Elle Fanning, Dave Matthews and Cicely Tyson. Directed by Wayne Wang. [1:46]

SEX/NUDITY 1 - A woman says that she thinks two boys tease a girl because they like her. A boy puts out his hand to help a girl up off the ground. A dog chases a man, bites the back of his pants and pulls them off (we see the man with his pants around his ankles and wearing decorative boxer shorts).

VIOLENCE/GORE 3 - Two boys punch and nudge each other in several scenes and in one scene wrestle on the ground after falling from a porch. A dog chases a man, bites the back of his pants and pulls them off. A woman struggles with a dog over a sandwich, and a girl pulls the woman down on the ground, thinking that she is hurting the dog.
► A girl walks into a dark garden to find her dog during a storm. A girl climbs a fence, walks through some heavy brush toward a house where she has been told a "witch" lives. A dog panics and races back and forth through a trailer during a thunder storm (he is not hurt but he does knock some things down). A woman screams and hides behind a table when she sees the silhouette of a dog through a window and thinks he's a bear.
► Animal control people come to retrieve a dog, the dog jumps into the truck and a cage and a girl cries and pleads for the dog to be returned to her; her father holds her as she struggles against him.
► An unaccompanied dog races through the aisles of a grocery store knocking down people, displays of canned goods and people carrying boxes of produce (people and food fall onto the floor). A dog tips over a punch bowl spilling its contents on his head. A bird squawks loudly scaring other animals in a pet store; birds flutter around, a pig scampers across the floor, a dog barks and a man and a girl try to calm them. A dog stands on his hind legs, and leans on a man's shoulders knocking the man to the ground, and the dog licks the man's face (the man is frightened but not injured). A dog chases a mouse through a church causing people to jump up and some to scream, and the dog traps the mouse, picks it up in his mouth, then drops it on the floor (we see the mouse soggy but uninjured). A dog chases a cat.
► A boy talks about a girl's brother having drowned. A woman talks about her great-grandfather having fought in the Civil War, and when he came home all of his family was dead. A man talks about having shot his dog for howling too much. A man talks about having been in jail after hitting a police officer and breaking his nose. Several people eat a candy that makes them feel sad and they talk about their feelings. A woman tells a girl a story about a bear coming into a library, and standing in front of her; the woman threw a book at the bear, and the bear took the book and left the library. Boys talk about a woman being a "witch" and that she'll "eat" a girl's dog. A man who is afraid of dogs says after a dog has licked his face, "He almost ate my face off." A girl yells at her father. A girl talks about her mother having left her when she was young. A man threatens to call the pound to have a dog taken away.
► A garden hose flips back and forth spraying water on a man and while trying to get out of its path he falls on the ground and into a puddle. A goat rams the side of a police car, a goose bites the pant leg of a police officer and flutters around his head when he tries to drive away and he swerves along the road. A dog nudges a man's crotch with his nose, and a dog nudges a man's buttocks with his nose.
► A girl imagines a woman squirming under the lens of a microscope. A police officer talks abusively to a man, accusing him of foul play. A suspicious looking man walks past a man and a girl and we see him being confronted by police.
► A man steps in dog feces. A girl spits out a piece of candy and drools. A dog belches a few times after eating candy. A man pokes an apple with a knife.

SUBSTANCE USE - We hear people talking about alcoholism and its effects on people.

MESSAGE - Letting go of painful memories opens your eyes to new relationships and joy. You can't hang onto something that wants to go, love it while you've got it. 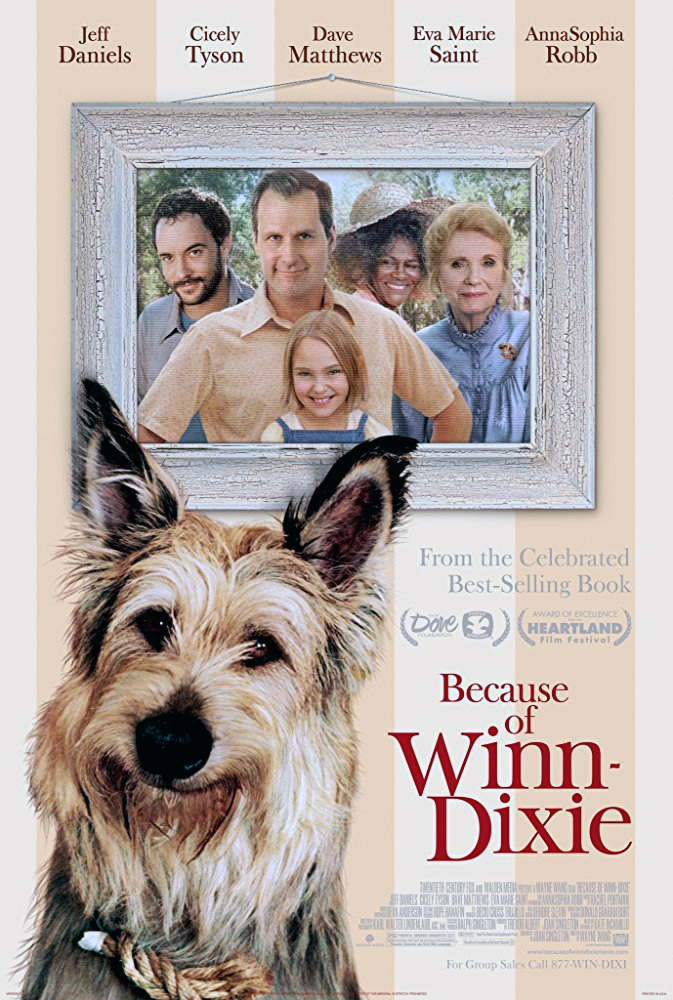