SEX/NUDITY 5 - Bare female breasts are seen throughout the movie in a non-sexual maternal and cultural context; scenes include breast feeding newborns and babies, a woman sharing a bath with a baby, a woman is seen lying in bed next to a swaddled baby, and multiple women are seen in indigenous tribal surroundings, where women do not routinely cover their breasts.
► A woman appears to be completely nude in a hot tub -- she's holding a nude child, covering her breasts, and when she stands up, her nude torso is visible momentarily.
► The bare chests of men are visible as they soak in a hot spring. A man's bare chest is visible as he holds a nude baby in a shower. A shirtless man is seen holding a nude child.
► Children of various ages, from newborns to toddlers, are seen in various states of undress, including unobscured views of both male and female genitals. Infants are seen without clothing, as well as young children wearing only indigenous tribal outfits, which do not cover buttocks and genitals -- in one instance a baby grabs the genitals of another male child, and the male child pushes him away.

VIOLENCE/GORE 2 - A baby is seen immediately after exiting the womb, with the umbilical cord still attached, covered in mucus and a small amount of blood and a woman is seen using a tool to draw mucus from the baby's mouth.
► A woman is seen sorting through a bowl of bloodied animal innards. The sound of breaking bones is heard, as a woman appears to butcher an animal (no blood or gore are visible).
► A woman scolds a baby and lightly smacks the baby's behind. A baby slaps a woman in the face, and the woman scolds the baby.
► A toddler repeatedly hits an infant in the face with a biscuit until the infant begins to cry. An infant leans over to another infant and bites the child on the shoulder, causing the child to cry. A toddler hits an infant in the face and torso with a scarf until the infant begins to cry -- the toddler continues to hit the baby with the scarf.
► A man pushes a baby on a cart down a small slide, and the baby goes down but continues to roll away until it tips over into a sandbox; the man immediately picks up the child and soothes her. A baby is seen standing on a stroller, the stroller tips over and the child is heard crying. A toddler is seen pushing a baby carriage away from a yurt and leaving it unattended in a field of cows.
► An infant's bare buttocks are seen with what appears to be fecal matter; a woman lifts up the child and in the process gets fecal matter on her leg, which she wipes off with a corncob. A stream of urine is seen coming from a baby and landing on a table.
► A toddler is seen dragging a cat across a carpeted floor with a rope tied around the cat's neck; the cat is later seen unharmed. An unattended child is seen slapping a small goat repeatedly on the haunches, pulling the goat's fur and accidentally kicking the goat in the head.
► We see wires and tubes coming from the feet of a baby in a hospital, and hooked up to a monitor.
► As an infant eats, she spits food out of her mouth and into her hand, offers it to a man, and then puts the food back into her mouth.

MESSAGE - Though cultures may have great differences, the basics of childhood are very similar. 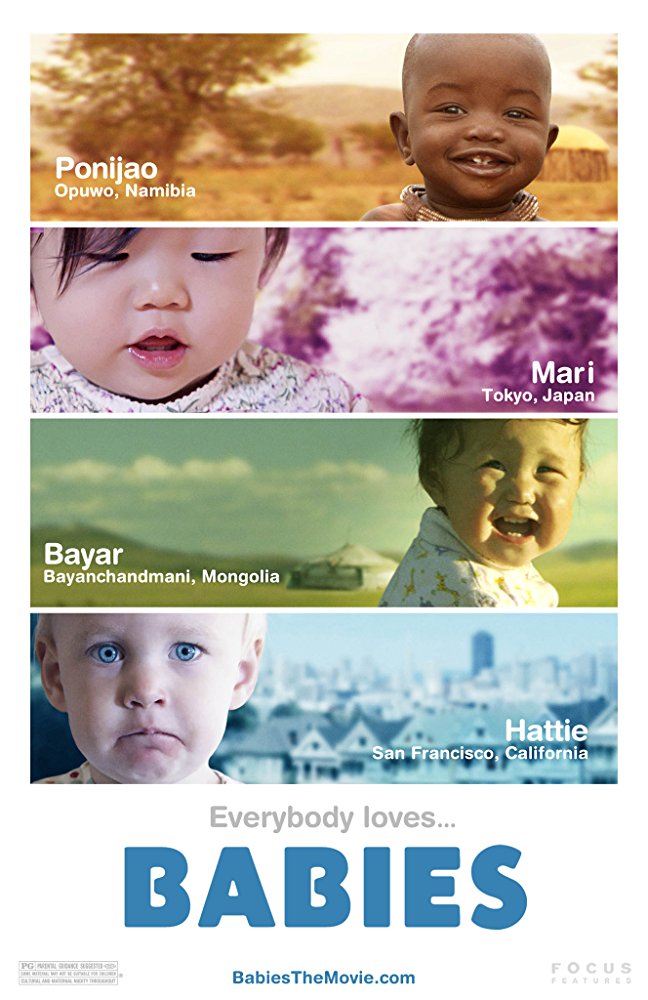