Why is “Arctic Dogs” rated PG? The MPAA rating has been assigned for “some mild action and rude humor.” The Kids-In-Mind.com evaluation includes a couple of kisses between anthropomorphic animals and some flirting, along with a couple of scenes of animals wearing briefs; several scenes of animals in peril in snow and ice, a few scenes of accidents that end with no injury and several characters are kidnapped and caged but escape unharmed; and some name-calling and exclamations. Read our parents’ guide below for details on sexual content, violence & strong language.” A fox (voiced by Jeremy Renner) uncovers a plot by a greedy walrus (voiced by John Cleese) to drill beneath the Arctic ice in order to unleash enough natural gas to melt the polar ice cap. The fox gathers a cadre of unlikely heroes and leads them into unexpected adventures while trying to save their homeland. Also with the voices of Alec Baldwin, Heidi Klum, Anjelica Huston, James Franco, Omar Sly, Michael Madsen and Laurie Holden. Directed by Aaron Woodley. A few words are spoken in Spanish, French and Italian without translation. [Running Time: 1:32]

– Two otters kiss in slow motion, briefly. A male and female fox kiss briefly in one scene and hug in another scene. A small puffin shakes its tail feathers into the camera — it looks like twerking.
► An otter calls another otter her life partner. A male fox and a female fox as children stare at each other and smile, mildly flirting. A female caribou says her husband left her for an elk 10 years younger than she is.
► A fox removes clothing down to its briefs. A large bird wearing jeans turns away from the camera and loudly unzips or zips its jeans.

– A fox escapes and scurries across snow and rooftops to jump onto a walrus on a huge drill; they struggle and the walrus pins the fox under an iron bar, and the fox escapes and pushes a button that blows up the drill; the walrus lands safely in the snow where puffins glare at it and fly away as a small rabbit with a pitchfork approaches the walrus and many other animals surround it. An otter punches a fox in the nose and in another scene punches the fox in the face, but neither strike causes injuries. A walrus shouts at an ox and grabs it by the throat with an iron claw twice, but it is not injured. An ice flow moves to a town on a bay where it drops ice and shows an iron structure that opens to reveal a giant drill; puffins fire snowball cannons from the structure at each other and a group they are chasing, a puffin stumbles when hit and loses some feathers and we hear, “Ouch” several times off-screen; a fox is struck in the crotch with a snowball and covers his crotch with his hands and groans, two characters fire assault-type snowball guns but miss most of their targets, and hundreds of puffins wearing helmets with spikes on top chase animals as a giant walrus laughs maniacally; the walrus is struck in the eye but suffers no injury and the walrus tells a fox, “I’ll make a rug out of your hide.”
► A walrus lowers a cage of animals into a boiling lake under an opened floor, but a fox picks the lock and escapes, and a bear tosses the animals up to another cage and finally jumps in himself at the last second. A fox is kidnapped inside a luggage trunk, carried away by unseen hands and later questioned by two spies. Three dogs are kidnapped and put into a cage. A fox is kidnapped, caged and followed by several other animals. A fox lands in snow, a bit gray from smoke and flames that rise from a loudly exploding drill; it groans several times and is fine in the next scene.
► A bear and a fox ride a sled down a treacherous mountain and over two rooftops, and then to the ground, where an ox shakes its fist as they pass; they then hit an entrance ramp to a building and stop hard, they are unharmed but the bear walks off-screen and we hear it retch and vomit (we do not see any goo). A fox that wants to be a husky steals a sled from its mail delivery job and struggles through a raging blizzard, grimacing several times, sliding and falling once (it is unharmed).
► A pile of snow falls on a fox in four scenes without injuring it. Several characters knock down other characters in snowy scenes, but no one is harmed. A still cartoon image shows a fox with its tongue stuck to a frozen pole. A bear sits on a fox accidentally, but the fox is fine. On a delivery route, a fox falls a few times, drops a package on its foot, and runs into a door, but is not hurt. A beaver falls out of a bucket as it tries to wash a second floor window, but is unharmed. Some puffins accidentally stick into an icy ridge by their beaks and can’t move. A fox steps in an inkpad and tracks foot prints across a desk, then falls out a door and off-screen, and we hear him tumble down a flight of stairs and groan, but we see no injuries. A puffin falls through a trap door and we do not see it again. A flashback shows a walrus angrily breaking a metal pointer in half.
► Two puffins attack three dogs in one scene and a fox in another scene, shooting pink mist into their faces to knock them unconscious. A walrus sits in an iron conveyance with six legs (looking like an insect) and we many puffins that are his minions; two of the birds slap and choke each other (neither is hurt).
► A caribou shouts at a fox several times. A walrus shouts at puffins a few times and calls them names. A male fox and a female fox argue briefly. A fox and a bear argue for several seconds. A character says that B.A.D. Gas under the ice is being released to melt the Arctic and the radio announcer states the temperature is climbing into the 40s F. A bear tells a fox, “You’ll fall into a crevasse and have to eat your feet” (we do not see this). We hear a walrus’ voice from inside a package being mailed to a jail. Several animals stand at a mail building, crying because no deliveries have arrived.
► A large drill twirls into ice and a geyser erupts and lights up the night in red light; a fox grimaces, says, “The planet made a poopie”, and passes out from the smell. A fox wakes up and gags and burps loudly in close-up twice the morning after a party (no drinks were consumed). A fox grimaces wildly several times when it drinks a blender concoction. A large bird uses a hanky to blow its nose loudly in close-up. A puffin flatulates loudly in close-up. A fox sneezes into the camera, but the sneeze is dry. A fox passes out in fear onto a mail conveyor belt but awakens and is OK. A fox uses an arc welder and a sander, creating sparks against metal. We see all the businesses in an Arctic town close down due to flooding (we see no floods).

– A young rabbit uses an inhaler and sighs happily, a large bird licks many postage stamps and acts drunk (it sways and slurs its words), and a bear tells a fox to get a tetanus shot to pull an old rusty sled (we see no injection).

– You can change the world in your own neighborhood by being yourself. 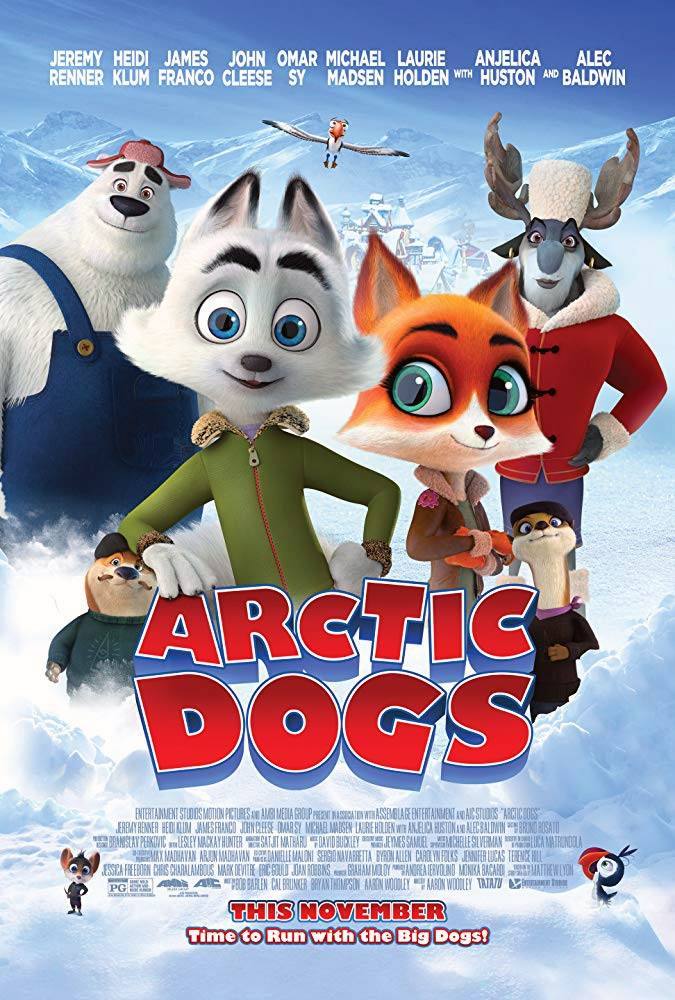