Several students of paranormal Psychology try to recreate an experiment performed in the '70s that supposedly resulted in contacting a recently deceased person. When the experiment goes horribly wrong and one of the students disappears, the remaining students endeavor to reverse the experiment. With Ashley Greene, Sebastian Stan and Tom Felton. Directed by Todd Lincoln. [1:22]

SEX/NUDITY 4 - A woman wearing a low-cut top that reveals cleavage wakes a man by climbing on top of him, he flips her on her back and they kiss (he is bare-chested and we see him wearing boxers that reveal his bare chest, back and legs when he gets out of bed).
► A woman opens her shirt and slips it off her shoulders (we see her wearing a bra top) while a man reaches for her bare shoulders to massage them and he remarks that she should take off her top. A man and a woman sleep together on a sofa (her head rests on his shoulder) and she is wearing a low-cut top that reveals cleavage and short shorts that reveal bare legs to the upper thigh.
► A woman undresses to shower and we see her wearing a bra and panties; when she steps into the shower we see her bare shoulders and we then see her flesh-toned silhouette through a frosted shower curtain. A man makes a negative comment about sleeping in a tent and a woman says to him, "Who said anything about sleeping?"
► A woman wears a short teddy top that reveals shoulders, arms, cleavage and panties that reveal bare legs to the hip (part of her bare buttocks show). Several women wear low-cut tops that reveal cleavage. A woman wears short shorts that reveal her bare leg to the upper thigh. We see a man's bare abdomen briefly when his shirt lifts. A woman wears a sheer T-shirt that reveals the bra she is wearing under it.
► A man and a woman kiss in a few scenes.


VIOLENCE/GORE 7 - Three people with monitors on their heads sit around a table and try to reach a deceased man: the table jerks and they are all started, they hear loud noises around the room, a camera is toppled over, a statue of the colleague in the center of the table glows and then breaks apart, the lights go off and a woman screams; when the lights are restored we see the woman being pulled up toward the ceiling and into the dark (we do not see her again and we see a video of this later).
► A woman hears a man calling for her, she opens a door and finds the man partially absorbed into a wall and his mouth opens unnaturally wide. A woman sits inside a tent and we see blue-tinged hands begin to wrap around her shoulders, her throat and eventually her mouth. A door opens behind a man seated at a table, he is pulled back through the door, and he grabs onto the door jam but eventually is pulled into the darkness.
► A dog stares at the ceiling in a room, it whimpers, lies on its side and dies (we see no injuries) and we see its human companion carry the body wrapped in a blanket out of a vet clinic later. A sheet pulls up and over a woman sleeping in bed, the sheet seals her under it and she begins to thrash and scream trying to breathe; a man tears at the sheet and eventually frees her before she suffocates.
► A dark figure moves toward a woman and she runs and screams. A man wakes up and finds himself stuck to the ceiling and looking down on himself sleeping on a sofa; he struggles to get free, sits up and gasps on the sofa and we see a bloody patch on the ceiling and on his back. A woman hears a noise in a room and nails the door shut; when she is finished she finds that she has nailed herself inside the room and sees what looks like a woman with blue-tinged flesh crawling toward her. A man and a woman lock themselves in a "safe room" (it looks like a big cage) and the man disappears. A woman goes outside a house and finds a pick-up truck partially absorbed in the ground.
► We see the silhouette of a man standing behind a shower curtain where a woman had just been showering. We hear audio of people screaming during an experiment, furniture in a room begins to quake, the ceiling cracks, doors expand, lights flicker and we hear loud noises and then everything is silent. A man crawls through a narrow crawl space under his house and finds dark and gooey staining on the floorboards; as the man crawls through with a flashlight, he hears sounds behind and around him and he becomes alarmed. Something pulls down a mounted security camera, and it moves along the ground and very close to a sleeping woman's face (she does not wake up). A woman is alarmed when she wakes up and finds the doors to her house wide open; she and a man walk through the house searching for an intruder when they hear noises but find nothing. A woman is alarmed when she finds all of her clothes tied in knots and hangers twisted and broken in her closet; we see large scratches and gashes on the wall behind the clothing. A dresser moves over several inches by itself. A man carries a baseball bat while exploring around a house; when he returns to the tent where a woman has been sleeping he stumbles on a security camera that had been hanging on a nearby wall (the camera is crumpled). A man carries a baseball bat through a house where he and a woman are hearing strange noises (they find nothing). A garage door opens by itself. Everything in a house is in disarray with furniture hanging from the walls and ceiling.
► A woman opens the door to a garage and we see things growing on the walls and the car and we hear voices and low rumbles. We see a huge, growing hive-like thing in a house and a man pokes it with a broom handle causing debris to fall to the floor, including a broken statue of a man. A woman pulls up some flooring and finds black and gooey staining. A cactus dies within a short time in a house. Several security cameras are dismounted and destroyed.
► A woman uses a thermal imaging detector as she walks through a dark house, we see what looks like a face in a corner and screams when something appears on the screen.
► A woman yells at a man and tells him to get out. A young girl slams on the window of a car startling the woman inside and says, "Your house killed my dog." A man yells, "Something came through and now it's loose" after an experiment. A woman says, "It scared me to death."
► We read about an a experiment performed in the '70s where a group of paranormal psychologists attempted to reach a recently deceased colleague and we watch a video (there's no sound) that shows several people seated around a table with their hands on the table, which begins to shake and bounce around (no one is harmed). A man talks about the "containment of an entity" and "capturing our belief" on a video before an experiment is performed. We hear that several people died, committed suicide or disappeared after an experiment. We hear a man's voice saying, "They are taking life" and "It wears you down, then takes you."
► A woman throws chips jokingly at a man who is seated across a table from her.

SUBSTANCE USE - Several cases of beer are stored in a garage, a man opens two beers and a woman drinks from one, and a man drinks a beer.

MESSAGE - Some things are inescapable. 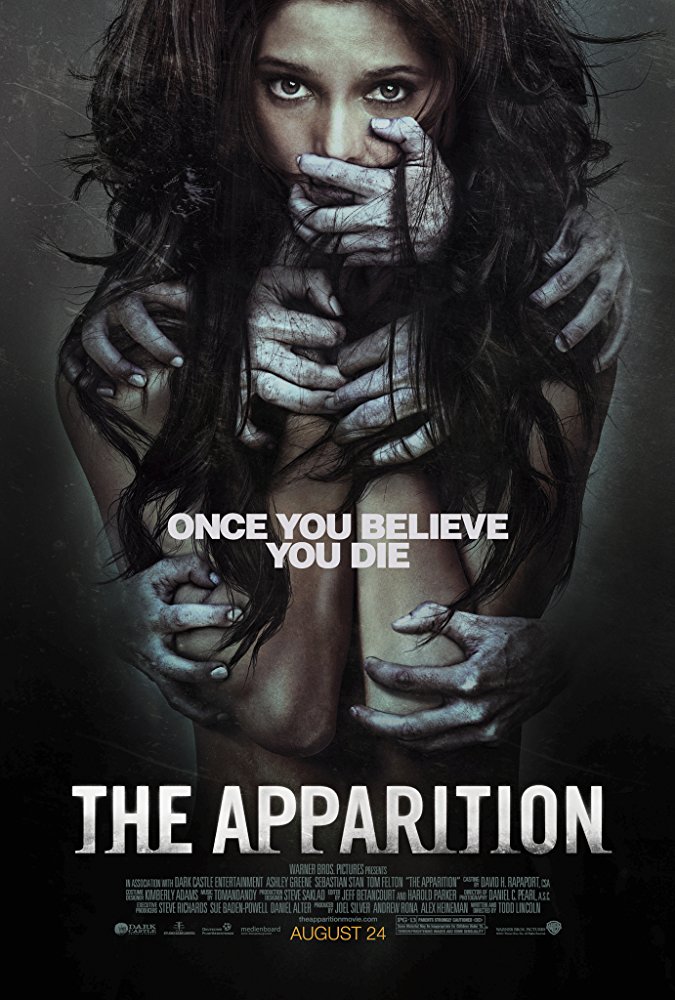