Horror film about a fictional final Apollo mission to the moon: old footage allegedly from NASA's abandoned Apollo 18 mission reveals that two American astronauts were sent secretly to the moon where they uncovered horrific life forms. With Warren Christie and Lloyd Owen. Directed by Gonzalo Lopez-Gallego. [1:28]

SEX/NUDITY 1 - A wife sits on her husband's lap and he wraps his arm around her waist.
► A man talks about getting jalapeno pepper juice on his genitals and that he screamed in pain and was told to dip his genitals in a cup of milk (which he did).
► A woman wears a low-cut dress that reveals cleavage.

VIOLENCE/GORE 5 - Many creatures with crab-like legs crawl on an astronaut's face until his head appears to explode and blood splatters on a vessel window.
► Many creatures attack an astronaut and he screams and thrashes. We see a bloody spot on an astronauts shirt, he pulls back his shirt to reveal a large, bloody gash, and another astronaut uses a tool to dig something out from the hole (we see blood and tissue and the tool going inside the hole); he pulls something out (it's impossible to make it out), it screeches and splats on the floor. A man's skin darkens and his eyes become extremely bloodshot as the infection from a wound worsens; he becomes violent. A man is seen with an infected wound on his torso and dark lines under his skin and his eyes are severely bloodshot.
► An astronaut hammers on the window of a lunar lander and it nearly cracks through as another man screams at him to stop. Two astronauts abandon their lunar lander and drive away in a vehicle; one astronaut jumps off the vehicle and tells the other one, "Leave me." An astronaut finds another astronaut lying against a rock and his breathing is very labored; he struggles to get back to the lunar lander where he is plugged in to an oxygen supply. An astronaut with a hammer hammers parts of the vessel he and another astronaut are on; the other astronaut struggles to make him stop before letting all the oxygen out. An astronaut pokes something that looks like a rock to try to figure out what it is and another astronaut slams it with a hammer, shattering it into many pieces (one yells at the other complaining that he had contaminated the whole ship). Something is seen skittering inside a lunar lander.
► An astronaut is pulled into a darkened crater, another astronaut follows him, he sees what looks like small rocks and they appear to sprout legs and walk toward him as he runs away hyperventilating. An astronaut follows footprints found on the moon's surface and goes into a darkened crater; he complains of the cold, his voice sounds panicked and we see a quick glimpse of the skeletal face and head of another man. Two astronauts investigate the body of another astronaut and one finds a hole in his suit and a hole in his helmet. Astronauts discover an empty Russian lunar vehicle and upon investigation find that it has been trashed (wires are cut and items are thrown around) and there is blood inside. An astronaut finds a shredded flag and footprints around it.
► As a lunar lander approaches the moon's surface we hear one of the crewmen say, "We're coming in too fast"; they land without a problem. We see power fluctuations on a lunar lander and through cameras in a few scenes.
► Two space vehicles crash together and apparently kill the two men onboard. A lunar vehicle is overturned by something unknown and its antenna it left unusable. Astronauts sleeping in a lunar lander are awakened by noises and they are unable to determine where they are coming from. Astronauts see that the flag that they planted the day before on the moon's surface is now missing.
► An astronaut says, "Something's moving, it's in my suit, it's in my helmet," he screams and we see something that looks like a crab running across his visor. An astronaut grabs another astronaut's hand and tells him never to touch him again (the astronaut is looking at the other astronaut's infected wound). A voice over a radio says to an astronaut on the moon, "We cannot bring you home." A voice over a radio tells an astronaut that "We will tell your families that you died heroes." An astronaut in an orbiter says to two astronauts on the moon's surface, "Don't make me leave you," when he cannot reach them by radio.
► We read that three astronauts died in independent crashes and their bodies were never recovered. A lunar mission is billed as being "unmanned" although there are three men onboard the craft.

SUBSTANCE USE - People drink beer at a cookout, and a man talks about another man having a few too many.

MESSAGE - Don't trust your government to tell you the truth. 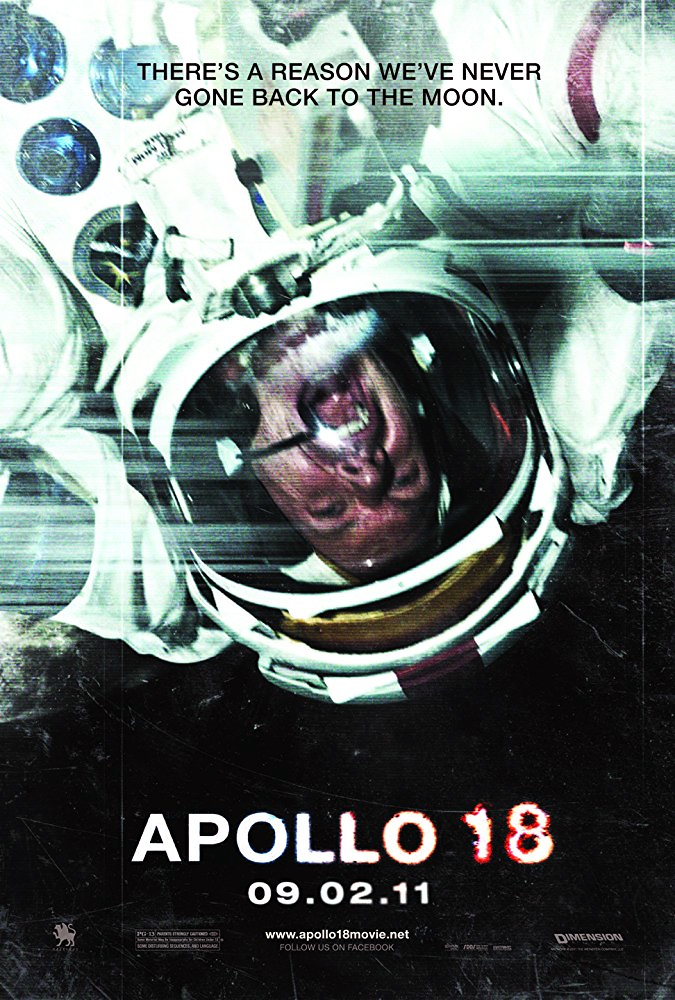