Rob Schneider dreams of being a cop but his size and lack of physical prowess are in the way. His life changes though when he's injured in a traffic accident and he needs several organ transplants. A loopy scientist surreptitiously uses animal organs to fix him up and the cop wannabe is now endowed with animal instincts and strange super powers -- as well as animal manners. Also with Colleen Haskell, Michael Caton, Edward Asner and Cloris Leachman. [1:23]

SEX/NUDITY 4 - A man and woman are shown in bed after having had sex; she is in his shirt and he's in a bathrobe. A man thrusts his hips at a mailbox. A man is aroused several times, he excuses himself and we hear animal noises coming from the bathroom. A man and woman kiss a few times. A man caresses a woman's shoulders, a man licks a woman's face, and a woman licks a man's face. A man comes out of a shower bare to the waist. A woman is shown in a really tight and short dress revealing lots of thigh and cleavage. Two women are seen in a TV ad wearing small bikini tops exposing some cleavage. A woman dances in a midriff-revealing costume, and a woman wears a slinky dress which reveals her bare back. An orangutan kisses a woman. A monkey in a nightie is sent to satisfy a man's sexual urges. A man is aroused by a goat in heat (he flirts with her, dances, baas and kisses her). A man licks himself up the leg to the crotch.

VIOLENCE/GORE 4 - A man drives off a cliff, his car rolls many times and stops by running into a tree; then it continues to fall and lands hard, and finally a boulder rolls over it (we see the man holding his leg next to his face and he passes out). A boy nearly drowns in a pond. There are descriptions of crime scenes which involve an attack on a cow and another on a hunter. A man is shot at several times and threatened by an angry mob with guns. A man tries to jump a crevasse, falls and dangles from a vine. A man is attacked by an unknown beast. A man head butts a man in the stomach and sends him flying back into a dumpster. A man runs through an airport, tackles a man and snarls and bites his leg. A man is heard on the phone reporting a robbery and we hear gunshots and yelling. A man is knocked in the face with a dumbbell and a man is knocked from his horse by a tree limb. During the running of an obstacle course a man sets himself on fire, a woman kicks and punches a man, a man throws sand in a woman's face, a man is shot in the chest and a man is shot in the crotch (both are wearing bulletproof vests). An orangutan hits a man in the head five times and they have a raspberry blowing contest. An orangutan also pounds a man's head on the ground and a man pinches the orangutan's nipple to make him stop: they wrestle each other with body slams and choke holds. A man is kicked by a goat and is thrown for several meters. A man chases a cat through a music stand knocking people and instruments; the cat emerges from shrubs missing patches of fur. A woman is shot in the head with a dart and a man is shot in the neck with a dart; they both faint. A rifle falls from a bookcase and fires a shot. A man is shown with a little scar on his chest and a huge scar on his back. A group of children handcuff a man to some shelves then hit him with a stick and spray-paint his shirt. A man digs in the garbage for a bone, and a man wakes up in a butcher shop surrounded by half-eaten meat parts. A man sits at a table full of bones after having eaten all the meat. A man urinates and passes gas in a men's room, and later he urinates on a restaurant dining table and the front stoop of a house. A man sniffs another man's behind, sticks his hand in his pants, feels around his behind and pulls out a balloon full of drugs. A man barks violently at some gang members. A man chews up a worm and allows a turkey vulture to eat it from his mouth. A badger is shown attached to a milking machine. A dog jumps on a man and bites him and later chases him, and other dogs sniff a man's behind. A man swings from tree to tree to escape being shot. A truck drives recklessly and flips over a tree stump. A man coughs up a huge fur ball. A lion attacking a caribou is shown on TV. We see a couple of scenes from the perspective of an attacking animal; we hear growling, the camera moves frantically, and in one scene a man tries to run but trips and falls down. Nothing else is evident.

MESSAGE - There's someone for everyone. 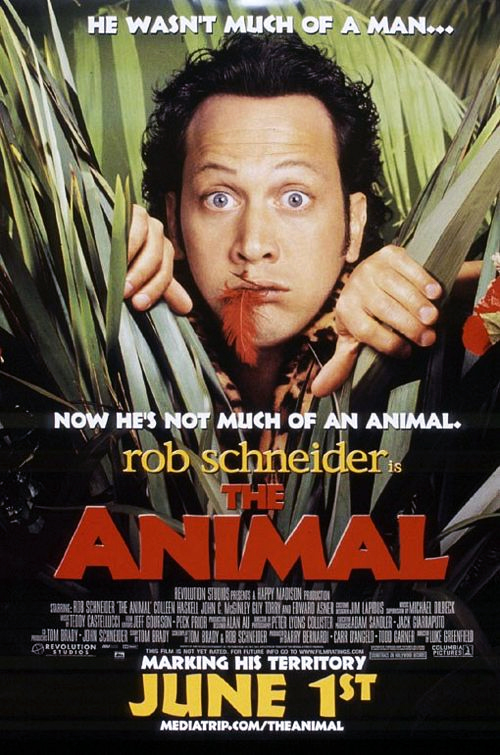