Adam Sandler stars as a mild-mannered businessman who's wrongly accused of assaulting a flight attendant and is sentenced to spend time in an anger management program run by a man (Jack Nicholson) who has temper control issues of his own. During his treatment Sandler ends up losing his girlfriend, getting passed over for a promotion, and lands back in court with another assault charge. Also with Krista Allen, Marisa Tomei and Allen Covert. [1:43]

SEX/NUDITY 5 - Two women kiss passionately, a man and a woman kiss a few times, a man kisses a man on the cheek, and a woman kisses a man and then blows him another kiss. A woman sucks on another woman's finger and a woman caresses a man's thigh. A man dressed as a woman tries to seduce another man. Two women talk about having sex with a man, together. Two women talk about working in the adult film industry and say that they are lovers. A woman takes off her shorts and top in front of a man, we see her in a bra and panties and she invites a man to have sex with her. Two men share a bed, one removes his clothing under the covers (we see his bare shoulders) and rolls over placing his arm over the other. A girl dares a boy to kiss her and he leans forward to do so. Two women wear very revealing outfits throughout the movie, exposing cleavage, bare abdomens, thighs to the hip, bare backs and shoulders. A woman wears a low-cut, tight-fitting dress that reveals her cleavage, bare shoulders and back. A man has a tattoo of a woman on his arm and it shows stocking covered thighs, a bare buttock and pubic region. A boy's pants are pulled down (we see his bare buttocks) and the people around him laugh and make fun of his endowment. We see a man's buttocks in a thong. A woman in a movie wears an outfit that reveals her cleavage. We see faked, computer-enhanced photos of a man and a cat in sexual activities (we see the man French kissing the cat and pinching its nipples). A man looks down at another man's endowment while using a urinal. People make descriptive remarks about the size of a man's endowment several times. A man talks about a man's sexual ability.

VIOLENCE/GORE 3 - A man shoves a man a couple of times, a man charges at a man and tackles him, they fight rolling around on the ground, one head-butts the other, twists his nipples, and the other knees him in the groin. A man jumps out of a tree and lands on another man. A man slaps a man on the head, they fight with punches and shoving, another man gets involved, he is hit on the back with a cane, he grabs the cane and hits a woman in the face (we see her bruised nose and eyes later). A man is punched in the face twice, another man is punched in the face, a man steps on a man's face. Several men chase and try to tackle a man; he throws one man to the ground, he hits one, and a couple dive toward him but miss and hit the ground. A man attacks a man and shoves him back out of a chair. A man and woman yell at a man, the man yells back and is then tasered in the chest (he goes limp after the jolt). A blind man is hit in the head with a tennis ball, and a man throws a calculator and it hits another man in the face. A bully gives a boy a prolonged wedgie. A man threatens a man with a gun. A man pulls a gun on a group of men and then squirts them with it. A man takes a swing at another man's face. A woman talks about another woman having bitten her toe off. A man throws a plate of food at a wall and yells at a man. A man breaks the window of a car with a bat, the car rolls backward and falls off the top of a hi-rise parking garage crashing to the ground. A man hits a lamp with a golf club. A man pulls the emergency brake on a moving car, it skids to a stop and many cars behind them screech and swerve to avoid hitting them. A man drives recklessly. Many people drive by a stopped car yelling obscenities at the driver. A man yells at a man and a cat hisses at a man. A woman shoves cupcakes in their mouth and throws some at a man. A man throws a teddy bear off a roof. A man holds an electrostatic wand over his head (we see the blue bolts dance around his scalp). A man says: "I'll tear him apart with my bare hands." Two men accidentally bonk heads. A man flatulates and a man talks about defecating on a porch. Two men stand at urinals in a public restroom.

MESSAGE - Temper is the one thing you can't get rid of by losing it. 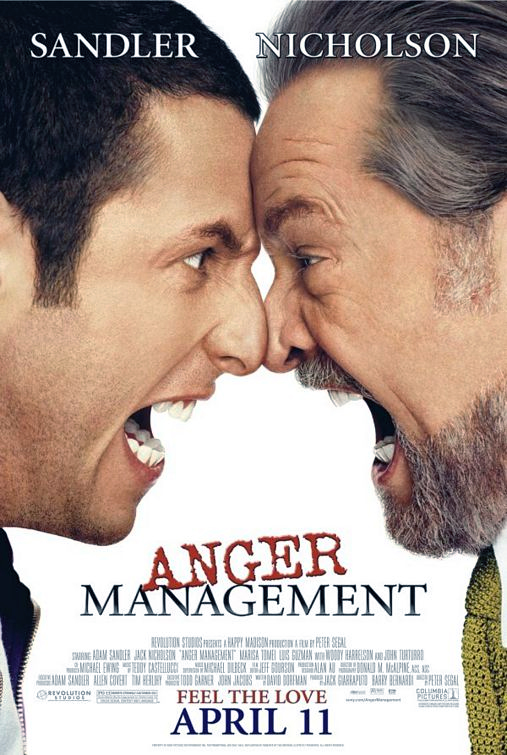