A group of scientists undertakes an expedition into the thick jungles of Borneo hoping to find a rare orchid that blooms only once every seven years, and may hold the key to extending human life. They don't anticipate the dangers that await them, including the monsoon season and giant, hungry snakes that derive their size and strength from the flowers. With Johnny Messner, Morris Chestnut, Eugene Byrd, Nicholas Hope and Peter Curtis. Directed by Dwight H. Little. [1:33]

SEX/NUDITY 4 - A man caresses a woman's neck and tries to kiss her (she rebuffs him). A man makes a pass at a woman, inviting her to have sex and offering her a guarantee if she is not satisfied. A woman comes out of a man's cabin in the morning and appears to be adjusting her clothes (suggesting that they have had sex). A woman leans over a table and talks to a man while her top is low cut and reveals cleavage. A man and a woman flirt and appear to be attracted to each other. Two men admire a woman as she walks by (she wears a short skirt that reveals bare thighs). A man is bare-chested while shaving. Women wear low-cut tank tops that reveal cleavage. There are comments made about a woman having gotten her professional position by having a sexual relationship with her boss. People talk about a snake's mating season, describe the process as a "mating ball," and refer to it as an orgy.

VIOLENCE/GORE 7 - A huge snake faces a man sitting on the floor, the snake lunges at the man, we see the man's legs thrashing as the snake takes him into the rafters of a building, we see the snake devouring the man (his legs go into its mouth, which is lined with sharp teeth), and the building is set on fire. A man is jerked back into water, he is thrashed around, we see blood on his arms and torso, he screams and is dragged under water; then an enormous snake rears up out of the water and grabs the man by the head (we see the man's legs hanging out of the snake's mouth). A group of people scramble to get out of a narrow passageway while being chased by a large snake that hisses and slithers: one man is stuck, is pulled out followed by the snake, people scream and panic and the snake's head is hacked off with a machete. A man falls into a hole and is trapped under water; a huge snake lunges toward him, biting him in the stomach and taking him away. Two men fight with punches and kicks, one climbs down a steep wall, is bitten by a spider, falls into a pit full of huge snakes, he is constricted and then eaten by several snakes. A snake bites a man from the back, drags him through jungle brush, holds him coiled in a tree, another man throws a knife into the snake, it goes limp and drops the man to the ground (the man doesn't breathe for a few moments). A woman walks across a fallen tree trunk, it begins to break and there are many large snakes below her in a pit; she crawls back across the trunk, it breaks again and she dangles from vines, tries to pull herself up and falls into the pit of snakes, but manages to get away. A man is shot in the arm (we see the bloody wound). A woman falls off a boat and into a river (she has a cut on her arm that spills blood into the water), something large charges toward her, and a man jumps into the water and wrestles a large crocodile stabbing it repeatedly with a knife (we see water stained with blood); the man is dragged under water and is gone for some time before resurfacing (he has a bloody scratch on his neck but appears otherwise uninjured). A decaying and slime-covered corpse falls in front of people as they walk through a thick jungle. A huge, dead snake lies on the ground, with the legs of a man sticking out of a hole in its body (blood and slime cover the person's legs). A boat careens over a large waterfall, and when it crashes into the water below all of the passengers are thrown into the water (we see them struggling to the surface). A man is bitten by a spider, he gasps and begins to go limp (the spider's toxin leaves the victim paralyzed), and we later see the man gasping and his face is swollen. A group of native people track a tiger in a thick jungle, they hear noises, the tiger jumps over one of the people, jungle animals panic and screech, and a huge snake grabs a man and pulls him up into a tree; another man falls into water, something charges toward him, grabs him from below and pulls him back into the water as he struggles to get out (he screams and disappears under the water). Something knocks a boat from under the water: it's apparently a huge snake (we don't see it) that slithers up onto the deck of the boat and lunges for a man who reaches for a gun -- we eventually hear the man scream, hear an explosion then see the burned-out rubble of the boat. We see a large snake circling a group of people as they walk through water. A monkey is chased by a huge snake, it hides in a fallen tree trunk, the snake enters hissing and extending its tongue, and the monkey screeches and runs up a tree while the snake follows; we hear a loud screech and a man says, "something was just eaten" (we see the monkey later and it is uninjured). A huge snake is shot with a flare gun, and it falls into a pit full of other snakes and explodes. A huge snake slithers out of a pit and is squashed by a large rock. A man has a leech on his neck, and another man burns it off (we hear a sizzle as the flame touches the leech), then the man lifts his shirt and his back is completely covered with leeches. A man is frightened when he finds a room filled with skeletons. People hear hissing in a dark jungle and panic, and they run and fall down a hill ending up in a cave. A woman has a large gash on her arm and we see a man tying off the thread after stitching it up. A dead crocodile is pulled under water and disappears. A man is nearly bitten by a dangerous spider. People jump and scream when a monkey jumps onto a table and screeches. A monkey jumps out of a closet and onto a woman who panics and screams. A man is hit on the back of the head with a gun. We see piles of human bones and skulls in a burial ground. A man talks about a tribe of headhunters. A man's feet are bloody and blistered after walking for a long period. A man shaves with a knife. People are stressed and nervous while trudging through a jungle, hacking at thick brush and wading through water.

MESSAGE - Sometimes we do things for the wrong reasons. 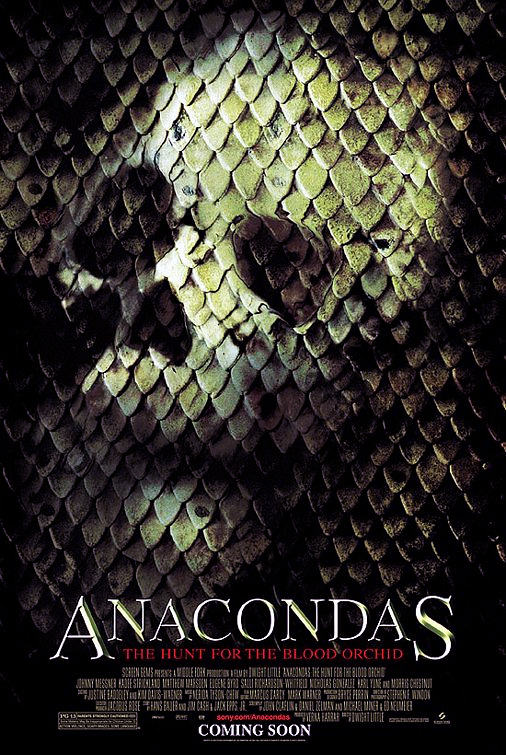