A single mother (Nisreen Faour), who leaves occupied Palestine with her teenage son (Melkar Muallem), dreams of a new future in America. After settling in suburban Illinois the two struggle with looking for a job, racism, and the conflict between their desire to maintain their ethnic identity while at the same time assimilating in their new country. Also with Hiam Abbass and Alia Shawkat. Directed by Cherien Dabis. Partially in Arabic with English subtitles. [1:37]

SEX/NUDITY 2 - A woman wearing a low-cut top mimics a dancing toy by thrusting her hips in a circular motion. A woman getting dressed exposes a small portion of her bare lower back and her bra (we see cleavage and her bare abdomen); a teenage boy walks into the room and leaves immediately). A woman takes off her shirt exposing the top portion of her bra and cleavage. A woman is shown exposing cleavage when she lies on her side in bed. A woman stares at another woman wearing a tight, form-fitting and cleavage-exposing dress. A teenage boy lifts his shirt after being ordered to do so by a soldier and turns in a circle to reveal his bare back, torso and chest.
► A teenage boy and a teenage girl kiss passionately, but are interrupted by a teenage boy who approaches them.
► A woman laughs at another woman who is gushing over a man sitting beside her, and tells her that she is obviously flirting with the man. A woman jokes with a man attempting to flirt with her. A woman discusses with a teenage boy how she had been in a relationship, but the relationship had come to an end when the man found a new, younger and prettier wife. A teenage boy tells another teenage boy that he is interested in getting an "American girlfriend," and he laughs and tells him to get one for him as well. A woman reads aloud a tabloid cover that says, "Adopt An Orangutan Love Child." A teenage girl asks a teenage boy not to mention that they had been with a different teenage boy earlier, since her parents do not like it that she is in a relationship with him.
► A man and a woman dance together. A young girl and a woman share a bed (non-sexual).

VIOLENCE/GORE 4 - Two soldiers with semi-automatic rifles stop a car with a woman and a teenage boy, the boy makes a snide remark about not wanting to wait, one of the soldiers shouts, orders him out of the car and insists that the boy lift up his shirt to see if he has a bomb. A teenage boy is angrily instructed by a soldier to lift up his shirt so the soldier can examine him for weapons.
► A woman and teenage boy sit in a car while a soldier carrying a semi-automatic rifle asks the woman to open the trunk of her car.
► A teenage boy with a bruise on his face tackles another teenage boy as he walks through a door, and they struggle on the floor; one straddles the other and punches him in the face repeatedly, while a teenage girl watches and the boys shout at one another, calling each other a "terrorist." A teenage boy shoves another teen boy in a school hallway, slams him into a locker and hits him in the face (we see the boy later with a light bruise and a small laceration; no blood is visible).
► A man holds up a bat to attack a person walking in the door and lowers it when he realizes it is not a burglar.
► A woman with a mop shoos away three teenage boys after they mock her with racially insensitive questions and pour her drink onto the floor -- she slips on the spilt drink and lands on her back wincing and appears to temporarily black out.
► Three teens let the air out of the tires of another teenager's car and when he realizes what has happened he shouts and runs after them.
► A teenage boy makes a racially insensitive joke by asking a classmate of Arabic descent if he is going to "blow up" the school. A man makes a crude joke to a woman asking, "Are you going to blow the place up" after he learns that she is an Arab. During a classroom discussion a teenage boy says that Americans will not "kill innocent people because they're not innocent," and then makes other racially charged comments directed against an Arab student. A woman says that a teenage boy is "like a deaf person at a wedding march." A woman confides in another woman that she thinks Americans do no like Palestinians. A teenage boy and a woman get in a heated argument about his inability to assimilate at school because people think he is going to blow up the school based on his ethnic background. A man and a woman argue in front of another woman. A man and a woman have an argument in hushed, but angered voices. A teenage boy and a woman get in a heated argument and the teenage boy tells the woman to "get out of my grill." A woman argues with a man. A woman shouts at a teenage boy to wake him, grabbing and shaking his arm to rouse him. A man angrily shouts at a woman and tells her he refuses to leave until she completes his tasks. A woman shouts at a young girl to be quiet. Three teens say that they could beat up a school bully who had been making racially charged remarks. A woman tells a man he should be a man and purchase a gun, but the man disagrees and says that a gun is not the way he chooses to defend himself. A woman asks another woman if she is in possession of any weapons, including guns and automatic weapons or drugs of any type, including heroin or cocaine. A woman shows another woman a death threat that she received in the mail (we do not see it) that reads that someone will "Kill Saddam, then your family." A man tells a woman about a news story where more than 35 soldiers had been killed and laughs that it was an "accidental" death, and that there had been a bombing that had destroyed ten homes and killed three people that day as well. A man tells a woman about a news story concerning the dropping of 38 bombs in less than ten minutes in their former homeland. A woman tells another woman that she has not seen her son in three days following his detention at a military checkpoint. A teenage girl tells a woman that a teenage boy had been arrested, but that they cannot ask her parents for help because they would "kill her" if they knew she had snuck out of the house. A man and a woman discuss how people unfairly believe that all people of Arab decent are Muslim extremist, interested only in violence. A policeman tells a woman that while a teenage boy was not being charged with assault, he was being held for questioning, and that they were holding him for "special circumstances." A woman tells a man that her son had received a black eye during a fight at school. A teenage girl asks a man what will come of a country once it has been engaged in war. A teenage boy tells a woman that he feels like he is in prison in his own country. Two teenage boys purposely mispronounce the name Fadi as "fatty" to mock a teenage boy. A teenage boy makes a racially insensitive joke about an Arab woman's son being "Osama," infers that she is a terrorist and tells her that if she doesn't like it, she can just leave.
► A woman driving a car pulls out into traffic, narrowly missing an oncoming car whose driver leans out the window and shouts at the woman, causing her to cry. The sounds of a shouting young child wake a woman. A dog, being restrained by a woman, barks angrily at another woman who is visibly shaken.
► A teenage boy playfully throws trash at a young woman. A teenage girl playfully shoves a teenage boy.

MESSAGE - You must rely on yourself and the love of those around you to get you through the toughest of times. 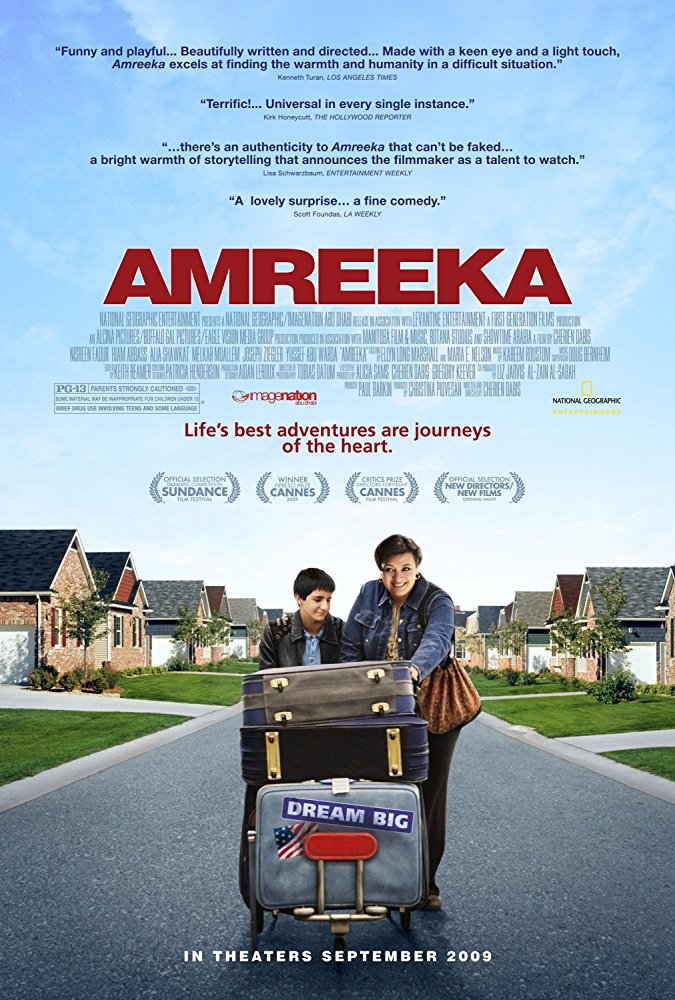