The kids from "American Pie" are all young adults now and perhaps ready to settle down. Indeed, one couple (Jason Biggs and Alyson Hannigan) is getting married but first they have to survive a bachelor party and all manner of other traditional and untraditional rites. Meanwhile, the groom struggles to keep his bride-to-be from getting too anxious. Also with Eugene Levy, January Jones and Seann William Scott. Directed by Jesse Dylan. [1:35]

SEX/NUDITY 7 - A man finds a woman in a closet (it's dark), we hear kissing and rhythmic movement, when a light shines on them and we see an elderly women sit up (she has bare shoulders) and we later see her with a very gratified look on her face. A woman climbs under a table in a restaurant and judging from the man's reaction, she is apparently performing fellatio. A woman sits covered with bubbles in a bathtub, a man's head comes up from under the bubbles and then she pushes him back under (he's apparently performing cunnilingus). A man and an older women go to the woman's hotel room (presumably to have sex). A woman tears off her jacket and exposes her bare breasts, another woman's top is open and we see her bare breasts, a woman takes off her top and we see her bare breasts, and a woman bends over and we see part of her bare buttocks. A man and a woman hug, the man steps back and we see a large bulge protruding from his boxer shorts. A man and a woman kiss, a man kisses a woman, a woman kisses a man, men kiss men, women kiss women and they dance together in a gay bar. Men make passes at another man in a gay bar. Two women caress a man who is taped into a chair. A dog licks the crotch of a man who has cake icing smeared on him, a dog thrusts at a man's leg, and people who see the thrusting assume that it is an instance of bestiality. A woman teases men by dusting them with a feather duster, and another whips them with a whip. A man makes repeated sexual gestures behind two women, unbeknownst to them. A woman asks another woman about a sexual implement. Two men have a dance competition with hip thrusting and sexual gestures. A man talks to his son about marriage and sex, and a man talks about oral sex. A man wiggles his bare buttocks out a car window, and a man wears pants with holes cut out that expose his bare buttocks. A woman sits in a bra and panties and a man ogles her from the doorway. A man stands up and his pants fall around his ankles (a restaurant full of people see his bare buttocks). Two women tear off a man's clothing, and a man in his boxer shorts covers himself in chocolate sauce after a woman says she will lick him. Women wear outfits that reveal cleavage, bare legs, bare abdomens, backs and shoulders. A man shaves the hair from his crotch and the hair ends up being sucked into a kitchen through a fan (we see the hair stuck to a wedding cake). A song repeats lines about a woman's climax.

VIOLENCE/GORE 3 - A man punches a man in the crotch. A man twirls a girl while dancing and she crashes into a waiter knocking the tray into the air. A man picks up dog feces (we hear squishing) and ends up eating it (we see it in his mouth as he talks and see it stuck to his teeth).

MESSAGE - We can accomplish anything when we are surrounded by friends. 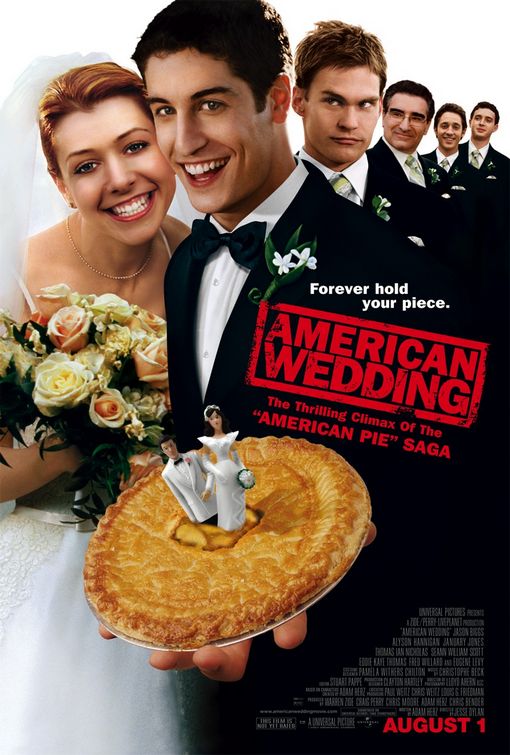