Alvin and the Chipmunks find themselves without Dave when he is injured and must recuperate in the hospital, and so end up staying with Dave's slacker cousin who couldn't be less interested in them and sends them to school. There they must deal with the bullies on the football team, try to save the music department from budget cuts and do an all or nothing throw-down against the Chipettes. Also with Zachary Levi, David Cross, Jason Lee, Wendie Malick and the voices of Justin Long, Matthew Gray Gubler, Jesse McCartney, Amy Poehler, Anna Faris and Christina Applegate. Directed by Betty Thomas. [1:28]

SEX/NUDITY 2 - A large crowd screams and cheers at a concert and teen girls are shown swooning over the chipmunk singers. Teen girls giggle and flirt with three chipmunks. A chipmunk kisses a teen girl's hand and she swoons.
► A man sings a song to a woman about "Being my girl." A chipmunk says that a woman is "Practicing her pole dancing." A remark is made about a chipmunk having "Junk in the trunk." A chipmunk calls to a crowd, "Shake what your mama gave you." A chipmunk says, "Call me" to a teen girl.
► Three female chipmunks dance and sing using suggestive hip gestures. Three female and three male chipmunks look at each other longingly and moan.
► We see a man wearing a robe in a couple of scenes (part of his bare chest is seen). A man wrapped in a gold piece of fabric (like a dress that reveals chest and back) and wearing high heels pretends to be a chipmunk and tries to sing (he is escorted off-stage by security). A man is shown wearing boxer shorts and a T-shirt while sleeping.

VIOLENCE/GORE 3 - A huge board that swings across a stage strikes a man, he is thrown, and we hear a crash and see him afterward in a cast and braces with multiple contusions in the hospital.
► A woman in a wheelchair bounces backward and down a flight of stairs and crashes into a cart (we see her being placed on an ambulance and see the twisted remains of her wheelchair).
► Several teen boys chase three chipmunks while yelling threats, one chipmunk is caught, his head is flushed in a toilet, the chipmunk calls out that he can't swim and another chipmunk helps him out (we see him wet but otherwise unharmed; another chipmunk gives two boys wedgies (they yell and grimace).
► A man walking on crutches slips on a skateboard and we hear a crash and a yell. Chipmunks push on a hospital bed remote causing the man in the bed to be flung into uncomfortable positions; one chipmunk is flung into a bedpan. A remote controlled motorcycle speeds into a man's crotch (he rolls on the ground in pain). A man in a hospital bed in casts and bandages is pulled into the air by a cable around his leg and he yells.
► Chipmunks dodge people walking and dragging luggage in an airport. Chipmunks dodge people walking, a teen boy bouncing a basketball and another riding a skateboard (the teen on the skateboard swerves, and we hear him fall down a flight of stairs). Three chipmunks are struck hard by dodge balls; they are pinned against a wall and slide down to the floor.
► A chipmunk becomes stuck when climbing through a mail slot, and a man pulls hard on her legs and frees her, but she falls on the floor hard. A man remembers being bullied and harassed when in high school (we see him being pinched, struck by dodge balls in the head and face and getting a swirlie).
► A large bird of prey stands over a chipmunk and squawks, the chipmunk runs, and another chipmunk pushes the first through a fence to safety and barely makes it to safety himself. A man picks up three chipmunks by their tails and threatens to barbecue them.
► A dog barks at chipmunks shown on a TV screen, knocks the TV over, breaks the screen and continues barking. A man stumbles into band instruments knocking them to the floor and tearing a drum. A chipmunk throws a remote into a television screen and shatters it. Three chipmunks tear their way out of a Fed-Ex envelope and fall on the floor unharmed.
► Several chipmunks dangle from a remote controlled helicopter that is flown by a man who is trying to harm the chipmunks; the chipmunks retrieve the remote and land themselves safely. A chipmunk dangles from a stage scaffolding and swings from a rope high above the stage and audience. Chipmunks spin around in a food processor bowl, are thrown and dangle from a hanging pot rack; one complains that "I'm gonna puke."
► We hear that a chipmunk threatened a teen boy that he would "Climb inside him and build a nest." A chipmunk has a bad dream and says that he dreamed that he didn't have a family anymore. A man describes an eagle swooping down and grabbing a chipmunk, and the chipmunk runs away in fear. A man talks about his car running away and that he sees it from time to time but it always hisses at him. A teen boy threatens chipmunks and says, "You're dead." A man yells at and threatens chipmunks in several scenes. A chipmunk threatens to eat a football player. A chipmunk calls a man "The devil." A cat hisses at three chipmunks and a man.
► We see a man living in a basement, picking food from a large garbage bin and fighting a rat of scraps of food. We see several pieces of stale food strewn around a house and on furniture. Three chipmunks hide in a toilet tank. A chipmunk is trapped under a blanket when a man flatulates, and the chipmunk scurries under the blanket and yells, "It burns." Several teen boys mock a chipmunk and throw him into the garbage. Two chipmunks fight in a garbage dumpster (we see food being flung around). We see a few teen boys cleaning sticky, chewed chewing gum off the bottom of bleacher seats.
► We see and hear a couple of hard tackles during a football game.

MESSAGE - Family is more important than popularity and fame. 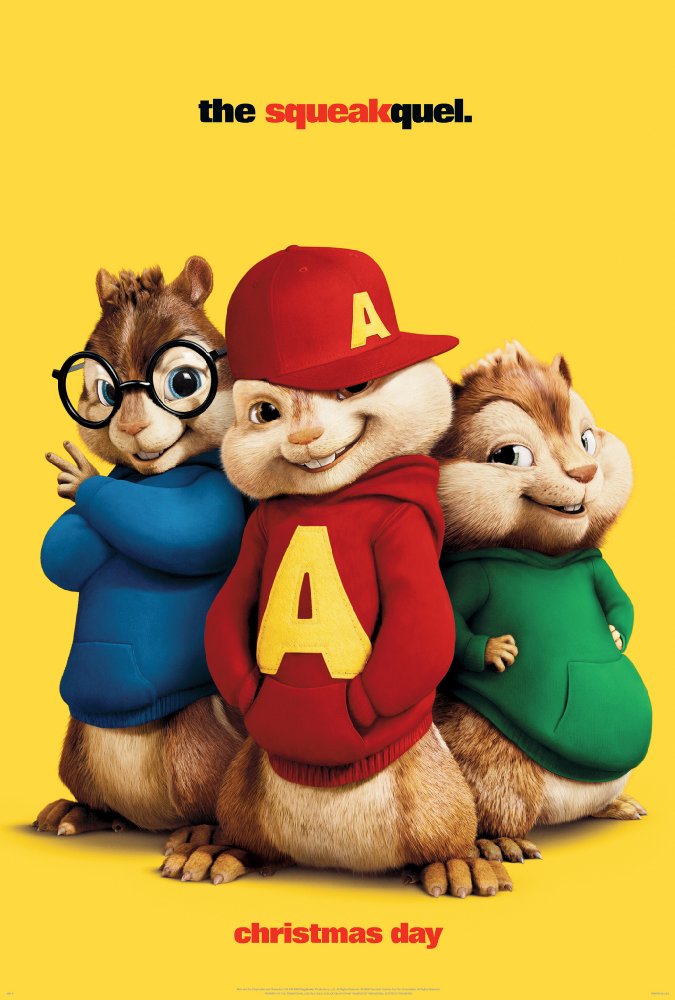