An overworked and underpaid bounty hunter (Ice Cube) dreams of opening his own PI firm and all he needs is money. When the con man (Mike Epps) he's chasing for the third time stumbles onto a diamond smuggling operation, they both see the pot at the end of their respective rainbows. Also with Tommy Flanagan, Anthony Michael Hall and Eva Mendes. [1:34]

SEX/NUDITY 4 - A man says he has "business to attend to" and goes into a room with a woman; we hear moaning and heavy breathing and see her moving up and down against a wall with a man in front of her. A woman kisses a man, a man and woman kiss a few times, a man and woman kiss passionately, a man kisses a woman on the face while they are handcuffed to a bed, and a man kisses a woman on the neck. A man and woman dance around a room together. Many women are shown in bikinis and thongs, in halter-tops, shorts and miniskirts that reveal cleavage, the side of their breasts, bare abdomens, thighs, bare backs and shoulders. A model is shown wearing fishnet stockings and a leotard-type top that exposes her thighs, part of her buttocks and cleavage. Two elderly women look at condoms in a store and talk about why they need them.

VIOLENCE/GORE 7 - A man shoots three people, and a woman shoots a man in the neck; blood spurts from the wounds and we see blood on their clothing. A woman is shot in the head and a man is shot in the chest. A man is tasered and then shot repeatedly (we see his blood-covered shirt as he falls to the ground). A man is shot in the arm at close range, blood splatters and he screams and we see his blood-covered arm and shirt sleeve. A man with a metal splint on, and screws through, his arm is tortured as two men tighten the screws; the man screams in agony and we see some bloody tissue on his arm. A dead woman floats up from under a layer of bubbles in a bathtub; she has a bruised neck and what looks like a belt wrapped around her neck. A man on a rooftop is shot, blood splatters on a wall next to him and he falls to the ground. A man bursts into a man's house with his gun drawn and threatens a man, but a woman comes out of the back room blasting with a shotgun. A man jumps through a window while a woman with a shotgun chases him, and the man hits her hard in the face and she falls to the ground. A woman shoots at a man from a distance. During another shootout a man is shot at by a man and woman who are driving away while he's shooting back. Two men fight, and one has his head shoved through a car window and is tasered in the crotch repeatedly. We see blood-streaked ground and stairs, and watch bodies covered with body bags being taken away from a crime scene. A man is hit by a car and he's thrown in the air. Two men fight with punches, kicks and shoving while in an unmanned, speeding boat; when the boat hits a sandbar one man is thrown and knocked out. Two cars drive recklessly through streets; one has its back window shot out and the other is fired on with a grenade launcher; the grenade flies past the car and hits a truck filled with fish and debris is sprayed all over. A man is hit on the head with a golf club and is knocked out, a man is hit on the head with a vase (it shatters) and is knocked out, twice. A man hits a woman in the face and she falls to the ground. Two men are shoved off a boat and into the water. A man jumps on and tackles another man to the ground. Two men are taped up and shoved into the trunk of a car. A man punches a glass wall hanging and the glass shatters. A man chases a man into an alley; one man sprays the other with steam from a hose. A man steals a motorized scooter and rides it into a busy street, runs into a car, jumps over the car, jumps over a fence, and climbs a ladder onto a roof. A man throws stones at another man. Two men shove each other, one is held in a chokehold, one bites the other's nipple and one pulls a gun on the other. A man who is handcuffed with his hands behind his back jumps from an elevated boat onto another boat and lands hard on his back. A car is driven into a boat showroom and crashes through a glass display case, and a car drives through a glass divider. A man threatens a boy with a gun, a man threatens two elderly women and they threaten him, and a woman is held by the throat and a gun is pointed at her chin. There are several scenes showing people yelling abusively at each other (usually employer to employee). A man has two jagged scars on his cheeks. We see a dead fish in a plastic bag, and a dog is forced into a starting gate at a racetrack. A man spits on the ground.

SUBSTANCE USE - A couple of people are shown smoking cigarettes.

MESSAGE - Everyone is motivated by money. 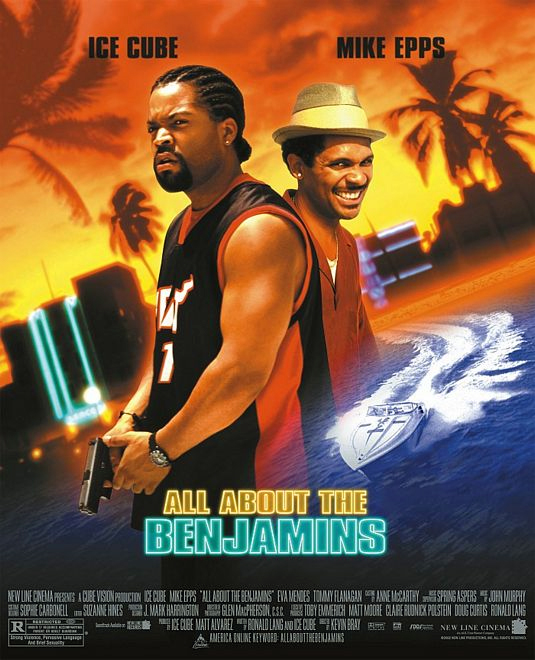