Why is “All the Old Knives” rated R? The MPAA rating has been assigned for “sexuality/nudity, violence and language.” The Kids-In-Mind.com evaluation includes a couple of sex scenes including partial nudity, a few kissing scenes, many scenes of a terrorist plane hijacking and the ensuing death of everyone on board the plane, discussions of hijacking and international relations, and 15 F-words and other strong language. Read our parents’ guide below for details on sexual content, violence & strong language. A veteran CIA agent’s (Chris Pine) assignment is to get in touch with his former lover (Thandiwe Newton), who was also an agent but resigned after the agency failed to prevent a hijacking, and is suspected of having been a mole, working for Iran. Also with Laurence Fishburne, Jonathan Pryce, Ahd, Jonjo O’Neill, Abdul Alshareef, David Dawson, David Bedella, Oscar Coleman, Cali Gayle and Joshua Lacey. Directed by Janus Metz. Several lines of dialogue are spoken in Russian, German and Farsi with English subtitles. [Running Time: 1:41]

All the Old Knives SEX/NUDITY 7

– A man flashes back to having sex with a woman in a couple of scenes and we see them each thrusting on top of the other while moaning (we see the woman’s bare breasts, legs and abdomen and the man’s bare chest, abdomen, back and buttocks). A man and woman lie in bed together and he is shown shirtless (we see his bare chest, abdomen) and she wears a large shirt that hangs open (we see her bare breasts, abdomen to the hip and legs to the hips) and the man caresses her breast. A man and woman lie in bed together partially covered by sheets; the woman caresses the man’s face and they kiss (we see her bare shoulders and cleavage and his bare shoulders and partial chest).
► A man and a woman kiss tenderly in a few scenes. A woman kisses a man’s hands and he asks her to move in with him; she accepts. A man and a woman lie nude in bed holding each other and we see his bare back and her bare breasts and abdomen; the man showers and we see his bare back and buttocks, and the woman gets out of bed and pulls on her underwear (we see her bare back, buttocks and legs).
► A man and a woman feed each other bites of their food across a table in a restaurant. A man and woman toast “To old lovers.”
► A woman wears a shirt off the shoulder and we see her bare shoulder and breast. A woman wears a low-cut dress that reveals cleavage in several scenes.

All the Old Knives VIOLENCE/GORE 5

– Several scenes show the panic and terror of the passengers of a plane being hijacked and we see a flight attendant shot and killed (blood pours from the wound as her body is carried through the aisle); passengers scream as we see young children being led away from their families and we are told that they are being used as human shields. A man is shown dead, seated in a chair and holding a gun with a bloody wound in his head (implied to be a suicide). A man is shot in the head and pushed out the hatch of a plane on a tarmac (we do not see blood but we hear a thud). A man’s nose bleeds and his vision goes blurry; he takes a few short breaths and lays his head on a table, dying.
► A man talks about having to give up one of his sources and we see the man’s shop in disarray after he was apparently taken away; the man later talks about his child having to watch him being beaten and that the child later died at 6 years old.
► A woman leads another woman through a dark building, she takes her phone and leaves her in a room where she is approached by a man and she asks him for information. A man talks about Russians torturing him and breaking his leg. A woman talks about having nightmares that she was a hostage on a plane and that her children were taken away from her; a sequence from the nightmare shows her being struck by a hijacker and held at gunpoint (we see her with a swollen lip). People strategize about how to end a hostage situation. A man says everyone is dead on a hijacked plane and they talk about sarin gas having been used. We hear reports of hostages in a hijacking being killed. People discuss about a mole in a security organization. A man says that a suspected terrorist died before they could get a name from him (implying torture). A woman says that her parents died in a car accident. A woman is described as having grown up in a war zone. A man is described to have scars from skirmishes in war. People talk about gas being pumped into a crowded theater and that everyone was killed. People talk about NATO security forces and Chechen extremists in several scenes. We hear several news reports of a hijacked plane. A woman talks about suspecting someone of selling secrets. A remark is made about a terrorist attack where everyone was burned alive. A woman talks about a man’s wife having a “passive-aggressive illness.” We see photos of a man with scars on his face. A man accuses another man saying, “You would destroy my life to save your own.”
► A woman vomits in a toilet (we hear splatter and gagging; we see no goo).

All the Old Knives LANGUAGE 6

All the Old Knives SUBSTANCE USE

All the Old Knives DISCUSSION TOPICS

All the Old Knives MESSAGE

– Spying is full of duplicity and lies, and people can do awful things for love. 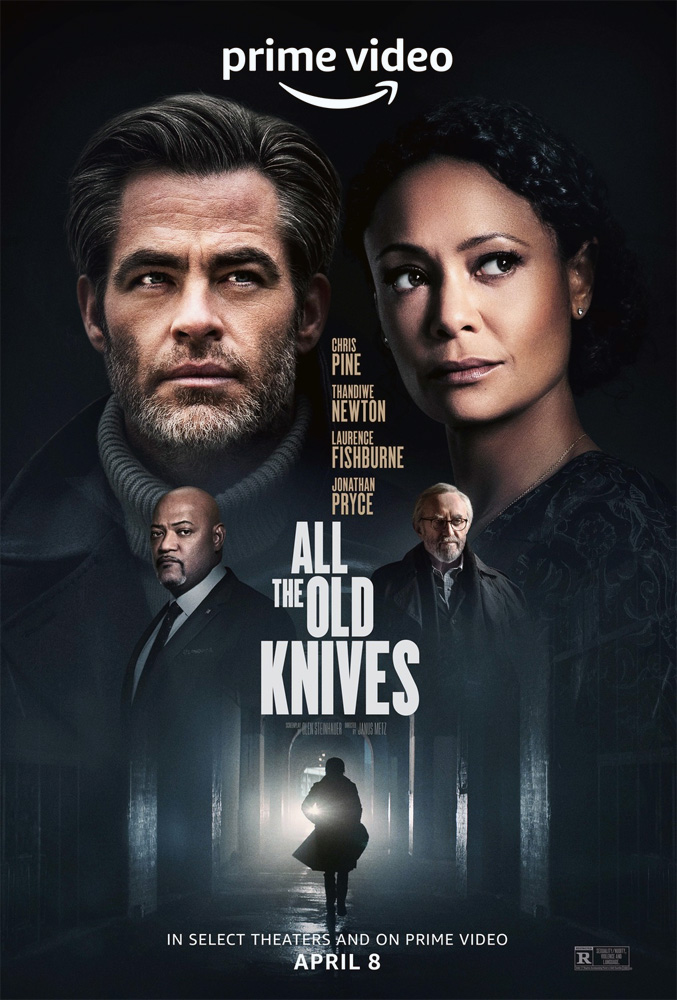