A preteen boy (Ed Oxenbould) struggles through many bad days, including a big one that goes downhill after gum is stuck in his hair overnight. He looks to his family for encouragement, but they ignore his tribulations, recite aphorisms and smile, and he wishes they could feel his anguish; soon, his mom (Jennifer Garner), dad (Steve Carell), brother (Dylan Minnette) and sister (Kerris Dorsey) all have a horribly bad day. Also with Bella Thorne, Jennifer Coolidge, Dick Van Dyke, and Megan Mullally. Directed by Miguel Arteta. [1:21]

SEX/NUDITY 3 - At a preteen party, three heavily muscled men wearing sleeveless shirts, jeans and boots dance as the entertainment act and begin to remove their shirts in a strip tease; a father shouts, "No! PG-13! Please!" while preteen girls stare with open mouth at the dancers and the lead dancer gives the thumbs up to the father and the dancers refrain from sexy dancing. Some teen girls wear tops with thin straps that reveal a little cleavage. A teen girl wears different shorts in three scenes that bare most of her legs to the thigh. An exercise class includes women wearing stretchy, snug tights and sleeveless tops that reveal body curves, as well as a little cleavage. At a preteen boy's mother's office, we see a slide on a screen depicting him as a baby, sitting on a potty chair. An 11-year-old boy walks to his room wearing only a long towel from waist to floor and we see his bare chest. We see a cell phone picture of a preteen boy with red chickenpox covering his face and bare shoulders, arms, chest and abdomen (we see the navel).
► A husband and his wife hold hands at a play and later kiss briefly.
► A preteen boy invites a preteen girl several times to his birthday party and she refuses, but finally does attend. A preteen boy looks at a preteen girl, does not look where he is going, and falls over a sprinkler head in his yard. At night in a bedroom a teen boy talks to a girl on a cell phone, mentioning "that cute little butt of yours" and "I love you" (please see the Violence/Gore category for more details).
► A mother walks into the bathroom where her teen son stands nude (we see only his shoulders and head); they both scream and she slams the door as she rushes out and in the family van later, she says that she has seen every penis in the car (presumably, of her two sons and husband). A teen boy says, "I'm dating the hottest girl in school" and his preteen brother later tells his family that the teen waited a whole year to make out with a girl in the back of the family van.
► A preteen boy's facial image is taken on a cell phone and appears atop clothed women models' bodies (blouse, short-shorts and hose, a short dress showing bared legs to the lower thighs and some cleavage) and is texted to other students' phones; one boy says to the photographed boy, "Nice boobs!"

SUBSTANCE USE - A teen girl with a cold says the school nurse offered her baby aspirin and that she wants drugs, a teen girl swallows several doses of cough syrup in a drug store (despite her father telling her not to do so), a teen girl drinks half a bottle of cough syrup at school and begins to giggle and make funny mouth noises (please see the Violence/Gore category for more details) and her father tells her that she cannot play around with medicine, a teen girl's mother tells her not to drink a bottle of cough syrup before going on stage if she ever performs on Broadway, and a boy talks about two other boys who are patients of a psychopharmacologist because they have ADHD (prescriptions implied, but we see now drugs). Four men drink cups of Saki at a restaurant and one man chugs a full glass of what looks like beer as the other men clap their hands. We hear that a boy is having an Energy Drink Bar at his birthday party (we do not see it), a mother asks her 13-year-old daughter at breakfast why she is suddenly drinking coffee and the girl says that "I'm not a morning person."

MESSAGE - Family will get you through a bad day. 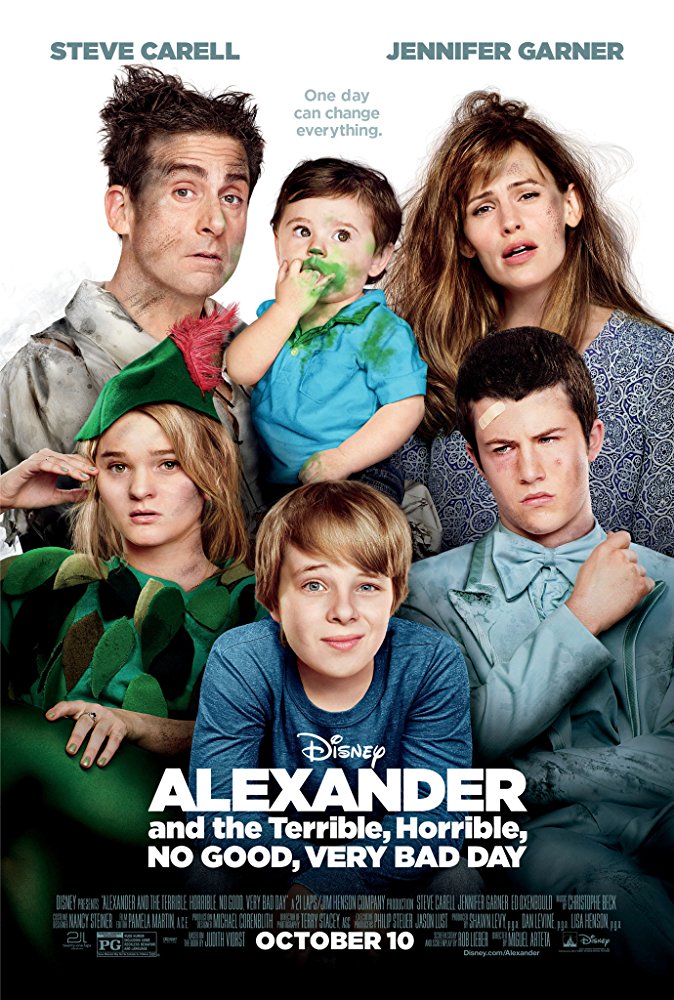