Based on true events: Two experienced sailors (Shailene Woodley and Sam Claflin) journey into the Pacific Ocean in 1983, sailing into a Category 4 hurricane that knocks both of them unconscious. One sailor awakens to find her partner badly injured and desperately looks for help for 41 long days. Also with Jeffrey Thomas and Elizabeth Hawthorne. Directed by Baltasar Kormákur. [2:00]

SEX/NUDITY 5 - A woman facing away from the camera sits cross-legged and nude, meditating on the deck of a sailboat (we see her bare back, buttocks and thighs, as well as the side of one breast); she lies back when it rains and from an angled aerial view, we see her breasts and abdomen (the genital area is unclear). A woman seems to not be wearing underwear under skimpy tops and short-shorts in dozens of scenes; her nipples are clearly outlined and her breasts jiggle in brightly colored knit tank tops that have narrow straps and necklines that reveal cleavage while the shorts bare her legs to the tops of the thighs and one scene shows the bottom of her bare buttocks. A woman wears a clingy below-the-knee dress that reveals cleavage and nipple outlines in her halter top, along with the bare sides of both breasts. A woman wears a one-piece swimsuit that shows cleavage, bare side breasts, skin in side cutouts, a partially bare back and legs bared to the hip. A woman wears a tight bikini that reveals pushed-up cleavage with bare abdomen, back and legs. A swimming scene shows a woman wearing a string bikini that reveals full back and front nudity except for the pubic area and a few inches covering the nipples. A woman lies on a bed in a darkened room with her bare buttocks toward the camera and one bare thigh close to the lens. A woman wears a T-shirt and bikini bottoms as she talks to her fiancé on a sailboat and he wears mid-thigh shorts. We see a close-up of the back of a woman's clothed buttocks and bare thighs and legs in short-shorts, and the lower thighs and legs of her boyfriend as they climb a hill. One scene features two sailboats full of shirtless men (we see bare chests, abdomens, shoulders and backs) accompanied by women wearing tank tops and short-shorts (we see the women's legs to the tops of the thighs, along with some cleavage). A couple of scenes include women wearing V-neck loose dresses that reveal a little cleavage.
► A man and a woman kiss passionately for several seconds in two scenes. A man and a woman kiss briefly. A man and a woman hug. A woman laughs and kiss her boyfriend while underwater.
► A man and a woman stand in the doorway to a bedroom where we can see a large bed as he grabs the waistline of her trousers and the scene ends (it is unclear whether sex occurs). A man kisses a woman on the forehead twice. A woman feeds a man peanut butter slowly off her fingers (it may appear sensual to some viewers).
► A man tells a woman he loves her, proposes marriage, and she accepts. A man tells a woman, "You're like a bloke" and she replies, "You're like a woman." A woman says that her mother was only 15 when she gave birth to her.

VIOLENCE/GORE 5 - A woman checks a man's bandaged leg and removes bloody gauze; she pours in disinfectant as the man winces and grunts in pain. A woman checks a man's injured leg and turns away; we see only her face and then bloody bandages as the camera shows her wrapping a layer of cloth over the leg. A woman looks in a mirror and sews a cut in her forehead with a needle and black thread in close-up, grunting in pain several times. A man and a woman on a wrecked sailboat become sunburned on the face and neck and we see large red scrapes on the woman's arms, wrists, thigh and upper chest. A woman's hand bleeds and then we see dirty bandages covering both hands. A woman on a wrecked sailboat sees her fiancé adrift as he clings to a capsized row boat; she swims out, brings him back and gasps for air as she hauls him onto the sailboat (we see his lower ribcage and stomach bruised purple and his right lower leg is cut and bleeding and he later says that he has broken ribs and a shattered leg and the woman splints the leg and wraps it in bandages).
► A series of flashbacks show a man and a woman sailing a boat and tightening riggings as they hear that a storm is coming and a large dark cloud fills the background and lighting bolts flash; a category 4 hurricane strikes, buffeting the sailboat as the man and woman scream and shout several times, their boat clashes with a series of waves and a large wave makes the metal of the boat creak and we hear a loud bang as the man is swept overboard and the woman climbs down into the hold of the boat where she falls and is knocked unconscious as water begins to fill the boat.
► A woman awakens in about two feet of water inside a sailboat and shouts for her fiancé, and then screams "No!" for several seconds; she cries when she cannot find him and her hands shake as she holds binoculars, she calls for rescue on the ship's radio but there is no response, a junction box shocks her with a spark and she jumps as she yells and later, another device delivers a shock and she jumps. Two scenes show a man wearing a slicker and trousers as he floats downward underneath the surface of the ocean with a homing beacon flashing on his shoulder; his eyes are closed and he may be unconscious.
► A man says that he is a burden to his fiancée, and then rolls overboard. A woman shouts twice, "We're gonna die out here!" A man and a woman argue briefly several times. A long-time sailboat owner says he often experiences seasickness, sunburn, and hallucinations. A man says his mother hanged herself when he was seven years old. A woman enters a sailboat and cries when she sees pictures.
► A man develops a fever and trembles a few times. A woman alone on a wrecked sailboat pumps dirty water out of the boat and vomits over the side (we only hear her wretch and do not see vomit). A woman tries three times before she can right a fallen mast on her boat, grunting and later swims under the boat to free the rudder from a piece of a sail. A man cuts up and cleans a large fish as we see some blood. A woman tries to spear a fish underwater and gives up. A woman spears a fish and the camera cuts to the fish flopping on the deck of her boat; we then see her eating pieces of raw fish.
► Adrift in a sailboat at night, a woman fires three flares at a sea liner (they are not seen). A woman adrift in a wrecked sailboat fires three flares during the daytime and a commercial boat tows her to land.
► A woman jumps into a lake and holds her breath to scare her boyfriend, who jumps in and finds her; she laughs and they kiss underwater.

SUBSTANCE USE - A woman smokes a marijuana cigarette in close-up at home. Two men and two women on a yacht drink champagne, a man and a woman drink wine in a couple of restaurant scenes, a woman finds five bottles of beer and a box of cigars on a wrecked boat and she shares a bottle of beer with a man while holding half a cigar between her fingers, and a woman says that she drank 10 shots of alcohol with her mother in a bar on her 16th birthday. A man takes a puff from a cigarette in the background at a table in a restaurant, and a man holds a lit cigarette on a yacht.

MESSAGE - People who have reserves of courage and determination can survive mostly on peanut butter while adrift at sea for 41 days after a hurricane. 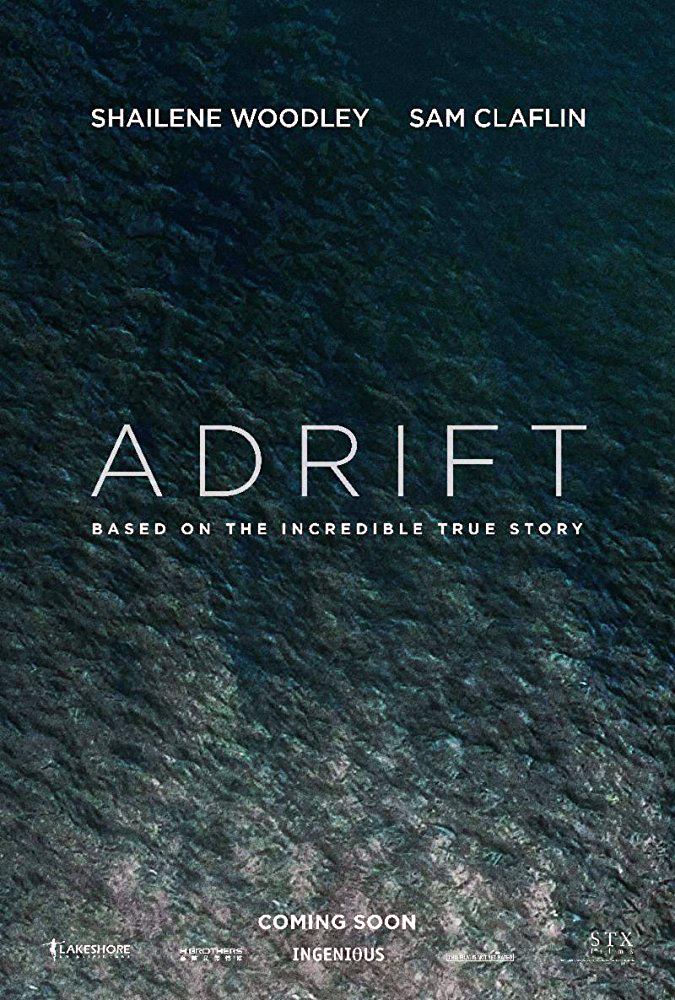