Why is “Zeros and Ones” rated R? The MPAA rating has been assigned for “language, some violence, bloody images, sexual material and drug content.” The Kids-In-Mind.com evaluation includes a forced sex scene between a man and a woman with partial nudity, a sex scene between two women with partial nudity and a few kissing scenes, a couple of torture scenes with drugging and water-boarding, several dead bodies with bloody wounds shown, arguments, and 12 F-words and other strong language. Read our parents’ guide below for details on sexual content, violence & strong language. An American soldier, or perhaps he’s a videographer (Ethan Hawke), is on some sort of assignment in locked-down Rome, perhaps to thwart a terrorist attack on the Vatican, while trying to uncover the whereabouts of his brother (also Hawke), an anarchist, or perhaps a communist or a terrorist sought by the authorities, or perhaps other factions. Also with Valerio Mastandrea, Cristina Chiriac, Babak Karimi, Salvatore Ruocco, Dounia Sichov and Phil Neilson. Directed by Abel Ferrara. Several lines of dialogue are spoken in Russian with English subtitles and several others are spoken without translation. [Running Time: 1:25]

Zeros and Ones SEX/NUDITY 6

– A woman holding a gun on a man in a hotel room tells him that he is to “knock up” a woman that is undressing (we see her wearing a camisole-bodysuit that reveals cleavage and bare legs to the hips) and they will let him go; a camera is trained on the two as they lie on a bed and the woman helps the man take off his shirt (we see his bare chest, abdomen, back and part of his buttock cleavage); they kiss and lie on the bed and sex is implied.
► A painting shows a fully nude man with his bare chest, abdomen, legs and genitals visible. A couple of paintings show a shirtless Jesus (we see his bare chest and abdomen). A woman wears a low-cut T-shirt that reveals cleavage. A woman wears a low-cut dress that reveals her bare shoulders and back. A statue of a nude male is seen in a background scene and bare chest, abdomen and legs are shown. Two women wearing thong underwear and bras kiss and caress each other in a few scenes (we see bare buttocks, cleavage, abdomens and legs); one scene is on video and others are in person, and one scene shows them wearing the same skimpy clothing but they are dead (please see the Violence/Gore category for more details). A man and a woman wearing masks kiss and embrace.
► A woman tells a sexually suggestive joke at a dinner.

Zeros and Ones VIOLENCE/GORE 6

– Armed men shoot and enter a building, a man is punched in the throat and falls and another man is held and we see him being water-boarded with a bucket of waste water, and he gags and gasps between each session. A man with a gun walks through a building where he finds several people dead with bloody wounds and blood splatter on their bodies and surroundings (one woman has a bloody gunshot wound in her head).
► Armed men search a homeless man’s shelter and the homeless man ignites an explosive vest that blows him and the surrounding area up (we just see flames). There are three explosions (we see a flash of light and flames and hear rumbles).
► A man is injected with a drug and he slides down a wall to the floor; he seems affected by the drug and begins ranting when asked questions. A woman holds a gun on a man and makes him drop his weapon, which he does. A man holds a gun to another man’s head. A man holds a gun on a woman. Two men spar with boxing gloves. Armed soldiers stand in a train station as a man walks through. Military vehicles unload many armed soldiers that run through an area. A man on a computer screen yells for a man to get out and that people are coming for him as armed people break into his apartment and shoot the computer; he runs away and is picked up by a man on a motorcycle.
► A man yells, “How come no one is setting themselves on fire?” A man tells another man, “Your brother is dead,” and, “We are negotiating for his body.” A man and a woman talk about another man that is in prison and they are not sure if he is still alive; the man says he won’t last on the street knowing what he knows. A man says, “Death to the infidels.” A man says, “Jesus was just another war casualty.” A man is accused of “convening with the enemy,” and he is told that it is punishable by death. We hear that a man’s friend was killed.
► We see a scene of the rubble of a building and surrounding area. Many scenes show grainy video of activity that is hard to make out. Set during the COVID-19 pandemic, people are shown disinfecting public areas, a man uses hand sanitizer in several scenes and people wear masks in most scenes.


Zeros and Ones LANGUAGE 6

Zeros and Ones SUBSTANCE USE

– A video shows a man holding a vial of a drug that is then injected into another man’s arm (please see the Violence/Gore category for more details), a man hands another man a small packet of a drug and he opens it and tastes it, and a woman weighs a white powder and a man pays for some that she wraps in a piece of paper. People drink glasses of vodka at dinner, and people on video drink champagne. A man on a computer screen smokes.

Zeros and Ones DISCUSSION TOPICS

Zeros and Ones MESSAGE

– It is entirely possible to write, film and market a movie that makes absolutely no sense and still find an audience and critics who will like it. 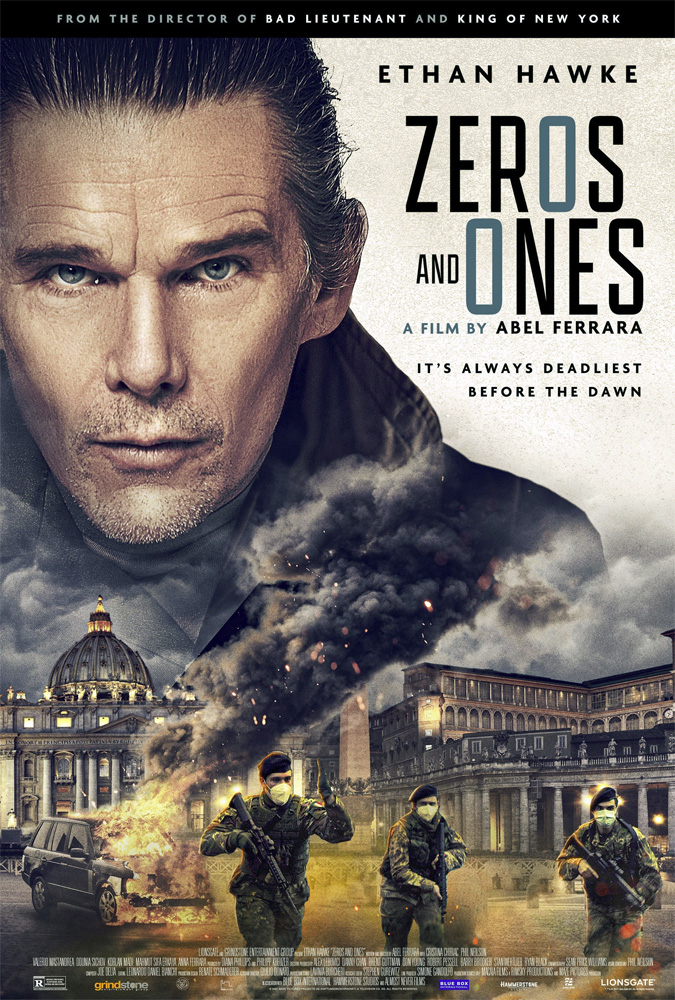