Based on the eponymous novel: In order to win the girl of his dreams (Portia Doubleday) a wimpy teenager (Michael Cera) assumes the alter ego of Francois, a bad boy who breaks all the rules. Also with M. Emmett Walsh, Mary Kay Place, Steve Buscemi, Ray Liotta, Fred Willard, Justin Long and Jean Smart. Directed by Miguel Arteta. [1:30]

VIOLENCE/GORE 5 - A man is seen whipping a young man on the behind; the young man seems unaffected and emotionless and he sarcastically asks the man if that is all he has to offer; the man continues to whip the young man's behind.
► A young man storms through the bedroom door of a young woman to find a young woman and a young man in bed together: one young man lunges toward the other young man and they punch and wrestle each other until the police arrives and one young man is led out in handcuffs. The alter-ego of a young man berates the young man, mocking him until the young man punches the alter-ego in the face, knocking him back; the young man storms away, only to be found curled up in the fetal position by the alter-ego, who kicks him in the stomach.
► A young man and a man shout at one another and as the young man lunges towards the man, the man doubles back and punches the young man in the face; the young man punches the man, runs out the door and locks himself in a stolen car, the man follows, punches and kicks the car, and the young man drives away. After walking into a room to find an intoxicated man face-down on the floor, an intoxicated man sitting on a sofa with a woman's feet in his lap, and an intoxicated young man sitting on a chair staring into the distance, a man begins to shout and he is punched in the face and sent reeling backwards.
► A young man drives erratically and cuts in and out of traffic, a trailer attached to the back of his car becomes detached, rolls down a hill, causes two cars to crash into one another, crashes into the patio of a restaurant (patrons leap to get out of harm's way), and two gas tanks in the backseat of the car explode; the young man stands at the top of a hill, panics and runs away as a building, the trailer and the car are engulfed in flames. A young man sends a car careening over the edge of a small cliff and into a body of water as police officers watch and chase him. A young man spray paints a trailer, snips a woman's bras in two, and places a woman's jewelry in the toilet and flushes.
► A man violently pushes a young man against a wall while shouting at him. A discussion escalates into a man shouting at a young man, who angrily asks if the man is going to shoot him with his gun, flips over his cereal bowl and walks out of the room as a woman holds the man and restrains him from chasing after the young man.
► A man shouts at a young man. A man and a woman have a loud verbal fight. A man shouts at a young man saying that he had caused a five million dollar fire; the young man shouts back that he was not involved. A young man shouts at a young woman and storms away. A woman shouts that the closets in a trailer are full of mouse droppings. The alter ego of a young man angrily grabs the young man by the shirt and shakes him, shouting and using crude language.
► A young man states that an older man had been arrested for protesting and is known to smuggle and stash illegal immigrants in his basement. A young man tells three angry men to be "physical" with the man who angered them. A young man states that the most exciting moment in his life had been when he had imagined that a man was going to be "beaten senseless" by three sailors. A young man looks angrily at the other young man and tells him to drop dead. A young man tells a young woman that he had stolen a car and burnt down half of a city in order to win her love. A man tells a young man that he is lucky because he is going to resist the urge to strangle him. An inebriated man tells a young man that a young woman had been an arsonist in a previous life. A woman remarks to a young man, "Live or die, we don't care." A young man comments that his last name is a curse that set him up to be "an evil nurse."
► A man tells a young man that the man a woman was involved with had suffered from a heart attack and died and that his body is being shipped back to his wife; a woman sobs at the news. A young man finds a woman weeping.
► After chewing on his fingernails, a man spits on the floor. The sounds of retching are heard, followed by a young woman emerging from a bathroom stall.
► As the credits roll, a cartoon is shown depicting a young man and his alter ego snubbing a cigarette out on the forehead of a man. A man accidentally sprays a young man in the face with a hose.

SUBSTANCE USE - A man holds a joint, inhales, hands the joint to a young man who acts like he's inhaling and then hands it back remarking, "Good stuff," three people are intoxicated as a young man walks into a room, is instructed to eat two "magic mushrooms," he consumes two, his alter ego shows up and swallows a handful of the mushrooms saying, "Have fun" and walks away, an older man and a woman stare into the distance (they had been given "magic mushrooms") and a young woman tearfully tells a young man that her brother had "drugged everybody." A cartoon version of a young man sits with a glass of wine in front of him and smokes a cigarette, a man drinks a beer and belches loudly, a man holds a wine glass while another man has a wine glass sitting in front of him, and an older man, obviously intoxicated, sits at dinner table and rubs mashed potatoes all over his face as an intoxicated older woman watches him, glassy-eyed. A woman smokes cigarettes in a few scenes, a man lights and smokes a cigarette, a record album is pictured with a man holding a lit cigar, a young man lights a cigarette, and a young man smokes a cigarette. A young man explains that he had written a note to a young woman instructing her to put sleeping pills in the drink of another young woman, causing her to fall asleep and be kicked out of school and we see the young woman placing a pill in the drink of the young woman, who is later seen sleeping on top of a textbook, and a young man tells a young woman that another young man told him that the she was unattractive, and then remarks that the young man has not been the same since he began taking steroids.

MESSAGE - When trying to find yourself, you must be willing to battle against yourself. 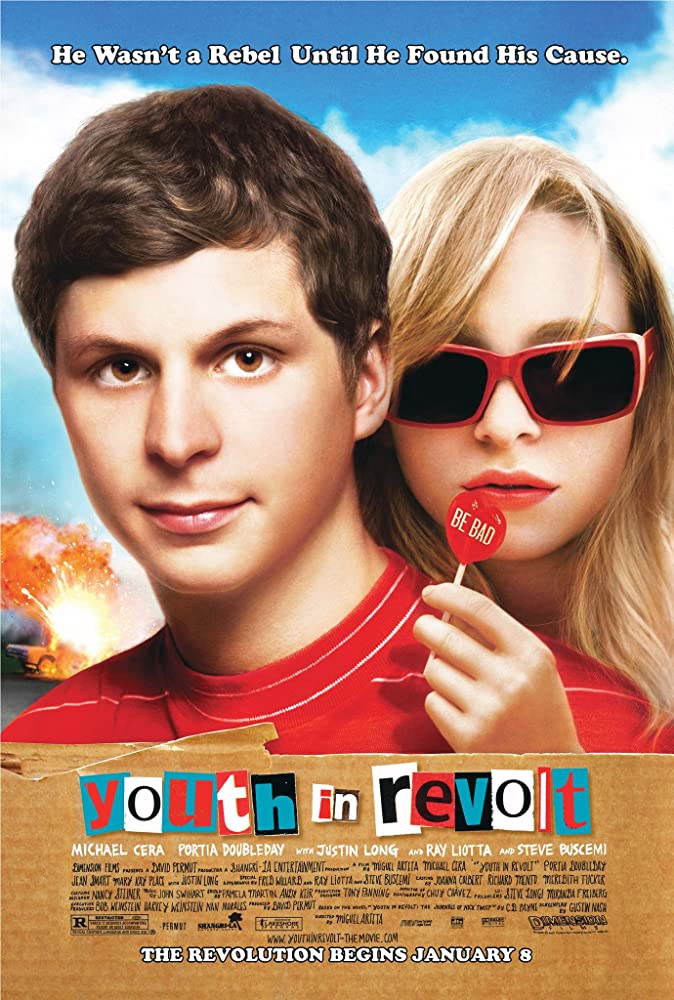