Why is “You Only Live Twice” rated PG? The MPAA PG rating does not include content details. The Kids-In-Mind.com evaluation includes several kissing scenes and implied sex scenes, several scenes of women wearing 2-piece swimsuits and other cleavage revealing outfits, men wearing revealing Sumo wrestling garb, and discussions of gender roles and the silhouettes of nude women in the opening credits; several scenes of fights and exchanging gunfire with some implied deaths, a few deaths with bloody wounds shown, a poisoning, attacks on spacecraft with one astronaut set adrift, and discussions of world domination and instigating war between two world powers; and some strong language. Read our parents’ guide below for details on sexual content, violence & strong language.” When both American and Soviet manned space capsules keep being hijacked while in space, each superpower suspects the other and a new world war is imminent. The British secret services suspect SPECTRE, probably working for another country, and send James Bond (Sean Connery) to Japan to find out who’s behind the scheme. Also with Akiko Wakabayashi, Mie Hama, Tetsurô Tanba, Teru Shimada, Karin Dor, Donald Pleasence, Bernard Lee, Lois Maxwell, Desmond Llewelyn, Charles Gray and Tsai Chin. Directed by Lewis Gilbert. A few lines of dialogue are spoken in Japanese and Russian without translation. [Running Time: 1:57]

You Only Live Twice SEX/NUDITY 4

– A woman massages a man and speaks into his ear, he turns toward her and they kiss, he lifts her up and she says, “I’m going to enjoy serving under you,” as he carries her out of the room (sex is implied). A man and a woman kiss in bed (it is implied that they have had sex); we see the man’s bare chest and abdomen and the woman’s bare shoulders before she puts on a robe that reveals her bare legs to the upper thighs. A woman wearing a low-cut dress (we see cleavage and her bare back), presses her face to a man’s cheek and neck while he is tied into a chair and she releases him, they kiss and he cuts the straps of her dress as the scene ends (sex is implied). A man and woman kiss and lie on a bed (sex is implied). A man and woman swim away from an exploding volcano and a plane drops a raft for them to use; they climb in and are lifted out of the water on the top of a submarine as they kiss and the scene ends. A man kisses a woman and asks why women of her nationality taste different.
► A man is made up to look Japanese and is told that he must marry a Japanese woman to be able to fit in; the man asks, “Is she pretty, ” and he is told, “She has the face of a pig.” A woman asks a man how “the girl” was. A woman tells a man that a password is “I love you” and asks him to repeat it to her in a flirtatious manner. A reference is made to a woman having a “healthy chest” as she stands up. A woman says of a man, “He would never touch that horrible girl.” A man is served a plate of oysters and when a woman tells him that she will not sleep with him, he pushes the plate away and says, “I won’t be needing these.” A man offers a woman to another man for a massage and describes her as being “sexiful.”
► Several women wear 2-piece outfits that reveal cleavage, bare abdomens and backs and legs to the hips while bathing and massaging two men (the men’s bare chests, abdomen and backs are seen and the two men discuss the hair on the chest and body of one of them). Opening credits are accompanied by the silhouettes of nude women and we see the outlines of their buttocks, breasts and nipples (in profile), legs and hips. A woman’s dress reveals cleavage. Sumo wrestlers are shown wearing their traditional garb as they prepare for a match (we see their bare chests, abdomens, backs, legs and partial buttocks). Several women are shown wearing 2-piece swimsuits that reveal cleavage, bare abdomens and legs and a few of the women wear long T-shirts over them. A woman stands at the side of a pool where a man soaks and she spreads her legs apart while holding a towel for him (we see her bare legs to the hips).

You Only Live Twice VIOLENCE/GORE 5


You Only Live Twice LANGUAGE 2

You Only Live Twice SUBSTANCE USE

– A woman is poisoned by drops of poison reaching her lips from a string. A glass of wine and a pack of cigarettes are shown on a table (neither is touched), a man pours two alcoholic beverages and he and another man each drink, two men drink sake, a woman pours two glasses of champagne for herself and a man, and a man drinks a shot of vodka after fighting with another man.

You Only Live Twice DISCUSSION TOPICS

You Only Live Twice MESSAGE

– British pluck and gizmos will always win the day. 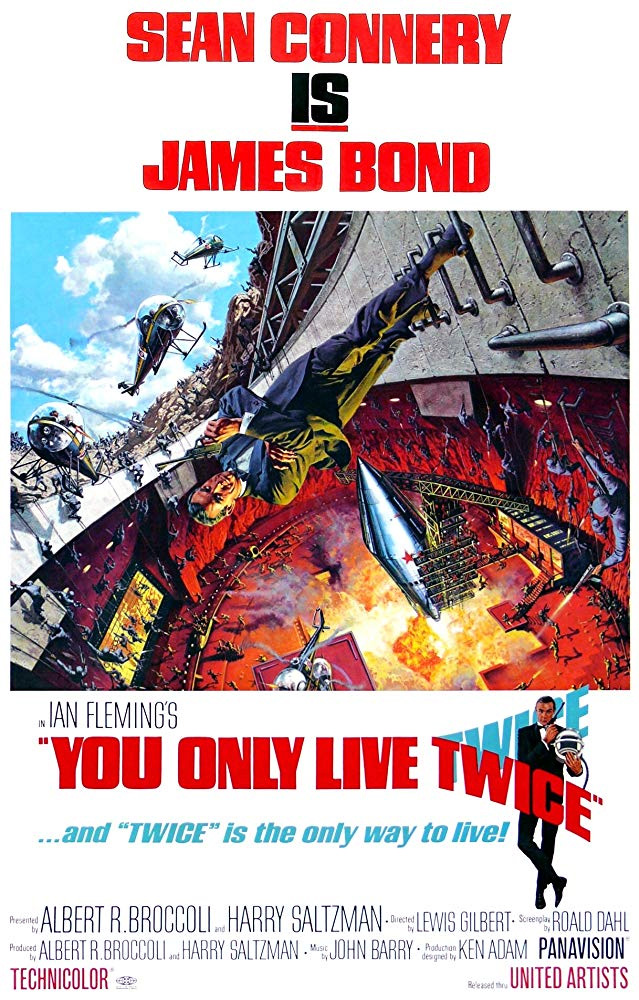