Why is “The Woman King” rated PG-13? The MPAA rating has been assigned for “sequences of strong violence, some disturbing material, thematic content, brief language and partial nudity.” The Kids-In-Mind.com evaluation includes an implied sex scene, discussions of rape, partial non-sexual nudity, several battle scenes that include stabbing and slashing as well as hand-to-hand combat leading to bloody wounds and death, a few arguments, discussions of slavery and the slave trade, and some mild language. Read our parents’ guide below for details on sexual content, violence & strong language. Set in West Africa in 1823: A commander (Viola Davis) of an elite legion of fierce, female warriors is destined to share the throne when chosen as the Woman King. As she trains new recruits, she helps lead them to fight the slave trade and protect their way of life. Also with Thuso Mbedu, Lashana Lynch, Sheila Atim, John Boyega, Hero Fiennes Tiffin, Jimmy Odukoya, Masali Baduza, Jayme Lawson, Adrienne Warren, Chioma Antoinette Umeala, Siyamthanda Makakane and Shaina West. Directed by Gina Prince-Bythewood. Several lines of dialogue are spoken in Portuguese with subtitles and others are spoken in an African language without translation. [Running Time: 2:15]

– A young woman is shown wrapped in a sheet (we see her cleavage and bare shoulders) and a young man returns to the room shirtless (we see his bare chest and abdomen and sex is implied). A young man touches a young woman’s hand and they stand close to each other.
► A woman is frozen with fear when a man removes his face covering and she has a flashback to being raped by the man, as well as others (we see movement and hear grunting). A woman says that she was raped repeatedly when taken captive when she was younger; she says that when she got away she was pregnant and hid the fact until she delivered the child and gave her up. A woman talks about her mother selling her virginity when she was 14, she says that she pleaded for her mother’s help when the first man came, and when the woman didn’t help her child by the third man, she burned him with an ember (we see a scar on her palm).
► Two young women talk about a match having been made for one of them. A young woman says that she will not have a husband that beats her. A man addresses several women as “My love” as he walks past them and touches the hand of one of the women. Women are described as “virgin soldiers.” A woman talks about having no husband and bearing no children. A woman says, “Love makes you weak.”
► A man comes out of water fully nude and we see his bare chest, abdomen, legs to the hips and his hands cover his genitals; a young woman comes out of the jungle holding his clothes and they talk before she returns his clothes to him. Shirtless men are seen in several scenes (we see their bare chest, abdomen and back). Women wear small tops that reveal cleavage and bare abdomens in several scenes. Women wear low-cut dresses that reveal cleavage and bare shoulders in several scenes.

The Woman King SUBSTANCE USE

– A woman drinks whiskey from a flask and gives a young woman a sip (she reacts to the ethanol), a woman drinks something to help her sleep after waking from a nightmare, and people drink in a drinking establishment. 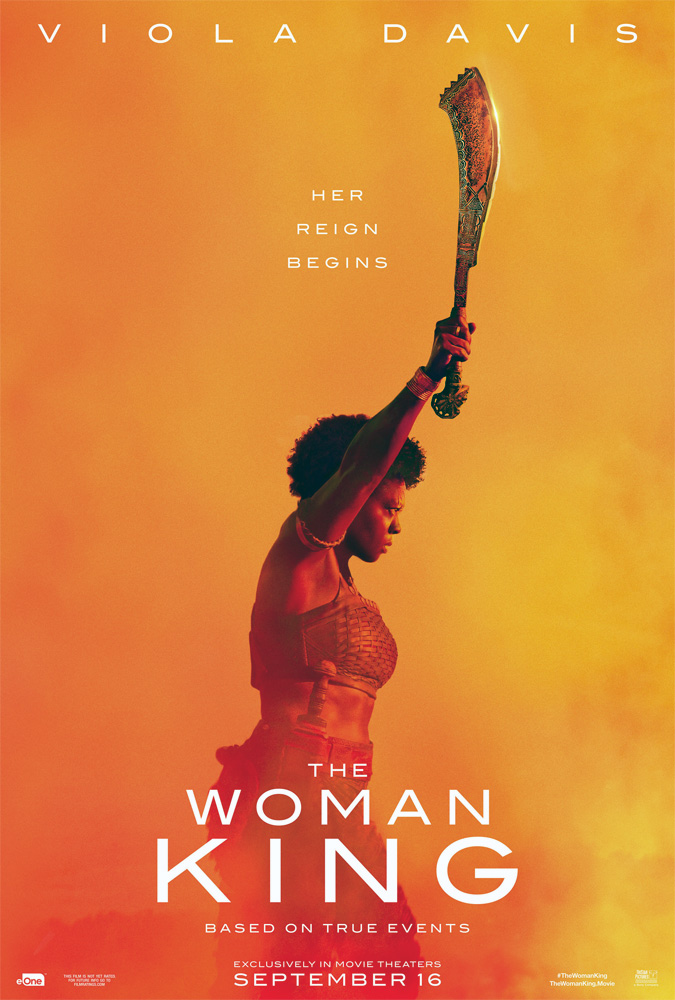