John Travolta, Tim Allen, Martin Lawrence and William H. Macy star as four middle-aged men who feel that their suburban lives in Cincinnati have become a trap and they need a change before they are too old. So, they mount their motorcycles and make their way across the country. Also with Ray Liotta, Marisa Tomei and Tichina Arnold. Directed by Walt Becker. [1:39]

SEX/NUDITY 4 - A man and a woman kiss romantically in a few scenes. A husband and wife hug and kiss in a few scenes.
► A nude male police officer (we see his bare chest) jumps in water where four men are skinny-dipping and invites them to play chicken fights or Marco Polo. Four men skinny dip and make veiled references to their genitals (we see them all bare-chested and one man's bare buttocks a couple of times); a family with children is swimming nearby and the parents panic and rush out of the water. We see pictures of women wearing skimpy outfits that reveal cleavage, bare abdomens and legs. Women wear low-cut tops that reveal cleavage throughout the movie. A man wakes up with no pants on (we see him in jockey shorts).
► A man's computer says, "searching for alternative sex" and begins opening websites for sex with grandmas, animals, etc.; the man is seated in a coffee shop where children are within earshot (the computer screen is not visible).
► A man and a woman dance together, and men and women dance together at a celebration.
► Young women in a car throw kisses at men riding motorcycles on a highway. Four men admire women in skimpy bikinis walking along a beach.
► A male police officer makes sexual advances toward four men, thinking they are gay (this happens in several scenes). A man flirts with a woman. A man touches a man's motorcycle seat and then licks his finger.
► Three men make a sexual remark about another man's wife. A man on a stage sings suggestive lyrics and dances ("Don't you wish your girlfriend was hot like me?"). Three men talk about another man's wife being "hot" and that she is a swimsuit model. A man talks about "3 hours of blowing," meaning blowing up an air mattress, but another man misconstrues his meaning. Men remark about the size of a bull's testicles.
► Three men sleep on an air mattress together (one wakes up snuggling with another) and a police officer finds them and assumes that they are gay.
► A man is very uncomfortable speaking to women, he stutters and is basically incomprehensible.

VIOLENCE/GORE 4 - Four men fight many other men with punches and kicks; one man is struck on the head with a pan, many face and stomach punches land and several people have bloody and bruised faces. A man kicks a man in the crotch, a man punches a man in the face twice, and a man slaps another man in the head.
► Two men slap a bull and run, one man gets away unharmed, but the other man is chased and thrown in the air by the bull; another man who is tries to distract the bull is also thrown (no one is seriously injured).
► A man is bound and hung from a tree like a piñata, another man rides his motorcycle toward him, grabs him (thinking that the rope would break), and they both hang from the tree and then fall to the ground.
► A man grabs a man and shoves him, and a man pours a beer over another man's head, and then throws him into another man. A man spills beer on two men and then squirts ketchup and mustard on them both. A man shoves another man into a chair and acts threateningly.
► A man rides his motorcycle into a realtor placard, and he is knocked off his motorcycle and onto the ground but he is apparently uninjured. A man rides his motorcycle into a pile of hay bales (he is uninjured). Three men ride their motorcycles into a surfboard and are knocked to the ground. A man crashes his motorcycle into a curb and a tree, and he is thrown off the motorcycle but is OK. A man falls on the ground when he steps off his motorcycle (his legs are asleep). A man is struck in the crotch by a stray baseball.
► A man drops a lit cigarette into a puddle of gasoline, the trail of liquid ignites, and a bar explodes. A man throws a flaming marshmallow into a tent that catches fire, another man tries to douse it using fuel, and the tent bursts into flames. A man throws a chair through a restaurant window and threatens to burn the building. A man accidentally breaks a glass door.
► A man steals another man's motorcycle. A man sabotages several motorcycles by cutting their fuel lines.
► A man threatens to remove a part of another man's anatomy and then eat it. Many men threaten four other men in a few scenes. Four men panic when many gang members ride into town. When they are surrounded by other men, a man says, "does anyone else have that pre-rape feeling?" and one of the aggressors says, "I do."
► A man in a dentist's chair moans when the suction tube gets stuck inside his mouth.
► A boy says, "I saw my father shot." Four men argue about whether to wear helmets or not. One character tells another character to "shut up." One character tells another character "I hate you." A woman yells at her husband in a few scenes. A woman is dismissive and insulting to her son in law. A man's ear is malformed from having been shot off by a gun and people tease him about not being able to hear on that side.
► Four men throw their cell phones into trees and one crashes into a truck's windshield as it passes by; the truck driver stops, acts in a threatening manner and the other men ride away.
► Three men are splattered with bug goo (we see goo on their protective goggles and sunglasses) as they ride motorcycles on a highway and another is struck by a crow. A vulture follows four men pushing their motorcycles on a desert highway. A man eats spicy chili and begins to sweat and cough. A man spills his coffee on his computer and it shorts out. A man eats a stick of butter and drinks gravy from a gravy dish and then becomes ill (we see him in the hospital where he is told that he had a panic attack).
► Four men urinate on the side of a road (we see a stream).
► Scorpions skitter on a road near where four men are pushing their motorcycles.

SUBSTANCE USE - People are shown drinking beer in a few bar scenes, people drink beer at a celebration, a man chugs beer from a pitcher, a woman drinks a beer, and a woman drinks wine with dinner. A man says, "I used to get high a lot."

MESSAGE - Being a responsible adult does not mean that you cannot have fun. Don't let fear control your life. 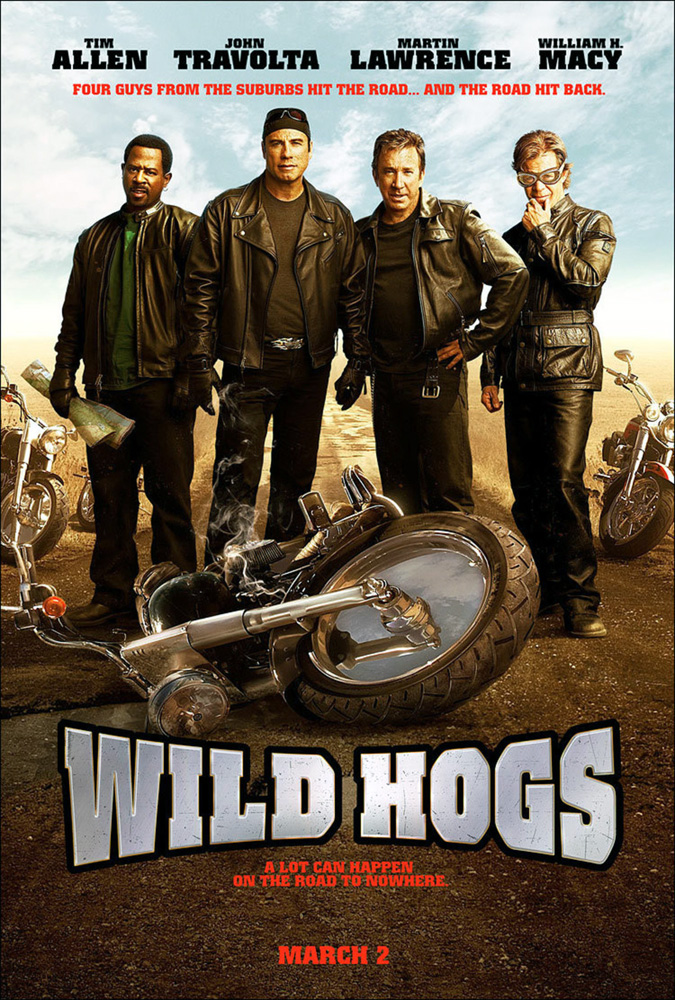