A young Scottish boy (Alex Etel) waiting for his father to return from war finds a mysterious egg on the beach. When the egg hatches a water creature that grows rapidly the boy decides that the only safe place for it is in the nearby loch. Unfortunately, it is difficult for the boy to protect the creature from men whose first reaction to fear is violence. Also with Emily Watson, Ben Chaplin, David Morrissey and Geraldine Brophy. Directed by Jay Russell. [1:51]

SEX/NUDITY 1 - A woman wears a low-cut dress that reveals cleavage.
► A man and a woman dance close together and kiss and two children interrupt them. A woman winks and signals to a man to come with her (we do not see anything else).
► A man talks about a creature being both male and female.

VIOLENCE/GORE 4 - The "water horse" creature looks like a dinosaur and has seal fins, a long neck and body and large teeth.
► A boy jumps onto the back of a creature that swims fast through the water and then jumps into the air and dives under water, and the boy clings onto the creature and gets nervous when he begins to run out of air (the creature surfaces for the boy to breathe).
► A large creature tips a ship over and the men onboard are thrown into the water; the creature snaps at one man, picks one up by the shirt, thrashes the man back and forth, and then throws the man onto the shore.
► A large gun is fired into a Loch, and a creature in the water is tossed around and thrashes from the blast.
► A large creature rises out of the water and toward a barking dog on the shore and although we do not see anything we assume the creature has eaten the dog when we no longer hear barking.
► A boy lies motionless on the shore after a near drowning, and we think he is dead, but he wakes up spitting and coughing. A boy slips and falls into the water, he thrashes trying to get to the surface and a creature grabs him and saves him.
► Two men in a fishing boat hook a creature, it pulls them across the water (like a speed boat), and they cut the line freeing themselves before they are dragged under water).
► A boy rides on the back of a creature as it swims fast through water and while they are fired on by soldiers onshore and in a boat; one blast causes the creature to tip over and the boy falls into the water (the boy is picked up by a boat).
► A creature swims fast toward the mouth of a Loch, a large metal net is raised in the air, the creature jumps and lands on the net, pulling it down along with the structures that held it up and causing explosions (we see men jumping out of the way).
► A creature lunges at a man and tries to bite his hand. A boy wades into water, other children watch him, and the boy imagines floating in the water, sinking and thrashing and trying to get to the surface (it is not clear if the boy is remembering a near drowning or imagining it).
► A dog chases a creature, the dog barks, the creatures screeches, and the dog is stopped by its lead just as it is about to catch the creature; an explosion in the kitchen then causes a pot of sauce to spill on the floor. A dog chases a creature, the creature tumbles down a flight of stairs, it screeches when it enters a room where there are many mounted animal heads on the walls, and the dog races across a dinner table spilling food and drinks on the diners.
► A boy runs to a shed where a creature has hatched out of its egg, and it screeches and runs across shelves knocking things to the floor; the boy reaches for the creature and it snaps at the boy (the boy is not harmed).
► A creature has a cut on its head that bleeds and a boy treats it with alcohol (the creature squeals from the sting).
► A creature jumps into a fountain and eats all of the fish swimming in it. A girl finds a creature swimming in the bathtub and she screams. A creature falls down flights of stairs a couple of times (it is unharmed).
► A boy finds an egg on a beach, he picks it up and peels a piece off revealing a brightly colored shell inside. A truck runs into a stone fountain and knocks breaks off a decorative piece.
► A boy sees a man slaughtering a deer with a pocketknife (we see the limp animal and a bit of blood on its body). We see a dead fish in a market being gutted by a fishmonger.
► Someone talks about a sea spirit "dragging a man to his watery death." We hear that a boy is "deathly afraid of water." A boy is frightened when a dog barks angrily at him. Two men argue and insult each other. A boy and a man yell at each other. A man threatens to kill a creature by stabbing the soft spot of its neck. A woman tells her young son that his father will not be returning from war. We hear that a man died at sea when his ship was sunk. A man talks about a wound that he suffered in the war and that he almost lost his arm. A man talks about a plan to trap German ships using a large metal net at the mouth of a loch. People talk about an imminent German invasion.
► A creature hiding in a toilet makes loud noises that resemble flatulence and a woman thinks that a man has lost control of himself.

MESSAGE - We can all learn by accepting things that are different and making rash judgments based on fear. 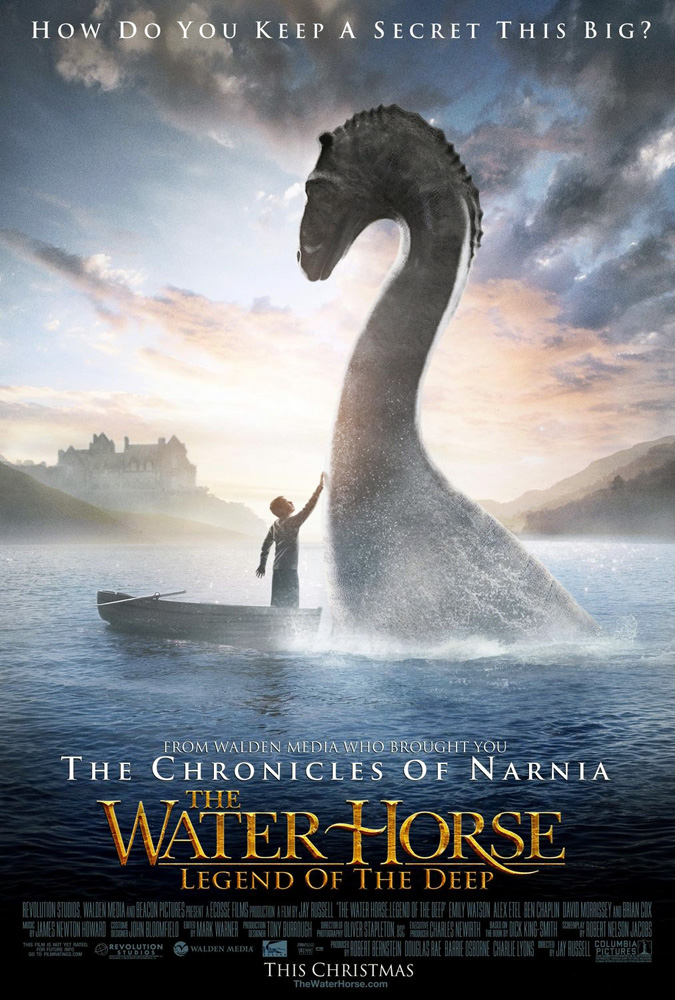