Two women (Rebecca Hall and Scarlett Johansson) take a long summer vacation together in Spain, where they meet an artist (Javier Bardem), and both fall for him, even though one has a fiancé back home. Meanwhile, the artist's ex-wife (Penelope Cruz) shows up and she seems to be insane, as well as insanely interested in her ex-husband. Also with Patricia Clarkson and Kevin Dunn. Directed by Woody Allen. [1:36]

SEX/NUDITY 6 - A man and a woman have sex on the floor behind a table: we see him lying on top of her -- only shoulders, arms and hands are showing -- as they kiss and smile.
► A man and a woman kiss briefly, they sink down, out of camera view, and the scene ends (sex is implied). A man and a woman kiss while he lies on top of her, they moan and breathe heavily (sex is implied). A husband sits in bed wearing a short sleeved shirt and shorts, and his wife stands at the foot of the bed in a loose blouse and very short shorts that reveal a small portion of the buttocks; she approaches him, and they both lie down on the bed (sex is implied).
► A man and a woman are shown in bed, he is bare-chested and she sits up and the top of both breasts and the side of one are visible.
► In a camera darkroom, two women kiss each other and caress each other's faces. In another darkroom scene, two women and a man kiss one another. Several times we see couples kissing briefly and embracing. A husband and wife kiss briefly.
► A husband and wife are shown in bed, his bare chest is visible, and he compliments her on the sex they just had (we do not see anything) by saying that she was "Really into it." A man asks two women to have sex with him at the same time; one woman says no, the other one says, "You'll have to seduce me," the first woman says that she makes love only with her fiancé, and the second woman goes to the man's room where they kiss while sitting on the bed (the scene ends and there is no further suggestion of sex). A man approaches two women and asks them both to have sex with him, one woman states that he wants only a warm body in bed and either of them will do, and he denies the accusation. A divorced woman tells another woman that she has heard her having sex with her ex-husband; the woman replies that the ex-wife may have sex with him, too, and it won't bother her. An elderly man tells his son that the son's ex-wife causes him to have erotic thoughts. A woman is told that she was seen kissing a man who was not her husband and she states that she would never leave her husband or have sex with the other man. A woman tells friends that she has had sex with a woman and regularly has sex with the woman's ex-husband and that they all live together. We hear that a woman goes through many boyfriends, having a lot of sex, and breaking up. A woman says "Love is so hard to define."
► A street scene shows 5 prostitutes (they are wearing extremely short shirts and high heels). A woman ties her knee-length shirt up around her hips and waist (the bottom of her buttocks and a bit of cleavage are visible). A man is shown bare-chested. A woman wears a semi-transparent white blouse and we see the outline of her bra and her bare abdomen. In several scenes two women wear V-necked blouses that reveal cleavage. At several parties and gatherings women wear V-necked tops and dresses that reveal cleavage.


VIOLENCE/GORE 4 - A woman enters a house with a gun, she shoots 4 times, missing a man and a woman who are there but breaking lamps; the man struggles to get the gun, it goes off and shoots the woman in the hand (we see a large splotch of blood on the hand and later see a large bandage around it).
► A woman calls a man and asks for help because she tried to overdose. A man says, "My ex-wife put a knife into me," a woman replies, "Maybe you did something to deserve it" and the scene ends. A man states, "That painter had a fiery relationship with his wife and a messy divorce," and a woman adds, "He tried to kill her or she tried to kill him." A man and a woman fight on a city street, they both shout, and she screams. A woman says that a man is a wife-beater and violent. A married woman and a single man argue about having sex. A man and two women argue about living together. A woman and a man argue a few minutes over him dating her best friend instead of her.
► A man and two women fly in a small airplane during a thunderstorm that tosses the plane; no one looks scared.
► A woman becomes nauseous as she kisses a man, and she leaves the room (we hear that she has food poisoning).

SUBSTANCE USE - A man states that his ex-wife tried to commit suicide with an overdose of drugs. Wine and champagne are shown on tables with several people drinking, many men and women carry champagne glasses and sip, in bar scenes many people drink wine or beer and a woman asks for vodka at the home of a friend (she does not receive any). A woman smokes several times, a man smokes a cigarette in three separate scenes, and cigarette smoke is apparent in a couple of bar scenes.

MESSAGE - Love and sex are complicated. Some people find monogamy to be hard. 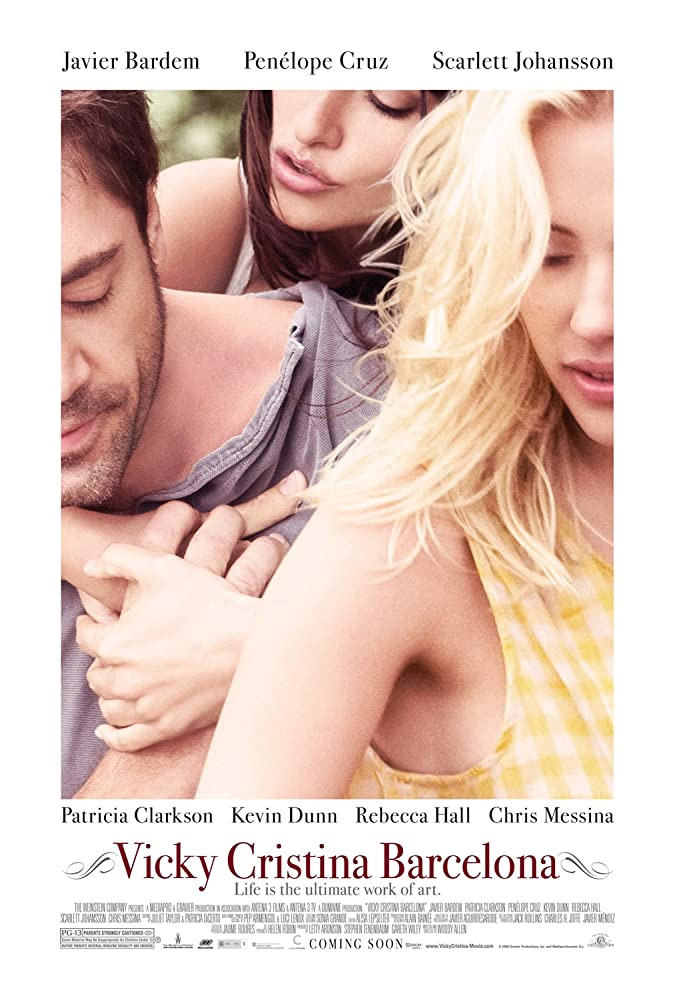