A multi-national meeting to end global terrorism, taking place in Spain, is interrupted when the U.S. president, who's in attendance, is shot. The act of terror is then replayed from the vantage point of 8 different people who were there. With Dennis Quaid, Matthew Fox, William Hurt, Forest Whitaker, Sigourney Weaver, Shelby Fenner and Edgar Ramirez. Directed by Pete Travis. [1:30]

SEX/NUDITY 1 - A man and a woman hug and kiss. A man and a woman kiss.
► A man stands at a window without a shirt and his bare shoulders and back are visible. A woman wears a low-cut dress that reveals cleavage.
► A man sees a woman (with whom he has a relationship) standing with another man and they seem to be embracing romantically.

VIOLENCE/GORE 6 - A man stands on a stage and waves to the crowd, he is shot twice in the chest (blood spurts and he falls to the floor), and we see this scene replayed several times (one time we hear the bullets strike the man). A man shoots a young woman in the chest (we see blood on her dress as she lies on the floor dead).
► A woman lies motionless in rubble after an explosion and the camera lingers on her as her colleagues realize that she is dead (she has blood on her face).
► A woman in flames runs through a plaza (someone throws a coat on her back extinguishing the flames). A man writhes in pain after an explosion (we see blood on his abdomen) and he dies from the wound.
► A man is shot in the head (we see blood on his face and head). A man shoots three men and another man is held at gunpoint. A man is shot twice and several other men are shot. A man shoots several men (we hear grunts and crunches). A man pulls a gun and is shot by another man (blood spurts and he falls back dead). A woman shoots a man (no blood is shown).
► A man is shot repeatedly (we hear gunshots and see the man lying motionless on the ground) and another man, witnessing the shooting, is in shock.
► A man is stabbed in the back, another in the throat and three more men are shot.
► A man is running and yelling and a bomb explodes throwing him through the air (we see him regain consciousness and he has blood on his face). A man is shot in the arm and another is shot through the shoulder (we see blood spurt).
► A large explosion throws many people through the air and causes the front of a stone building to collapse (we see many injured and dead people on the ground after the explosion and several have bloody wounds). We see several men unconscious from the effects of a gas.
► An ambulance swerves to miss a young girl in the street, it tips onto its side and slides along the road (we see a passenger inside with bloody head wounds and she is apparently dead) and another person is covered with blood but still alive.
► A man strikes a woman in the head using a metal pipe (she's OK) and the woman shoots him in the leg. A man grabs a woman by the hair and speaks to her in an angry tone when he sees her with another man and becomes jealous.
► A man is chased by secret service agents, he runs through crowded sidewalks, across busy streets, he is struck by a car (he rolls onto the hood and then falls to the ground), he gets up and continues running, the men chasing him shoot at him, he jumps from a balcony, lands hard on the ground, continues running and is struck by another car (he's still OK).
► A young man has a bomb strapped to his waist and we then see a building explode (we see smoke and flames and hear glass breaking).
► We see a video of a secret service agent being shot as he protects a president (he is struck twice and falls to the ground; there's no blood).
► A young girl steps into a street where traffic speeds around her and stops as a speeding ambulance approaches (she is pulled to safety).
► A car crashes into a cement overpass and we see the driver's side roof smashed flat (presumably the driver was killed).
► After a man is shot another man tackles a man running across a stage (they both fall to the floor).
► We hear an explosion and a large crowd of people scream and run away from the sound.
► A woman shows a man a video of his brother who is being held hostage and is bound and gagged (he has a bit of blood on his head and face).
► Two cars speed through crowded streets, crash together, one spins around, and they continue to speed, driving down stairs and through oncoming traffic.
► A man argues that a military strike should be conducted on a friendly nation. A man remembers being shot and seems nervous.
► An explosive device is placed on a door, which is then blown open.
► A young girl is shown wandering through rubble after an explosion, calling for her mother (they have been separated). We see many snipers posted on rooftops around a plaza where a large crowd is gathered. A large crowd of protestors yell and wave anti-American signs outside a plaza.
► A man has a scar on his back from a bullet exit wound. A young girl spills her ice cream on a man's shirt and cries.

SUBSTANCE USE - A man pours a prescription drug into his hand preparing to take it, but puts it back in the vial.

MESSAGE - Events taking place in the same place at the same time will be perceived differently by different individuals. Terrorism will never end. 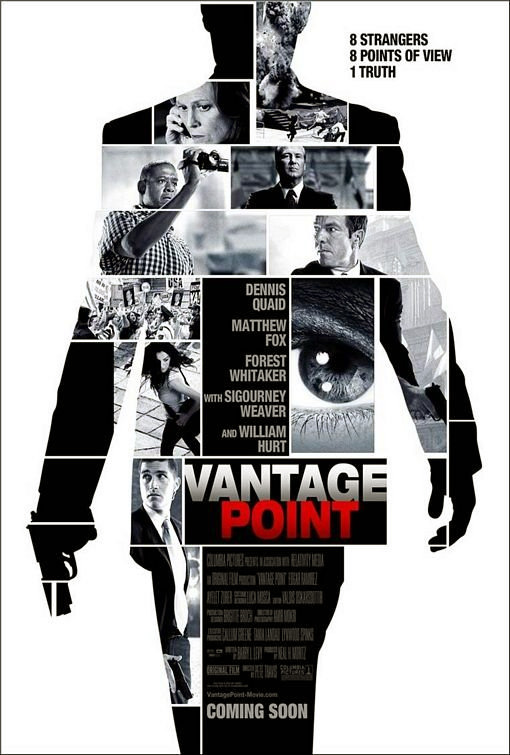