A man, saddened by the death of his wife, decides to take the adventure they had always dreamed of together. In a rather unorthodox fashion, he attaches thousands of helium balloons to the home they shared for many years and sales away to South America. He is joined by an unexpected guest who happened to be on the front porch at the time of lift off. With the voices of Edward Asner, Jordan Nagai, Paul Eiding, Christopher Plummer and John Ratzenberger. Directed by Pete Docter and Bob Peterson. [1:44]

VIOLENCE/GORE 3 - A man with a cane strikes another man in the head, the man falls to the ground and we see blood on his head). A man with a sword threatens another man with a cane, they fight, and one man spits out his dentures at the other man.
► Planes flown by dogs fire weapons at a boy dangling from a floating house (he is not struck). Planes flown by dogs crash together in mid-air (we see dogs parachuting out of the planes). A dog bites a bird's leg (the bird is unable to walk on its leg and we see blood on a bandage wrapped around it later); the dog is thrown over a ledge and into water below, and several other dogs also fall into the water. A dog barks and bites a man on the leg. A dog bites another dog, picks it up and throws it over a ledge (the injured dog whimpers but is OK later). A man and a bird climb on a ladder on the outside of a flying zeppelin and dogs flying planes shoot at them.
► Many snarling dogs chase a man and a boy (still tethered to a house), they jump over ledges and through rocks, rocks fall around them and a pack of dogs is struck and covered by large rocks (we understand that they are dead). Dogs bark and snarl at a man and a boy, they surround the two and close in on them. A large bird runs through thick woods and traps on the ground and in the trees snap closed as it goes by (it is not caught) and it is chased by dogs. A dog is tackled by a large bird and it hisses at it. A dog snarls at another dog and we see its teeth. One dog is particularly aggressive looking with angular features and a deep voice.
► A man falls out of a house that is attached to many helium-filled balloons (we see him falling and then out of sight and understand that he is dead). A house attached to many helium-filled balloons sails into very dark storm clouds, thunder booms and lightning flashes, a man and a boy inside the house are thrown around, the contents are displaced, and the boy nearly slides out the open front door. A floating house crashes onto the ground, a man and a boy inside the house are thrown out, the man grabs onto a garden hose attached to the house and holds on, the boy grabs the man's foot, climbs up his back and back into the house, and the man then pulls himself up.
► A woman is shown in a hospital bed and we understand that she is sick; we then see her husband grieving at a funeral home.
► A man imagines lowering a boy out of the window of a house that is floating high in the air and then imagines dropping the rope and the boy falls. A boy tied into a chair slides down the ramp of a flying zeppelin and falls out (he is caught and is OK). A boy attached to many helium-filled balloons floats toward a zeppelin and crashes in through a window in the vessel and is surrounded by snarling dogs. We see a boy tied into a chair.
► A young boy breaks through an attic floorboard, we see an ambulance and we see the boy with a cast on his arm. A boy is shown with a red mark on his face after he is slapped by a tent pole. A man blows a leaf blower in a man's face. A boy is startled by a balloon floating into his room and he hits himself in the face with his arm, which is in a cast.
► A man gets out of bed and stretches (we hear bones cracking and the man groans). A woman is shown getting news from a doctor and she is upset (we understand that she has been told that she cannot have children). A man closes a door on a boy's foot (the boy says "ow"). A house attached to many helium-filled balloons floats through a cityscape of very tall buildings nearly striking a couple. A large bird is caught in a large net and is taken away in a zeppelin.
► A boy is picked up by a large bird, he is thrown into the air and caught, the bird appears to be playing with the boy, but a man is worried that the boy will be hurt, and the bird snaps and squawks at the man.
► A large bird eats a man's cane (we see bulges in the birds neck), it gags and coughs, and then spits the cane out and we see it covered with slime. Birds cough up a cane and four tennis balls covered with slime. A man talks about finding a "monster" on an expedition and we see a skeleton of the creature he describes.
► A dog snarls at another dog that whimpers and cowers. A man yells at a dog and it cowers. A young girl yells at a boy and he is startled. A dog tells a joke about a dead squirrel. A bird calls to its young in a mournful tone. A man talks about "losing so many dogs" in a dangerous place. A boy takes a shovel and a leaf into thick brush and calls out, "Am I supposed to dig the hole before or after?" (he's apparently going to the bathroom) and we see him tamping a pile of dirt later. A man is told, "You smell like prunes."
► A dog is punished in the "cone of shame" which is the cone collar that snaps around a dog's neck. A house is set fire to and a man struggles to extinguish it. A house, attached to thousands of helium-filled balloons, pulls away from the ground, bursting water pipes and other utility connections as it floats away into the sky.

LANGUAGE 0 - One exclamation ("for the love of Pete").

SUBSTANCE USE - Two men hold glasses of champagne, and a dog opens a bottle of champagne and pours two glasses.

MESSAGE - Life is one adventure after another.

(Note: A short entitled "Partly Cloudy" precedes the feature film and contains scenes of storks delivering a variety of human and animal babies. The babies are created in clouds that form them out of cloud fluff then zap them with a little lightning to bring them to life. One stork is assigned to a storm cloud that creates creatures that have large teeth (alligator), or tines (porcupine), or other potentially dangerous traits (electric eel) each of which end up using them on the stork: the alligator bites the stork's head (it's OK), the stork is pricked by the porcupine's tines (it complains but is OK), and the electric eel zaps the stork (the stork whimpers but is OK). The storm cloud creates thunder and lightning when it becomes angry and rain when it cries.) 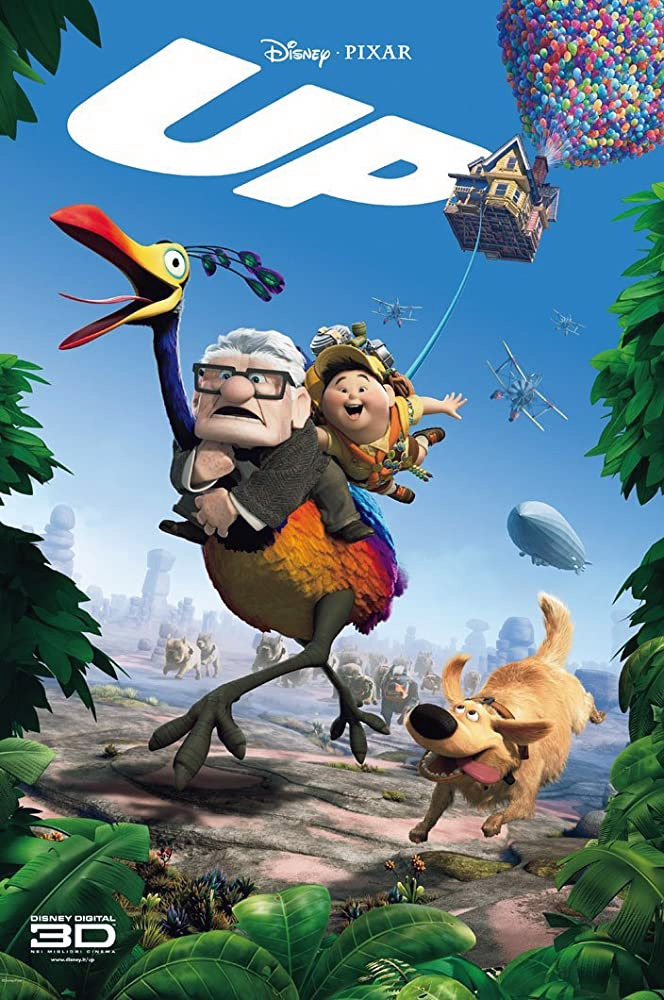