A young man (Andrew Garfield) finds an attractive young woman (Riley Keough) swimming in his apartment pool one night but next morning she vanishes without explanation. Determined to find her, he embarks on a surreal journey across Los Angeles, trying to decipher what he thinks are clues pointing to a bizarre conspiracy. Also with Wendy Vanden Heuvel, Riki Lindhome, Chris Gann, Callie Hernandez, Rex Linn and Topher Grace. Directed by David Robert Mitchell. [Running Time: 2:19]

Under the Silver Lake SEX/NUDITY 8

– A man and a woman have sex on a bed and he thrusts from behind her for an extended period of time, with slapping and grunting and moaning until climax (we see his bare buttocks and legs, her bare breasts, abdomen and partial buttocks). A man and a woman lie in bed together (we see her bare back, legs and partial breasts) and she kisses and caresses his bare chest (sex is implied). A woman takes off her dress and we see her wearing a bra and underwear that reveal cleavage, bare abdomen, bare buttocks and legs to the hips as she straddles a man and kisses his neck; the man asks her about why she is a paid escort. A man masturbates while looking at pictures of women in magazines and photographs (we see bare breasts and abdomens and buttocks) and we see he arm moving rhythmically and hear slapping of flesh. A topless woman sits in bed next to a man after having sex (her bare breasts and upper abdomen are seen).
► A nude man and a nude woman swim in a lake and kiss (we see her bare breasts, pubic hair and abdomen, his chest and buttocks). We see a security video of a fully nude woman wearing an owl mask (bare breasts, pubic hair, abdomen, legs, buttocks and back are seen) walking through a man’s apartment. A nude woman seated on a sofa shows her bare hip and partial buttock, and her bare breasts covered by her arm and shaved genitals. A topless woman is shown on her balcony and a man watches her with binoculars as she dances with a parrot (her bare breasts, abdomen and back are seen). A topless woman cleans her windows as a man watches from a distance (we see her bare breasts and abdomen). A man gets out of bed wearing no pants and walks in a room (we see his bare buttocks and legs). A man removes his clothing after being sprayed by a skunk and we see his bare buttocks, back and legs, and then his chest when he sits in a tub of tomato juice. A fully nude woman sits on the side of a pool (we see her in profile with her arm covering her breasts and we see bare shoulders, side, partial abdomen, hip and legs). A woman wearing a bikini is shown at a poolside and a man watches her. A picture of a nude woman wearing garters and stockings is shown on a man’s T-shirt (her bare legs to the hips, abdomen and cleavage are visible). A woman wears a short dress and thigh-high stockings that reveals her bare upper thighs and cleavage. There are several scenes that show line drawings of nude women in a comic book style (her bare breasts, pubic hair, buttocks, abdomens and legs are seen). A man’s car is keyed by some boys and we see the damaged paint with the outline of male genitals etched on the hood of the car (please see the Violence/Gore category for more details). Three women wear short-shorts that reveal partial bare buttocks and full bare legs. Two women wearing bikinis (cleavage, bare abdomens and legs to the hips are seen) stand alongside a man wearing a pirate costume. A woman wears a full body suit that outlines her breasts, abdomen, legs and buttocks as she dances. Men and women wear swimsuits in a pool and we see cleavage, bare abdomens, bare chests and partial buttocks. Women wear swimsuits at a pool (cleavage, bare abdomens, backs, legs and partial buttocks are seen). A woman wears a short dress that reveals cleavage and stocking covered legs to the upper thighs. A partially obscured poster of a woman exposing deep cleavage and spread, bent knees hangs on a wall. Women wear low-cut dresses that reveal cleavage at a party. Women at a party wear short dresses that reveal their legs to the upper thighs and some glimpses of underwear. A line drawing of male genitals is shown on a bathroom stall wall. A woman wears a dress that reveals part of the side of her breast. Women at a party wear low-cut tops and dresses that reveal cleavage. Three women wear low-cut dresses that reveal cleavage and the outline of nipples through the fabric. A man uses a drone to fly near a woman’s home and he and a friend watch her as she removes her blouse (we see her wearing a bra and cleavage and her bare abdomen are visible). A woman looks at a “Playboy” magazine and a man talks about having masturbated to the woman on the cover (we see cleavage and partial breasts with the model’s hands covering her nipples).
► A man and a woman lie in bed together and kiss (they are clothed and no sex is implied). Two women kiss while dancing at a club. A woman with balloons attached to her costume dances at a club and people with pins pop the balloons as she poses. Men and women dance together at a party.
► A man and a woman talk about the first things they each masturbated to. A woman asks a man if he was masturbating while looking at her when she was by a swimming pool. A man breaks into an empty apartment and finds a sex aid in a shoe box; he holds it and smells it. Many advertisements are shown with sexual innuendo (such as phallus shaped objects near the parted lips of women, or a woman’s face photographed near the spread legs of a man).

Under the Silver Lake VIOLENCE/GORE 6


Under the Silver Lake LANGUAGE 9

Under the Silver Lake SUBSTANCE USE

Under the Silver Lake DISCUSSION TOPICS

Under the Silver Lake MESSAGE

- Conspiracies exist and clues that make no sense may be all around, in comics, video games, products, etc. -- or maybe not. 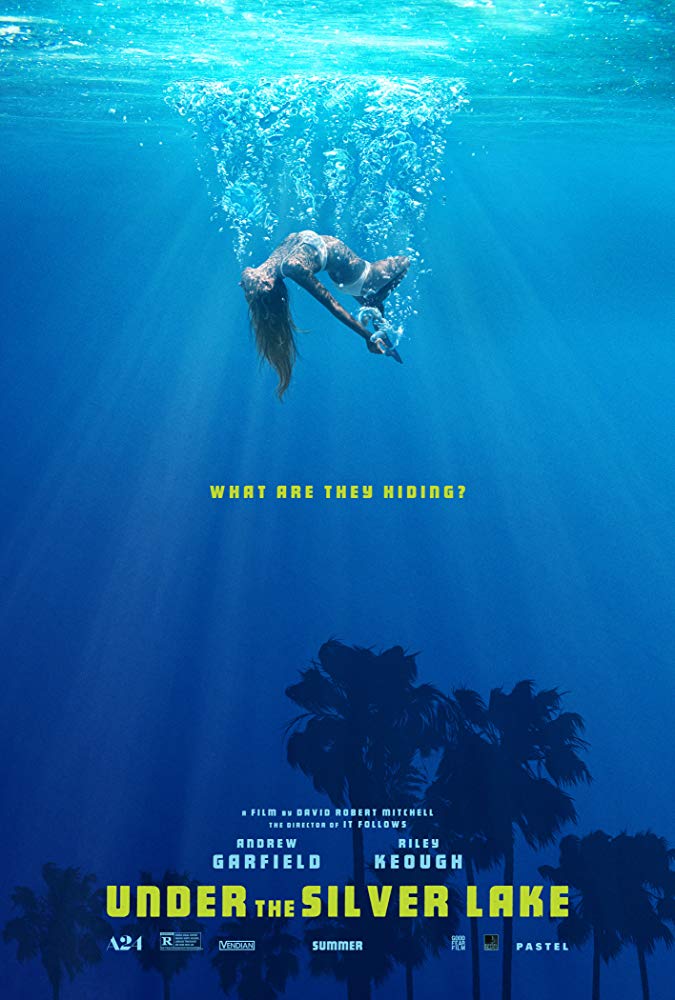