Three American tourists travel to exotic Brazil, and after partying at a way-off-the-beaten-path beach bar wake up to find that they have been robbed. Being at the mercy of a local man who will supposedly help them find their way back home, they are led through a thick forest to the home of a doctor who has very gruesome plans for them: he intends to harvest their organs and sell them. With Josh Duhamel, Melissa George, Olivia Wilde, Beau Garrett and Desmond Askew. Directed by John Stockwell. [1:29]

SEX/NUDITY 7 - A man thrusts into a woman who is sitting on a counter: we hear rhythmic moaning briefly until they are interrupted (the man pulls up his pants and the woman adjusts her skirt).
► A nude woman (we see her bare breasts and legs) sits on a bed next to a man who is bare-chested and wearing swim trunks; it is implied that they have had sex, and she gets up and dresses, and then leaves the room, after taking money from the man's wallet.
► A woman takes off her dress and is topless (her bare breasts are visible) while changing and three men watch her and make suggestive remarks. A sedated woman lying on a table is topless (we see her bare breasts in several shots). A woman nurses her infant (we see her bare breast with the nipple covered by the baby). A woman changes her clothes into a swimsuit and three men watch with interest (we see her in a skimpy bikini). Women wear skimpy bikinis that reveal cleavage, bare abdomens, bare buttocks and bare legs, and women wear varying degrees of low-cut tops that reveal cleavage throughout the movie. Men are shown bare-chested in swim trunks.
► We see a stick figure drawing of a male with over-sized, erect genitals.
► A man and a woman kiss passionately and they are interrupted by several other people. Men and women dance together with suggestive hip movements and one couple kisses.
► A woman asks a man to dance and he makes a comment about his hips not moving like that, "unless I'm naked." A woman translates the lyrics of a song and says that they are all about different sexual positions. Two men talk about all the beautiful women as their reason for choosing Brazil as a vacation spot.
► A man and a woman kiss each other on the cheek (as a greeting).


VIOLENCE/GORE 10 - A woman is injected in the hand with a sedative, a man stands over her and begins cutting her stomach open using a scalpel, the woman moans and we see blood oozing from the opening (we hear squishing and tearing); the man pulls out her navel piercing, pulls the skin flaps open and removes organs (we see each organ as it is removed and the woman is still moaning and tossing her head back and forth, while a man tied to a table nearby watches and is told that he is next). We later see the woman dead slumped in a corner with the large abdominal wound and soaked in blood.
► A man is hacked by another man with a machete: we see the man's fingers pop off and land on the ground behind him, as well as his very bloody arm; he is then struck again (we hear a crunch) and it is implied that he has been killed.
► A man stabs another man in the eye using a wooden skewer, he then lunges on the man and pushes the skewer deeper into the man's brain killing him (we hear the man screaming, we hear squishing, we see the man thrash and we see a lot of blood on his face).
► A man chases a woman through underwater caves (she is nearly trapped without air at several points), the man and woman struggle briefly, she stabs him twice with a spear and he sinks into the water, trailing a stream of blood.
► A man uses a staple gun to close a man's head wound (we see the bloody wound, we hear the loud clicks of the staple gun and the man flinches and yells from the pain). A man attacks another man and pounds on his head with a large rock (we see a bloody gash on his head).
► A woman is chased through a thick jungle by a man with a machete, she falls over a ledge, cracks her head hard on a large rock and slams to the ground below (we see her very bloody head and face and she is dead). A woman kicks a man several times in the stomach and head and another man kills him using a machete.
► A man is shot in the head (blood spurts and pours from the wound). A man is shot through the back of the head as he runs away (we see his distorted and very bloody face). A man is shot in the leg and then knocked unconscious. A man is shot in the hand and another man is shot through the head.
► A man walks along a porch, another man hiding under the porch stabs the man's foot with a hook (we see blood and hear crunching). A woman slams a man's foot using a large rock (he screams). A man dives off a high cliff into water and strikes his head (we see blood in the water and a lot of blood on a large gash in his scalp).
► With the introductory credits we see the eyes of a woman and hear her begging someone not to do something while also seeing flashes of medical equipment (syringes and scalpels, and blood and tissue); it's hard to discern what exactly is happening.
► Two vultures pull at the flesh of something on the ground (we see bloody tissue that could be the remains of a man who was killed, but no detail is discernable). A woman hides under a fallen tree, and ants crawl on her hand and sting her as the man who's looking for her approaches.
► A man chases two boys through a village, one boy throws a rock at the man striking him on the arm, and the man throws a rock back at one of the boys striking him on the head (the boy is hurt, no blood is visible).
► A bus driver drives dangerously on winding roads (the bus closely follows a young man and a young woman riding a motorcycle): the bus swerves and drives very fast, misses three boys walking on the road and winds up teetering on a ledge, falls over the side and rolls down a steep hill (all of the passengers are able to climb out of the bus before it falls).
► Several people swim into dark caves in a few scenes, they swim under water for extended periods and it is frequently not certain that they will find a pocket of air before drowning.
► A man grabs a woman by the hair, another man tries to stop him, and he is cut by a machete and falls to the ground screaming (we do not see blood or the wound). Two men struggle under water briefly. Two men shoot at each other (no one is struck). A man with a crossbow takes aim at a wild pig.
► An unconscious man and a woman are tied by the hands and feet to two poles and carried through a jungle. A man and a woman are slumped over a table after having been drugged and several other people are unconscious on the beach. Several men and women wake up from having been drugged and discover that they have been robbed.
► A woman slaps a man in the face and he is told to leave (the man struck a boy in the head with a rock and the boy's father will be coming to seek revenge).
► We read newspaper articles about tourists having gone missing. People talk about children disappearing and that they are used to harvest organs for transplants.
► A man picks his nose and spits out a window, and a man urinates in a jungle (we hear the trickle).

SUBSTANCE USE - Several men smoke something from a pipe (it looks like a white powder). People drink alcohol excessively in a few bar scenes. A man smokes a cigarette. Two men talk about using hashish and a man talks about wanting a "bag of weed."

MESSAGE - Experiencing new things can be a dangerous proposition. Tourist books don't tell you everything about a country. 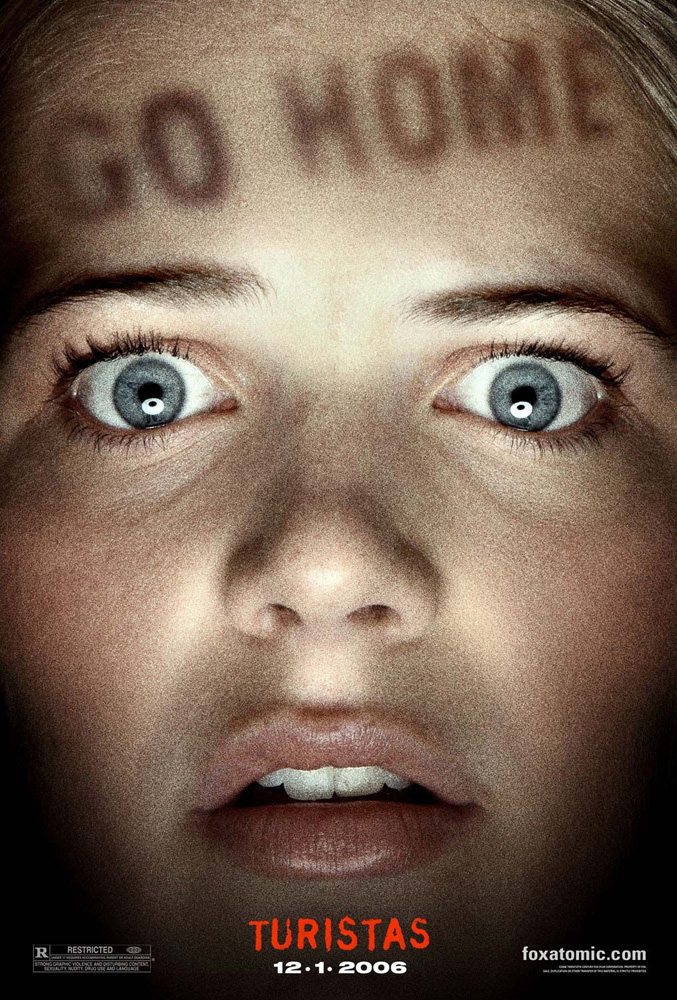