Why is “Troll” rated TV-14? The TV Parental Guidelines Monitoring Board rating indicates that “this program contains some material that many parents would find unsuitable for children under 14 years of age.” The Kids-In-Mind.com evaluation includes frightening encounters between humans and giant trolls that cause destruction and death with little bloodshed shown, discussions of genocide, the use of nuclear weapons to destroy unknown entities, many arguments, and at least 1 F-word and other strong language. Read our parents’ guide below for details on sexual content, violence & strong language. A child (Ameli Olving Sælevik) listens to legends about scary mountain trolls and as an adult (Ine Marie Wilmann) meets the real thing. Also with Kim Falck, Mads Sjøgård Pettersen, Gard B. Eidsvold, Pål Richard Lunderby and Eric Vorenholt. Directed by Roar Uthaug. Originally in Norwegian, dubbed in English. [Running Time: 1:41]

– TV reports show a mine explosion and some footage reveals a 150-foot tall troll covered in mud, twigs, and rocks, with a bulbous nose, shaggy eyebrows, a scraggly beard, sharp teeth, and claws. A man and a woman set up a number of tanning beds to expose a troll to ultraviolet light at night; the man and woman put the skull of the troll’s dead baby in the back of a pickup truck luring the creature to the lights and the truck speeds away from the hulking creature as it stomps through a deserted city, smashing buildings and a bridge; glass shatters and litters the street, the skull falls out of the truck and shatters, and the creature wails, moans and roars; the truck speeds away, screeching tires, but the monster catches it as the man and the woman inside jump out and roll away, but a giant foot almost smashes both of them.
► Armed forces fire bombs, mortars, and artillery at a creature and a man tries to talk with it, but it kills him by throwing him to the ground when it hears more gunfire; the man dies with his eyes open and a woman cries. A troll grabs and swallows a man and we hear crunching. A sonic attack with several loud church bells suspended from helicopters cause a troll to wail and cover its ears and head; it grabs several helicopters, smashing them or knocking them to the ground and causing fires and smoke (the occupants are likely dead).
► Tall and ragged mountains feature large, flat embedded faces with rocky eyes, noses and mouths. A sleeping troll opens one huge eye and awakens, rises from the ground, and chases four people who escape. A troll stomps through several rural and city scenes, growling, roaring, and whining as we see several close-ups of huge feet, boulders smashing into the ground, and angry troll eyes; buildings and vehicles are crushed by the huge feet and electric sparks from neon signs shoot through the air at night. A troll stomps through an amusement park scaring people and causing them to run and scream; a young boy tells reporters he was scared. A fire starts in a forest, shooting tall flames skyward and a troll whines, roars, and stomps away. A man yells at an IT expert and takes her laptop, a nuclear attack is reinitiated, and the man shouts, “Blow it to pieces… Kill the monster”; the IT expert punches him unconscious (we see him with a black eye later).
► A mine explodes: the first explosion sounds muffled and we see some smoke roll out of an opening, the second explosion is loud and accompanied by shaking ground, smoke, and debris as men and women run away, screaming and we hear that several workers and protesters died in the explosion (we see a few bodies in orange mining suits, but no blood is shown). An explosion demolishes the home of an elderly couple and we see and hear the earth shaking, and a growl and a roar as the couple go into the cellar; when it is quiet, they emerge to find only one wall of the house remaining, with broken furniture and stones strewn all around.
► A government official orders a city to evacuate, and then orders the army to bomb the city with nuclear weapons; soldiers with drawn rifles search through a building and find it empty. We hear that a man was fired from his job as a university professor for believing in trolls and was committed to an insane asylum; we see him later, covered in grime and with wild hair and beard and he meets visitors at the door with a shotgun aimed at them. A soldier points a gun at a man that holds a shotgun on him and both men lower their weapons.
► An old cave under a palace is filled with large rib cages, skeletons, and the large and small skulls of troll families that were killed in a genocide. A man says that trolls had been living in Norway until wiped out by Christian settlers; the trolls were sensitive to the smell of Christian blood and fearful and a palace was built on top of the old Troll King’s palace after the Christians massacred his family and left him for dead; we hear that he revived and escaped, and is trying to return to the palace and claim his property. Two investigators find huge footprints around a mining site and a man falls into one, unharmed.
► A mountain mining operation is hindered by lines of protesters shouting “Let the mountain live.” A man and a woman argue with a government official and cabinet members in a meeting, and she dismisses the man and the woman from the project; the man calls an IT expert to hack a nuclear warhead. A woman and an older man argue several times and he shouts. Two men argue twice. A woman argues with an older woman. A woman argues with several people at once. A woman says her mother died when she was 10. A man says to another man, “You’ll be dead before sunlight.”
► A troll approaches lights at the edge of a town, it covers its head and face as a woman rushes toward it and yells at it to go back to the mountains, but the sun rises and the sunlight causes the creature to smolder, fall, and collapse into a hill of rocks and its last open eye glazes over and becomes a rock. A man tastes some dirt. A man spits water onto the ground. A man and woman say they wonder if more trolls are alive in the mountains; elsewhere, something amorphous emerges with a roar from rubble inside a cave.

– Legends can work as cover-ups for bigotry, genocide, and other government atrocities. 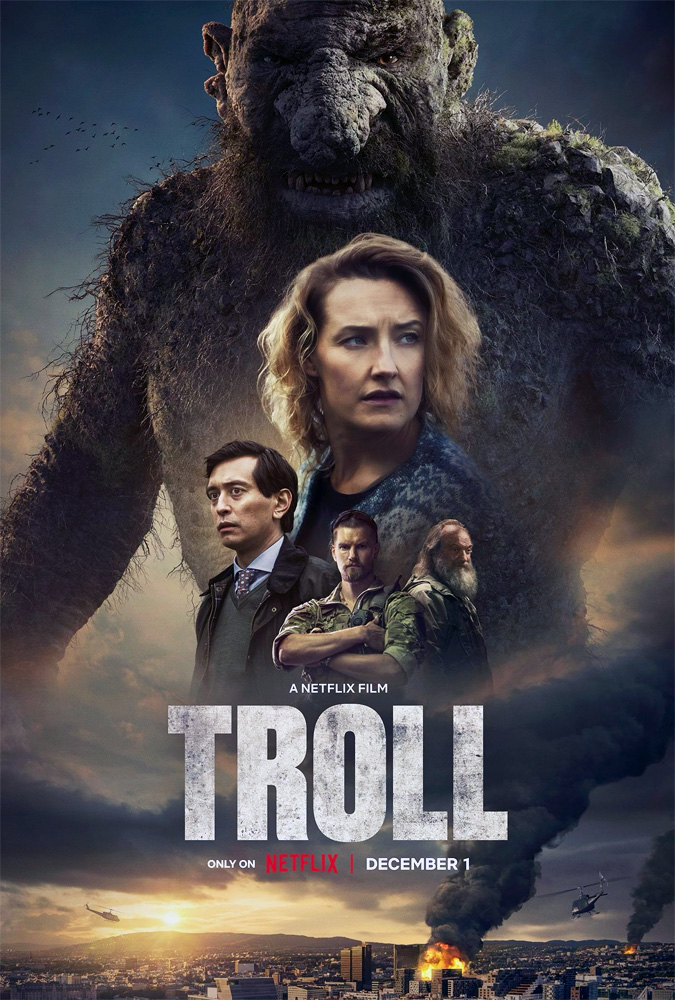