Why is “Triangle of Sadness” rated R? The MPAA rating has been assigned for “language and some sexual content.” The Kids-In-Mind.com evaluation includes an interrupted sex scene, several implied sex scenes, several kissing scenes, a great deal of explicit vomiting, a couple of dead bodies after a yacht capsizes, two people dying from an explosive blast in the distance, several people stranded on an island negotiating for power and control of decisions for the group, a slow and painful death of a donkey off-screen, many arguments, and nearly 20 F-words and other strong language. Read our parents’ guide below for details on sexual content, violence & strong language. A male model (Harris Dickinson) and a social media influencer (Charlbi Dean) manage to join a luxury cruise, and initially appreciate being surrounded by older, very rich and privileged people. However, when the yacht sinks, they find themselves on an island with a few survivors, and they have to figure out their relationship and how to influence an emerging leader in order to survive. Also with Woody Harrelson, Hanna Oldenburg, Alicia Eriksson, Vicki Berlin, Arvin Kananian, Oliver Ford Davies and Amanda Walker. Directed by Ruben Östlund. A few lines of dialogue are spoken in German with English subtitles. [Running Time: 2:27]

– A young man and a woman (we see his bare chest and abdomen while the woman is wearing a bra that reveals cleavage and her bare abdomen) are shown in a rescue vessel and we hear them moaning and we see rhythmic movement as she says that she is going to climax; they are interrupted by the sound of waves banging on the vessel. A shirtless young man (we see his bare chest, abdomen and back) enters a room where a young woman is seated on a bed and he pretends to be a pool boy; they flirt and play their roles as he climbs on top of her and they kiss (sex is implied). A woman sprays water onto a young man’s bare chest, licks his chest and moans.
► A young man and a young woman are seen sleeping in bed together; he is shirtless (his bare back, chest and abdomen are seen), she is covered with sheets and we see her bare shoulders. A young woman jealous of her partner’s relationship with another woman kisses another man in front of him.
► A young woman becomes jealous and angry when her partner is invited by a woman to join her in a rescue vessel each night and she tells him not to do anything sexual, and no kissing. A young woman dances in front of a man at a bar and asks him to dance while her partner watches and seems jealous (the man does not dance with the young woman). A man sits next to two women at a bar and asks them to take his picture; one of the women invites him to take his picture with the two of them and he agrees.
► A man asks a young man if his parents supported his wish to become a male model; he asks if even his father supported him and if he knew he’d be spending time with gay men. A man asks a woman if she ever used her appearance or slept with someone to get a job and she admits to having done so, once. A man instructs a young man to pose with his mouth slightly open to make himself look “more available.” A young woman tells a young man that if she falls pregnant she wants to be with someone that can take care of her because she would not be able to work as a model any longer; she says she wants to be someone’s “trophy wife.” A young man and a young woman argue about his being jealous in a few scenes. “Love Boat” is scratched onto the side of a rescue vessel.
► A fully nude man (we see his bare chest, abdomen, legs to the hips and partial buttocks) sits on a toilet and vomits and has diarrhea (we hear noises and splatters and we do see goo). A woman wearing a full corset (it is flesh toned and we see cleavage, bare legs and later her bare buttocks) clings to a toilet as she vomits and she slides across the floor a few times as the yacht rocks (we see a lot of goo). A dead woman’s body is shown on a beach and part of her bare breast and her legs to the hips are visible.
► Women wear low-cut dresses that reveal cleavage and bare legs while walking on fashion show runways. Many young men are shown shirtless and some are seen wearing bikini briefs while being splattered with paint (we see bare chests, abdomens and upper thighs and hips). A crewmember on a yacht removes his shirt and wipes his chest and abdomen with a cloth while standing near a passenger, and she smiles and greets him. Many shirtless young men are shown while they audition for modeling jobs; they are instructed to smile, then not smile, then walk and pose in certain ways, while being evaluated by a group of people. A young woman wears a blouse that opens to reveal cleavage. A shirtless man wearing boxer briefs is shown in bed and his bare chest, abdomen and back are seen. Women on a yacht wear shorts skirts that reveal bare legs to the upper thighs. A woman on a yacht is shown wearing bikinis in a few scenes and posing for photographs (we see cleavage, bare abdomen, legs to the hips and back). A young woman wears a crop top that reveals cleavage, her bare abdomen and back. Two women wear low-cut dresses that reveal cleavage in a bar on a yacht. A young woman’s dress reveals cleavage and the sides of her bare breasts.

Triangle of Sadness SUBSTANCE USE

– A wine glass is shown on a table in a restaurant, people drink champagne and wine in several scenes, people drink beer, cocktails, and champagne in a bar on a yacht, and a man drinks many shots of liquor while playing a guessing game with another man. A man smokes a cigar in a few scenes.

– Power and control can easily shift, depending on circumstances. The rich are arrogant, self-centered and useless. 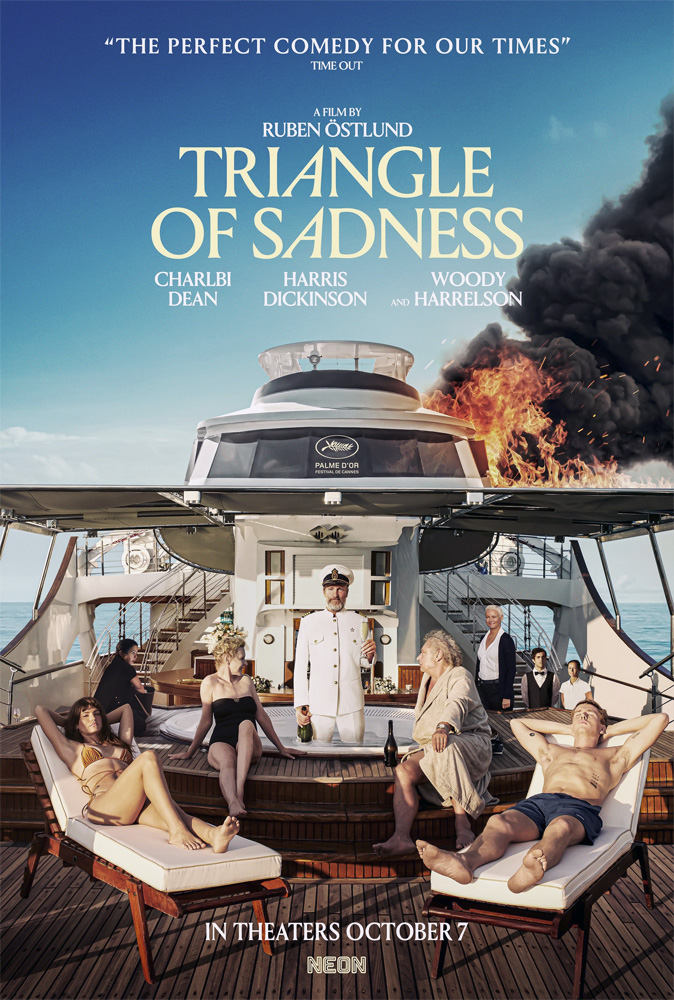