Animated feature based on Robert Louis Stevenson's "Treasure Island," but set in space. Fifteen-year-old Jim Hawkins stumbles upon a map to the greatest pirate trove in the universe and he's off as a cabin boy aboard a space galleon. He's befriended by the ship's charismatic cyborg cook John Silver, who is soon revealed to be a pirate with mutiny in mind. With the voices of Joseph Gordon-Levitt, Brian Murray, Emma Thompson, David Hyde Pierce and Martin Short. [1:35]

SEX/NUDITY 1 - A young boy's pajama bottoms slip down and we see part of his buttock cleavage. A female character (resembling a cat) is drawn with a very shapely figure, tight-fitting outfit and thigh-high boots. Two alien characters are shown holding babies in their arms, suggesting that they married and had children together. A few characters hug.

VIOLENCE/GORE 3 - A spaceship is chased by the blast and debris after a star goes super nova; holes are burned through the sails, a crew member falls off the ship but is saved, another falls off and his life-line is severed by another crew member, the ship is dragged into a black hole and knocked back out by an enormous wave. A building is shot up, a fire starts and the three people inside jump out of a window to safety. A boy sails on his skateboard (it flies through space) toward a portal while dodging debris and obstacles, its motor fails and he plummets, but it starts up again at the last minute. A treasure is booby trapped and the cavern which holds it begins to explode, everything (including pirates) begins to slip through a large opening while a large laser approaches cutting things in pieces; a boy falls and a pirate falls, they catch themselves, the boy falls again but is pulled to safety. Pirates shoot at a boy and a robot and the boy shoot back. Crew members mutiny tearing up the ship, firing guns, chasing the captain and two others who escape in a small vessel and fire back at them (a few fall through an open hatch). A ship crashes onto a landing pad and the pilot stumbles out coughing, gagging and he eventually dies. A boy stabs a crew member in the leg and what sounds like air comes out. A pirate is slammed down hard onto the deck of a ship and rendered motionless. A small vessel crashes onto a planet's surface and one character is injured. A character threatens a boy with cannons and tells him he'll "blow him to kingdom come." A boy sneaks into the camp of pirates, steals a vessel, takes it back to the ship where he is chased by an insect-like pirate who hits him, snaps at him, stands over him and lunges at him. A boy sails off a high ledge on a skateboard, he goes through caverns, through an opening and closing cog, and he is chased by robot police. One character is part robot, part alien and part human; he has a replacement hand with weapons and tools and an artificial eye. A crew member slams another crew member down. An insect-like alien threatens a boy in several scenes: he slams the boy against a mast and holds a claw to his face. A cook guts and cleans shellfish accompanied by slurping, squishy sounds. A crew member swings a blade around threateningly and yells. Three characters are held hostage by pirates. A crew member tightens a bolt in his leg and moans. We see the skeleton of a ship's captain. Crew members slam down onto the deck of a ship when artificial gravity is initiated and they slam back against the mast when the ship takes off. A crew member behaves threateningly to a boy and its head (a separate being) separates from its body and crawls down its arm to a railing. A boy is hit in the head with a boot and he chases the alien who threw it. Crew members yell at and threaten each other. A robot goes a little bonkers with sparks flying and talks about having "lost his mind" (literally). A young boy looks at an animated, pop-up story book that is telling the story of an alien pirate ship battling with a merchant ship: pirates board the other ship and fight its crew with swords, slashing back and forth. We see a bowl of wiggling jelly worms and an alien slurps them into his mouth. An alien slurps up some food with its long tongue. An eyeball floats in a bowl of soup. A character talks about having to take something "out of my cold, dead fingers." A character says: "they'd have gutted us." A man is sprayed with green goo from a passing orca. One alien communicates using noises that sound like passing gas, its name is "Flatula" and once while sleeping it snores and blows air into a boy's face (he reacts negatively).

SUBSTANCE USE - A character is shown smoking a pipe.

MESSAGE - We must each chart our own course.

(Note: All but a boy and his mother appear to be alien creatures with various sizes, shapes and features.) 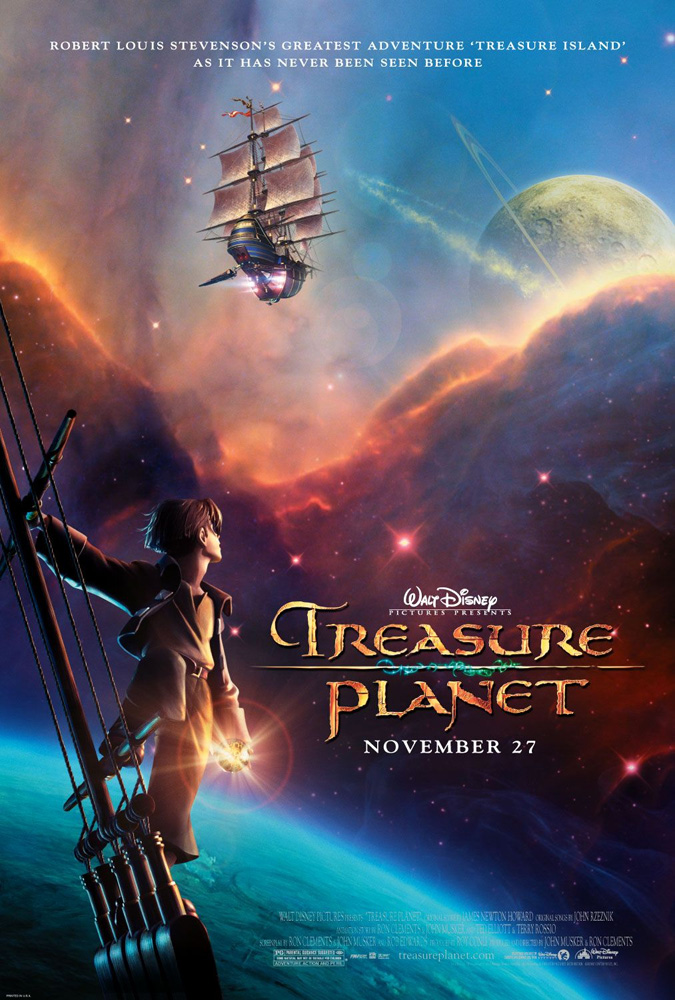