SEX/NUDITY 2 - A man and a woman take off their wet clothes -- the woman down to her underwear and the man is bare-chested; the woman kisses the man, he pushes her back onto a table and they kiss again. A woman wears a short skirt and we see her bare thighs, and a man takes off his shirt and we see his bare chest.

VIOLENCE/GORE 6 - A man threatens another man with a gun, shoots him in the head (we see blood spray on the car window and on the man's head) and shoves him out of a car. A man shoves a cloth into the mouth of a man who lies in a hospital bed connected to tubes and the man suffocates. A man is shot dead and two others are shot and wounded. A man is shot at by many men, and he uses another man as a shield; he then goes underwater with the now dead man, puts his lips to his, and draws the air out of the dead man's lungs and into his own. A woman shoots a man in the back and we see blood seeping through his shirt. A grenade launcher is fired repeatedly and many men shoot guns into a house that explodes, sends rubble and flames everywhere and two people inside are forced to scramble as the house crumbles; they get into an elevator and are chased by a column of flames. There is a shootout where a man kicks down a door and comes in shooting while the people inside shoot at him; he then kicks and punches many men who kick and punch him, and some try to hit him with axes -- he ends up with a bloody mouth. Another fight scene in a bus has a man surrounded by men and he starts punching and kicking, and one man crashes through the windshield of a bus; men use pipes and knives -- one man is stabbed in the arm and another man is nearly stabbed in the crotch when a knife is thrown at him. Another fight scene has a man fighting off groups of two and three men at a time mostly with kicks and punches -- one man is hit in the head with a piece of wood. Oil is spilled on a floor and men slip and slide trying to fight with another man who puts bike pedals on his feet and kicks many men. A man grabs another man around the throat with his feet and tosses him off a moving truck and onto the road. A man dangles from underneath a moving truck and a man in a car traveling next to him shoots at him; the man hanging from under the truck throws a tire iron at the car hitting the driver and sending the car swerving off the road. A man is shot at while he drives a truck, a piece of glass is jammed into his hand by another man and the two men fight while the truck drives erratically. A man kicks the window out of a truck, beats the driver of the truck and tosses him out the door (we see the driver sliding along the road and over a cliff). A man shoots at a car as it speeds away. A man hits another man in the face and holds a gun on him -- there are several other scenes where men and women hold guns on each other. A man punches another man who falls on the floor unconscious, and a man slaps a woman in the face. A woman is zipped into a bag and shoved into the trunk of a car. A man uses a knife to open a hole in the tape over a woman's mouth and a man ties a rope around a woman's neck (it acts as a makeshift leash). A woman taped to a chair is left in the middle of a road; a car speeds toward her and slams on the brakes at the last moment, the driver gets out and puts the woman in the trunk. A man opens the trunk of a car and sees a bag wriggling. A man jumps onto and dangles from the side of a truck and then jumps off an overpass onto a bus below. A car explodes sending a man hurtling through the air; he lands on and breaks another car's windshield. A barrel is pushed into water and shot causing it to explode. A man parachutes out of a plane, lands on the back of a truck and his parachute covers the cars following, causing them to crash. A man carrying a woman tosses her at two other men and he then kicks and punches them until they are unconscious. A woman running down a hill stumbles and falls and tumbles into the arms of a man. We hear about two police officers being "blown to bits" in a car explosion. There are a few discussions about people dying in a transport container. There are a few car chases where people drive recklessly while being chased by other cars; a car is driven off a bridge and onto the top of a car transport truck, cars weave through traffic, drive through narrow streets, nearly hit pedestrians on a sidewalk, and drive up and down stairs. A man drives a car through a garage door, then through a gate. A man vomits out a car window (we see some goo) and his head gets stuck in the window as the driver raises it. We see a man with a scarred and bruised face.

MESSAGE - Rules are made to be broken. 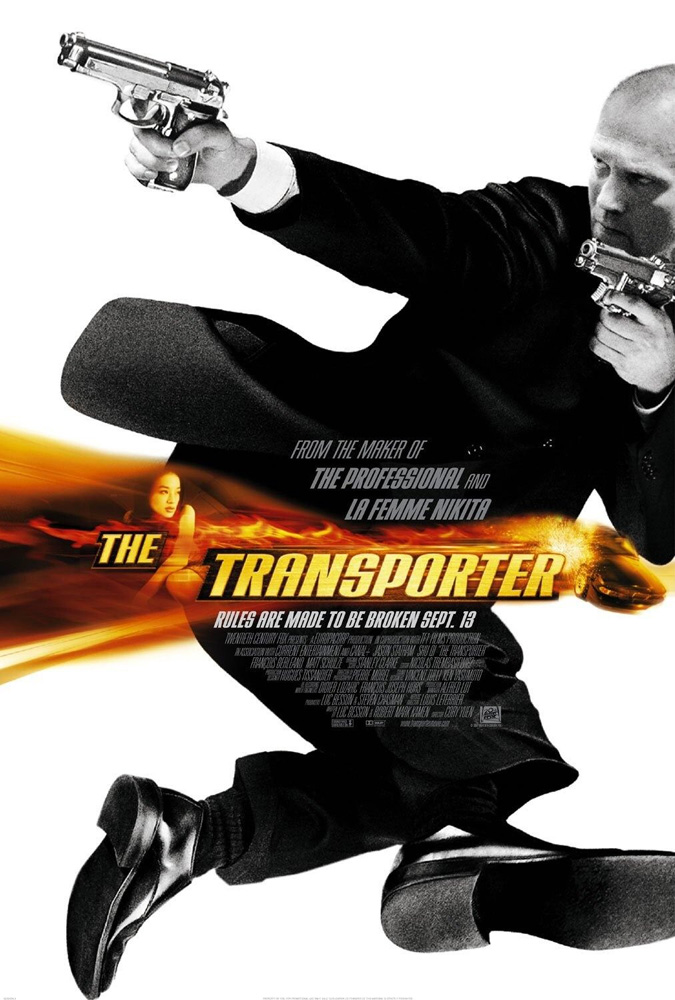