A professional hockey player nicknamed "The Tooth Fairy" (Dwayne Johnson) is summoned to a meeting with the Fairy Godmother (Julie Andrews) after telling a young girl that there is no such thing as the Tooth Fairy. He is then sentenced to two weeks of Tooth Fairy duty, for being a dream killer. Also with Ashley Judd, Stephen Merchant, Ryan Sheckler, Seth MacFarlane, Chase Ellison and Destiny Whitlock. Directed by Michael Lembeck. [1:41]

SEX/NUDITY 2 - A man and a woman kiss in a few scenes. A man hugs a woman and kisses her on the cheek, and she says, "Let's not get frisky."
► A man thinks a teen boy is asking him about puberty and starts talking about the changes in his body being totally natural, until the boy interrupts him. A teen girl talks to a teen boy and compliments his guitar playing, and another boy approaches and threatens him, telling him to stay away from his girlfriend. A man talks about being nervous about getting serious in a relationship with a woman. A man talks about shrinking himself and walking all over his wife's body, leaving tiny foot prints. A man tells a teen boy, "I bet you get a lot of chicks with that guitar."
► Several men are shown shirtless (their bare chests and backs are visible) in locker room scenes. A woman wears a low-cut top that reveals cleavage in several scenes. A man with wings on his back is enveloped in a bright light and as it swirls around him, his clothes are changed into tights and a pink too-too.

VIOLENCE/GORE 3 - A hockey player is slammed through the protective glass around the rink and we see one of his teeth fly into the air (a fan yells out that he caught the tooth).
► A hockey player trips and falls to the ice. A hockey player is slammed by another player and he falls to the ice. A hockey player is slammed against the rink wall several times during games.
► Two men shove each other, they both hold magic wands, and one zaps himself in the face and yells that he can't see. Two men slap each other on the chest several times, with increasing force.
► A boy approaches another boy and threatens him to stay away from his girlfriend; then a man and taps the threatening boy on the head with drumsticks, telling him to return the guitar he took from the other boy (the boy returns the guitar and walks away nervously).
► A man and a woman scream when they see foot prints depressed into their carpet and a table is knocked over (they think there are ghosts in their house); the woman faints and their dog bites an invisible man's wing (we see the dog dangling from the wing later).
► A miniaturized man is pushed off a bed by a sleeping boy and falls to the floor (his fall is broken by a stuffed animal); the boy wakes up and screams, the man runs into the hallway where he is cornered by a large car, he skateboards into the air and over the cat, the cat chases him, and the man blows a loud horn and the cat scurries away. A miniaturized man tiptoes past a sleeping cat.
► A man is flung into the air while learning how to fly: two other men throw tennis balls at him striking him repeatedly (once in the crotch) and he yells and flinches. A man jumps off a balcony, forgetting that he cannot fly and crashes to the ground (we hear him yell and hear a thud). A man jumps over a fence and lands on the ground hard; he then jumps up hitting his head on a structure and falls down.
► A man runs through a crowd yelling and shoving people as he goes; he is grabbed by two people and dragged back where he is surrounded by several fairies holding magic wands.
► A man flies while holding a teen boy, and the boy screams as they fly high over a city. A man shrinks himself to miniature size, climbs on top of a hockey puck, slides on it along the ice, the puck is slammed by a hockey stick and we see him, yelling on the way, sail into the goal (he's unharmed).
► A man sprays himself with invisibility spray that does not make him disappear totally and a woman is alarmed to see him. A man eats "shrinking paste" and a woman watches as his head stretches, expands and shrinks into odd shapes. A man eats some "shrinking paste" and shrinks to miniature size (he yells as he shrinks); another man (still regular size) raises his foot over him but does not step on him.
► While a man is sleeping, we see two bumps protrude through the back of his shirt at shoulder height; he wiggles and tries to scratch them and large wings sprout.
► A man yells at another man. A woman yells at a man and tells him, "We're through." A man is dismissive of another man's past success and abilities. A man tells another man, "You have the eyes of a shark, but deader." A man accuses another man of having "wing envy." A man threatens to punch another man in the nose. A man tells another man, "I could poke you."
► A man flings "amnesia dust" into the faces of several people and we see them staring blankly; he also flings some dust into the face of a dog and the dog's eyes roll around. A man moans and complains of being sick while on a date with a woman. A man barks like a dog after eating a special mint in a couple of scenes.
► A young girl is upset when she wakes up and the tooth fairy has not left money for her tooth. A man takes money from under a young girl's pillow to use in a poker game.
► A man places ketchup dipped French fries in his mouth and pretends to be a vampire; he then drops his head in his plate and says he's dead while a young girl giggles.

SUBSTANCE USE - A man in a dark corner offers another man "the stuff," and it turns out to be knock-off fairy potions that are faulty. 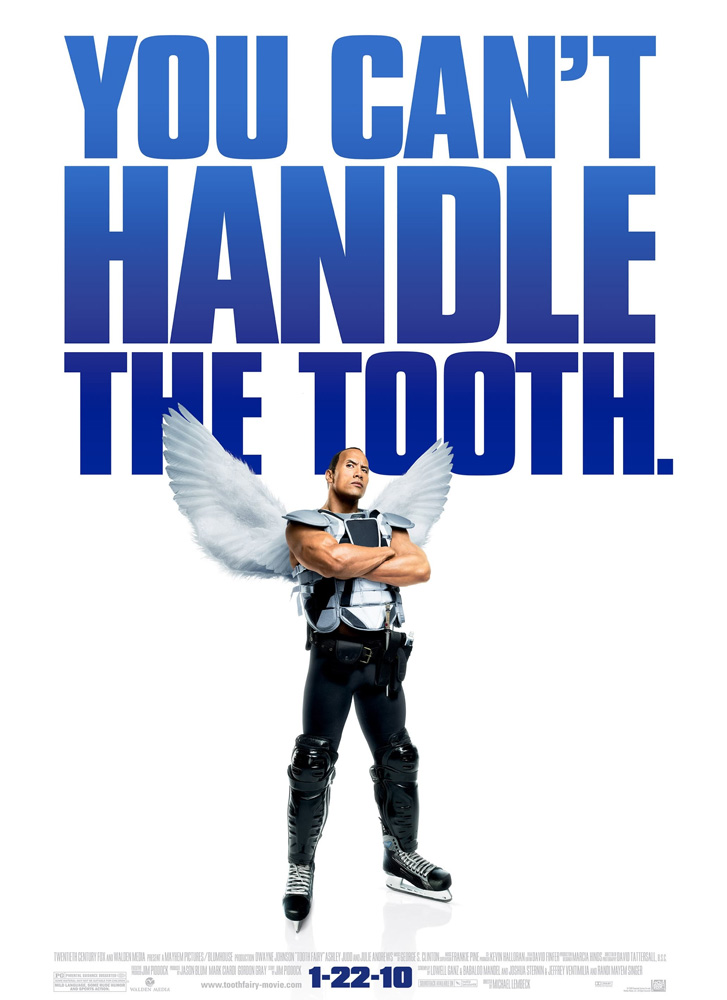