A group of student archaeologists on a dig in France stumble onto time travel technology and use it to rescue their team leader who has traveled back to 14th century feudal France. They don't realize that the day they will be traveling back in time is the day of the French invasion on the English in Castlegard, and they find themselves drawn into the battle. Based on Michael Crichton's novel. With Ethan Embry, Anna Friel, Neal McDonough, Paul Walker and Frances O'Connor. Directed by Richard Donner. [1:56]

VIOLENCE/GORE 5 - A man is stabbed through the chest (we see his clothes poke out from the back as a sword goes through him) and he falls to the floor dead with blood on his chest. A man holds a sword on a man then runs him through (the man is dragged along behind a cart briefly, then cut loose). A man is stabbed in the chest with an arrow and falls dead, a man is shot with an arrow, and a hatchet nearly hits a man in the head. Two men fight with swords, one has his ear cut off (we see blood on the ear and the side of his head) and the other is stabbed in the stomach. A man is chased through woods by a man on horseback who swings a sword at him (we see him later with blood on his face and a large bloody gash on his side). People fight with swords, some are slashed, some are run through, and a woman is grabbed by a man who is then stabbed and smothered by another man. Many men fight with swords, men are hit by arrows and slashed with swords, and a man is stabbed in the abdomen. Two men roll down stairs, one lands on the ground and the other holds a sword over him. A man trips another man, hits him with an axe and another man stabs him in the back. People are chased through a forest by men on horseback and wielding swords (this happens several times); one is slashed and we see blood on the blade, and one is shot in the back and chest with arrows (we see him lying dead with arrows sticking out of his chest). A man turns around to see a man on a horse charging him and he is slashed with a sword (we hear a slash). Two armies fight, one in a fortress and the other on the ground: One army launches balls of fire from a trebuchet into the fortress (we see some men running engulfed in flames), and flaming arrows are shot and many men are hit. Arrows are shot and many men are hit: we see them being pierced and hear them groan as they fall to the ground, and an arsenal explodes (we see people being thrown through the air by the blast). A woman talks about having killed a man. Three men punch and kick a man until he's unconscious, and a man kicks a man in the face. A man shoves another man who falls on the floor and hits his head on a metal rack (he appears dazed). A man is surrounded by many men with swords and he is hit on the head. A woman swings at and kicks a man several times. A woman slips while climbing over a roof, a man reaches through the thatch and grabs her hands, and she climbs along beams and through a window. A woman spits on a man, he slaps her in the face, and she slaps him back. People are trapped by men on horses with swords and they are taken to meet a man who suspects them of being spies. A grenade explodes causing people to be thrown through the air and glass to shatter. A wooden structure is set on fire and when doused with water the fire burns hotter. A shack where a man and woman are is set on fire (they climb out). People scream from pain during the time travel process (it is described as being "broken down to a molecular level"). Two men fight with wooden swords (they are practicing). People yell at each other in a few scenes. A man hacks at a door with an axe trying to reach a man and a woman on the other side. Two men are tied by the hands to the back of a carriage and pulled along. A man describes a battle between the French and English and that the French won because they were angry at the English for having murdered a woman and hung her for the French to see.

MESSAGE - We make our own history. The price we pay for progress is the loss of life. 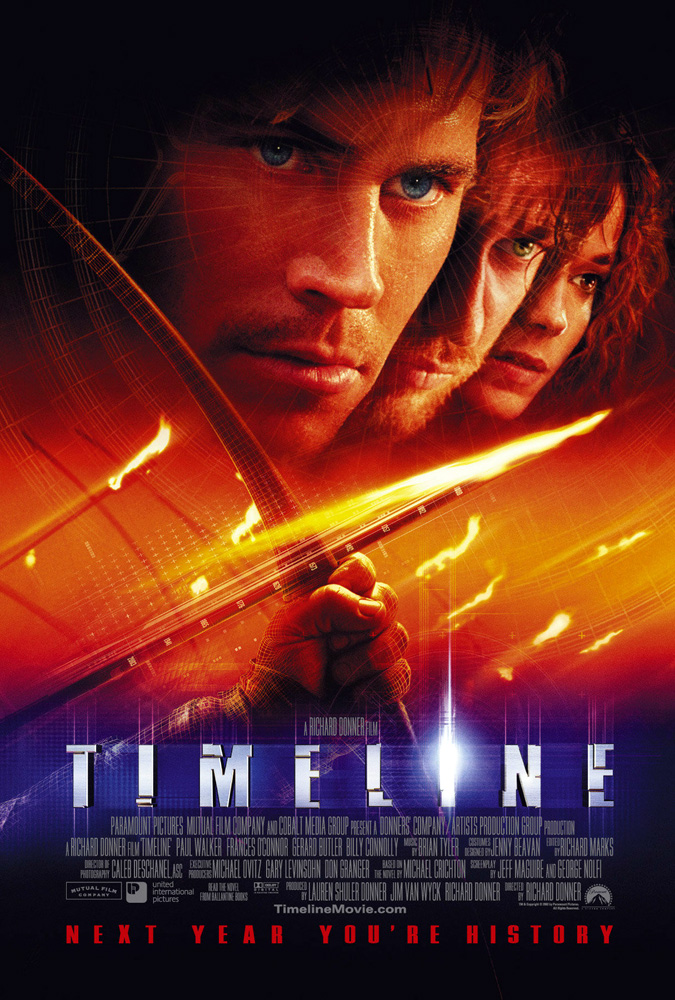