Why is “Thirteen Lives” rated PG-13? The MPAA rating has been assigned for “some strong language and unsettling images.” The Kids-In-Mind.com evaluation includes many scenes of treacherous cave dives during a rescue mission to retrieve 13 people ending in the death of one man and a few scenes of people panicking and ending up with bloody scrapes, a few disagreements, and at least 2 F-words and other strong language. Read our parents’ guide below for details on sexual content, violence & strong language. Drama based on the 2018 rescue of 12 boys and their soccer coach, who ended up being trapped by rapidly rising waters 2.5 miles inside a Thailand cave for 18 days. When almost all hope was lost to find and bring them out, two experienced British cave divers (Viggo Mortensen and Colin Farrell) led a daring effort to carry everyone out through the flooded cave network. Also with Joel Edgerton, Tom Bateman, Paul Gleeson, Girati Sugiyama, Teeradon Supapunpinyo, Pasakorn Hoyhon, Tanatat Srita, Nophand Boonyai, Kaokuson Sorapap, Sukniran Sukcharoen, Ensai O’Haire, Thanthapthai Chanin, Achi Jinapanyo, Thanaphat Thopiata, Phitakphong Boonnet and Joe Chuensawan. Directed by Ron Howard. Many lines of dialogue are spoken in Thai with English subtitles. [Running Time: 2:02]

– A couple of scenes show a shirtless man wearing boxer shorts and we see his bare chest, abdomen, back and partial legs.

– A diver’s tank gets snagged on the guidelines and when he removes the tank to untangle it, the regulator gets jammed in rocks and releases most of the air remaining in the tank; the diver tries to swim back to the entrance of the cave, runs out of air and we hear the regulator wheezing and watch the man drown (we later see his body with blue-tinged skin).
► A man is trapped in a flooding cave when the pump he is operating fails; a diver takes the man out and the man panics trying to remove the mask and breathing equipment, he tries to surface and hits his head on the cave ceiling (we see some blood in the water and on his head). A diver swimming through a flooded cave with a sedated boy realizes that the boy seems to be waking up, the man stops swimming and reaches for a hypodermic needle filled with a sedative but drops two needles out of a pouch; he scrambles to find them under the dark surface of the water, picks them up and injects the boy before he wakes fully. A diver with a boy loses his grip on the guideline in an area with heavy currents and cannot find it again; he follows a power line but loses his way and fears that he is lost until another diver arrives.
► Divers swim through narrow passageways pulling guidelines, we hear their tanks scraping the rocks as water continues to pour in and when a wall of the cave collapses they are pelted with falling rocks. Divers swim out of a flooded cave and we see them being tossed around in heavy currents and pummeled by falling rocks from the cave walls (we see them with bloody cuts when they finally get out). Two divers exit a cave and we see one with a bloody head wound and another with a bloody hand or arm. Two divers move through narrow passages underwater searching for bodies anticipating that the children are dead after 10 days. Several Navy SEALs swim to a part of a cave where the boys are and they realize that they have used up too much air to be able to swim out safely.
► Twelve boys and a man are suited up in diving gear with masks and breathing equipment one at a time, they are sedated and after they fall asleep their hands and feet are bound and they are led through the dark and flooded caves by a diver; they are injected again periodically throughout the dive to keep them from waking up. We see boys after they have not eaten for many days and they are emaciated; we hear that oxygen levels are getting dangerously low in the part of the cave where the boys are found. After being taken out of a flooded cave, twelve boys and a man are placed on stretchers and carried out, sometimes with large umbrellas covering them from the press and onlookers, and some are flown away in helicopters and others taken in ambulances (we see some of the boys with bloody scratches on their feet and hands).
► Many scenes show various people and groups unloading gear for diving and preparing for rescue missions. Many scenes show people trying to divert rainwater from going through sinkholes in a mountain and into a cave where boys are trapped by rising water inside.
► A young boy being prepared for a dive says, “I can’t swim.” A man receives word that his father was taken to the hospital and that later that his father died. We hear that after the dive, one diver died from a blood infection that he contracted during the rescue. Men argue about sedating children to get them out of a cave and one man says that if they do, they will be killing them; he fears the children will choke on their own saliva or stop breathing altogether. A woman yells at an official for not bringing the children out sooner and she fears that they will not bring her son out because he is not a Thai citizen. A man pleads with divers to bring him his son’s body (fearing that the child is already dead). We hear news reports in many scenes of the number of days the 13 people have been trapped in a flooding cave and the progress of the rescue mission. Farmers agree to have rainwater diverted into their fields understanding that they will lose their crops. A man asked to help with a rescue mission says, “I don’t even like kids.” We hear that after the monsoons continued to dump water into the cave it remained completely flooded for 8 months. Boys tease a seemingly younger boy about his mother’s choice for a birthday cake.
► Thunder rumbles and heavy rain falls in many scenes and there is talk of an early monsoon.

– A man agrees to sedate boys to get them out of a cave safely and we see him and divers injecting the boys with hypodermic needles containing Ketamine, and men practice injecting hypodermic needles into plastic bottles. A man says, “I’ll meet you in the pub.” Men smoke cigarettes in a few scenes. 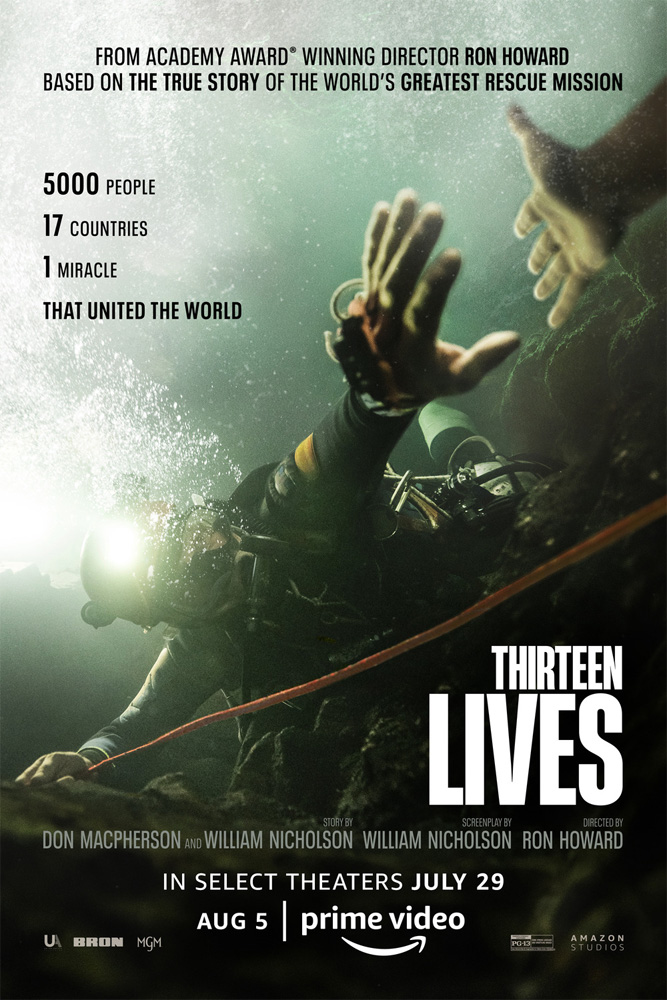