Why is “They Live” rated R? The MPAA rating does not include content details. The Kids-In-Mind.com evaluation includes a brief sex scene with nudity and several cleavage revealing outfits, several scenes show aliens with skeletal features and glowing eyes, several gunfights with bloody wounds shown, and a few fights with one extended fight leaving both parties with bloody wounds, and 10 F-words and other strong language. Read our parents’ guide below for details on sexual content, violence & strong language.” Based on the 1963 short story “Eight O’Clock in the Morning” by Ray Nelson: In this cautionary sci-fi cult classic about frenzied consumerism and commercialism, a drifter (Roddy Piper) discovers sunglasses that allow him to see those in power as the alien monsters they really are, and all the advertising as simple brainwashing messages to be docile and buy more stuff. Also with Keith David, Meg Foster, Peter Jason, Raymond St. Jacques and Norman Alden. Directed by John Carpenter. [Running Time: 1:34]

– A nude woman is shown straddling and thrusting on top of a man (we see her bare breasts, abdomen and partial thighs and we see his bare chest and abdomen).
► A sign reads, “Marry and reproduce.”
► A shirtless man is shown. Women are shown wearing low-cut tops that reveal cleavage in a few scenes. TV models are shown wearing outfits that reveal cleavage. A billboard shows a woman wearing a bikini (cleavage, bare abdomen and legs are visible). Two men are shown with open shirts and we see their bare chests and abdomens.

– A man with several weapons enters a bank and guards open fire on him, he shoots back and we see some blood splatter on walls (the splatter is in black and white). A woman holds a gun on to a man’s head, the woman is shot and the man shoots a machine that explodes before the man is shot by someone in a helicopter (we see some bloody wounds). A woman hits a man on the head with a bottle and shoves him out of a window and down a hill (we see him with blood on his face and a bloody nose). A man fights with two police officers, he steals one officer’s gun and shoots the other; the first officer hits the man on the back and the man shoots him (no blood is shown). Two men shoot two guards (no blood is shown).
► Two men fight in an extended sequence that shows them punching, kicking, body slamming and head-butting each other: one man swings a board at the other and breaks a car windshield, the other man picks up a bottle to use as a weapon but it shatters so they continue punching, throwing, biting and eye gouging (they both end up with bloody swollen faces and they limp away together). Men are shown loading boxes into cars outside a church and speed away as police in helicopters and cruisers surround the building with guns drawn and go inside. A construction vehicle moves through a homeless camp destroying tents and lean-tos as people run and scream and police shove people to the ground; we see police beating two men with repeated blows. An explosion throws many people around a room; many armed police officers enter shooting and we see people being struck and falling injured and dead with some blood shown; two men jump through a portal in the floor and get away from the gunfire. An explosion blows a door open and two men shoot many others (we see blood, some of which is black and white). Armed guards run through an office chasing two men and people scream as alarms blare.
► We see aliens being transported to other planets through a portal (no special gear is worn). An alien uses a device to disappear. A man wearing special glasses stares at another man when he sees his face looking skeletal with glowing eyes. We see many skeletal looking people walking through sidewalks, streets and in stores. A skeletal looking person speaks into a watch on his wrist and says, “I’ve got one that can see,” when he is recognized as an alien.
► A man shoots a drone out of the air and holds a gun on a police officer, and he grabs a woman and forces her into a car; she drives to her home and the man goes inside with her. Two men run from police and climb into a building where they find other people hiding. A street preacher speaks to people gathered on a sidewalk and police arrive in a cruiser; they approach the man as one holsters his nightstick. Police helicopter patrol above streets at night. A man climbs into the back of a garbage truck and is dumped back out onto the road.
► People watching TV complain of headaches as the signal is interrupted in a few scenes. A blind man touches another man’s face and the other man pulls away and leaves. A man threatens another man.
► Several scenes show people sleeping in alleys and makeshift camps. Many people are seen lined up in an unemployment office and we hear an announcement about the curtailment of the food stamp program; a woman tells a man that there is nothing available for him. A man hides in an underpass after having been injured and falls asleep.
► A man talks about his father having “turned mean,” when he was young and that he “tried to cut me,” and he ran away. A man talks about his family and that he hasn’t seen them in 6 months because there’s no work where he’s from. A man talks about being like cattle bred for slavery. A man talks about a weird epidemic of violence. Signs, newspaper, magazine headlines, and covers read, “No independent thought,” “Obey,” “Submit,” “Watch TV,” “Buy.” A man holds paper money with “This is your God” on it. A loudspeaker plays the word “Sleep” repeatedly. A comment is made about, “Splatter your brains.”

They Live SUBSTANCE USE

– A man talks about wearing special glasses feeling like a drug and that you come down hard after taking them off. People drink champagne at a gathering. A man smokes outside.

– Resist authority and commercialism and don’t be manipulated by advertising. 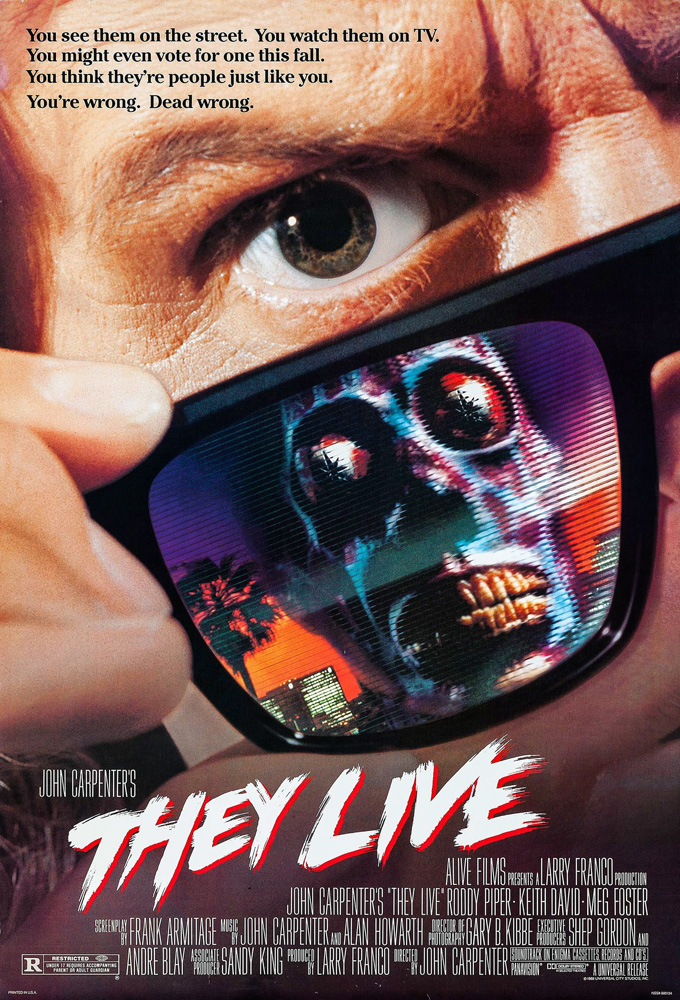