All of New York City struggles in the grip of a demented villain (Tohoru Masamune) and his clan until four strange brothers rise from the sewers to become the heroic Teenage Mutant Ninja Turtles (Pete Ploszek/voiced by Johnny Knoxville, Alan Ritchson, Noel Fisher and Jeremy Howard). Under the mentorship of their master (Danny Woodburn/voiced by Tony Shalhoub), the Turtles join forces with a reporter (Megan Fox) and her colleague (Will Arnett) to fight the villain's plan. Also with William Fichtner and Minae Noji. Several lines of dialogue are spoken in Japanese, with English subtitles. Directed by Jonathan Liebesman. [1:41]

SEX/NUDITY 2 - A woman wears figure hugging jeans that emphasize her hips and thighs throughout the film. A woman wears clingy, tight tops that reveal cleavage and emphasize her bosom. Women wear scoop-neck tops or dresses that reveal cleavage and some bare arms/shoulders. A billboard features a woman from the waist up wearing only a bra and revealing cleavage and her bare abdomen.
► A Teenage Mutant Ninja Turtle has a crush on a woman, telling his brothers he has "dibs" on her, smiling at her, offering her his secret stash of soft drinks and singing a rock-and-roll love song off key while hanging out the back of his van; the van drives away from the camera as male voices inside the van say, "Give up Mikey." A man stares at a woman's clothed buttocks as she leans out of his passenger window while he is driving.
► A man asks a woman colleague on a date several times and she always refuses. A man tells a woman colleague that she does not need to make up work assignments in order to spend time with him and she becomes defensive in denying his accusation; he finally accepts her refusals.

SUBSTANCE USE - Two incense cones of an unknown substance burn in close-up briefly and we see wafting smoke, villains steal unknown biological chemicals from cargo containers (please see the Violence/Gore category for more details), high doses of adrenalin cause four Turtles to chatter quickly and gesture wildly as well as run and jump and roll, two flashbacks show small turtles injected with an unknown liquid, a centrifuge distills turtle blood into a green chemical substance containing a mutation agent, and Turtles say they have injected a rat/man with a healing compound (we do not see it). A blurry banquet scene features tall glasses of dark and clear beverages (possibly alcohol) on tables; no one is shown drinking. 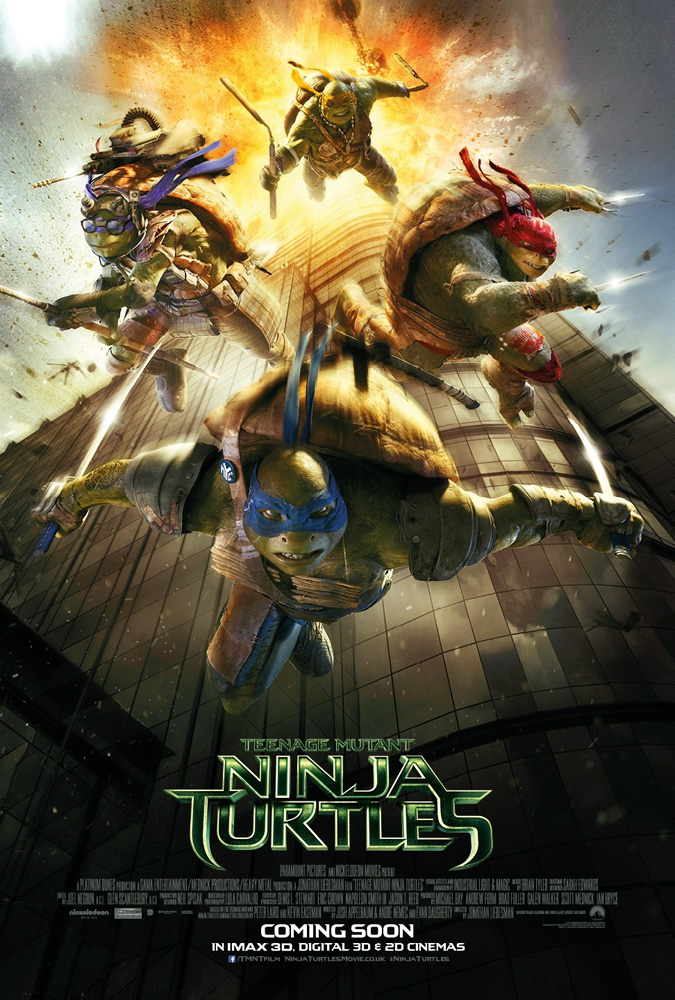