Ricky Bobby (Will Ferrell) is a NASCAR superstar, winning one race after another on the circuit. That is, until a flamboyant French Formula 1 driver joins his team and Ricky is beaten and crashes horribly. After recovering he becomes afraid to drive and must wrestle his demons to get back behind the wheel. Also with Sacha Baron Cohen, John C. Reilly, Michael Clarke Duncan and Amy Adams. Directed by Adam McKay. [1:45]

SEX/NUDITY 4 - A man asks a woman, in crude terms, if they are about to have sex: she climbs across a table, they kiss, they moan and grope each other, and other people in the bar watch.
► A husband and wife kiss passionately, he lies her back on a dining room table where their two young sons, her father and a friend are eating dinner, she wraps her legs around him and the scene ends.
► A woman flirts with a man who is not her husband and kisses him while her husband watches. Two men who are lovers kiss, and two men who are not lovers kiss. A man and woman kiss. Two men who are lovers hug and one taps the other on the buttocks.
► Two women in a background scene wear bikinis, and pose hugging a man. A woman wears low-cut and short tops that reveal cleavage and her bare abdomen in many scenes. A woman lifts her top revealing her bare breasts to a man (we see only a part of her chest; no breasts are visible). A man removes his driving safety suit and runs around the track in his jockey shorts, in a couple of scenes. A man wears a T-shirt and boxer shorts.
► A woman moans and appears aroused when cars race below the stands where she sits (she talks about liking the vibration). Two men walk holding hands, and one tells the other not to be alarmed by his having an erection (one is homosexual and one is heterosexual).
► A man talks about having sex in the bathroom of a restaurant and about his wife becoming pregnant. A man introduces another man as his husband. A man tells another man to kiss him on the lips (he does not). A man tells another man that his wife grabbed his crotch. A man tells another man that he posed for a pornographic magazine and that he revealed part of his anatomy. Two men compete over the sexual positions their nations have created. A man autographs a woman's breast (the part that's revealed by a low-cut top). A man talks about being aroused while driving fast on a race track. A woman tells her husband that she is angry because he is still afraid to let her see him nude. A boy talks about a man being promiscuous. A man makes a crude comment about a whale and a dolphin having sex. A remark is made about a man sitting on a pole and then it is explained that it doesn't have anything to do with his sexual orientation (it is a racing term). A man makes a crude remark about looking up a woman's skirt. A man refers to his wife as a "stone cold fox."

VIOLENCE/GORE 4 - A man stabs himself in the leg, he screams (we see a bit of blood on his pant leg), two other men try to take the knife out by using another knife to push it out, and the man continues to scream.
► A man swings at a man who spins him around, pins him on a pool table and then breaks his arm (we see the arm bend unnaturally, hear a crunch and the man screams). A man punches another man in the face (we see his bloody nose).
► A car slams into the wall of a race track, the car flips in the air and crashes to the ground, then flips repeatedly, and the driver gets out and appears to be OK but insists that he is burning; he then rolls on the ground screaming, takes off his racing suit and runs screaming in his jockey shorts.
► A man opens the door of a car and a cougar inside the car snarls and snaps at him; he closes the door, gets in the car and we hear the cougar attacking him (we see him later with cuts and scratches on his face).
► Two cars crash together, they flip over, then spin along a track and one is in flames (both drivers get out uninjured). Many cars crash on a race track (we do not see injuries but we see crumpled cars).
► A man speeds in a car when chased by police. A man wearing a blindfold drives a car into several parked cars, and then swerves and drives into a house. A man drives into a police officer and knocks him onto the hood of the car. A man backs a car into a woman's shopping cart (groceries are strewn around the parking lot). Two cars touch while speeding on a race track, they spin around but are OK.
► A man speeds in a car with his wife in the back seat -- she is in labor -- and he slams on the brakes, we hear a squish, and a baby cry (the woman apparently delivers the baby).
► A man shoots a gun in the air in a crowded bar. A woman slaps her two young grandsons in the face. A man throws buckets of water on a sleeping man.
► A man is carried out of a school by a janitor and security guards for giving an inappropriate talk in front of a classroom. A man yells and kicks an arcade game when the car he is driving in the game crashes.
► Two men argue and get very close to each other. Two boys threaten to beat up their elderly grandfather. Two boys are repeatedly disrespectful and insulting to people.
► A man throws beer cans out of car windows and on the ground in a couple of scenes. We are told that a man died in a fire (he didn't really).

MESSAGE - Winning means nothing if you do not have people who really love you. You don't have to win to be loved. 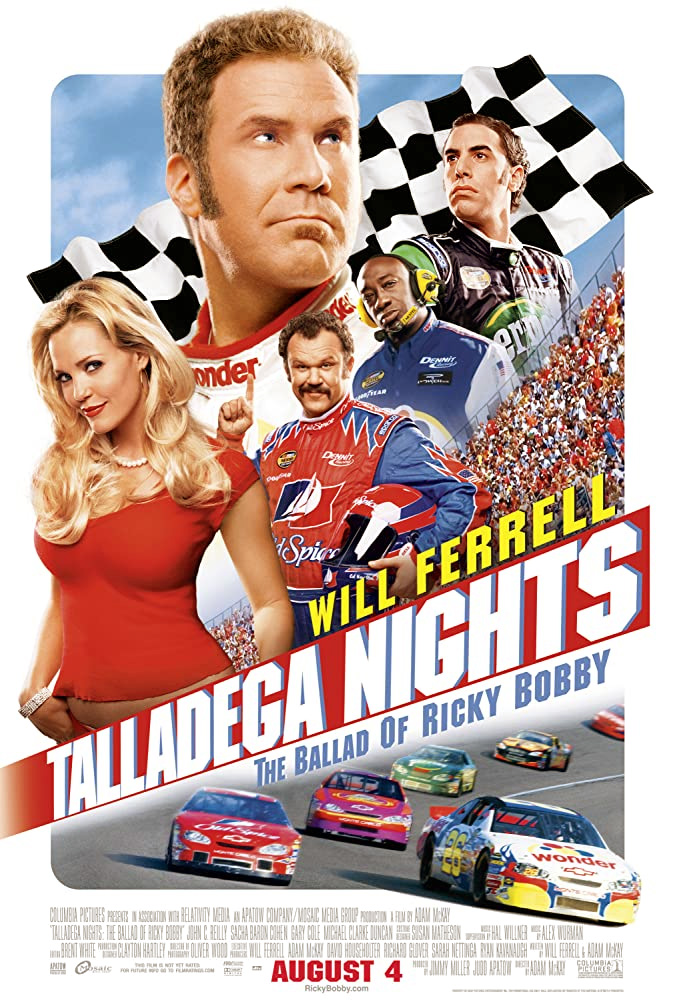