Ghost thriller inspired by a Korean legend: After spending time in a mental institution, two sisters return to their lakeside home and join their father and stepmother. Their stepmother tries to pretend they are a happy family, but the sisters become increasingly bitter, and strange apparitions and supernatural events create an atmosphere of dread. With Im Sun-yeong, Yeom Jeong-ah, Kim Gab-su, and Mun Geun-yeong. Directed by Kim Jee-Woon. In Korean with English subtitles. [1:54]

SEX/NUDITY 3 - A man and a woman lie in bed together and the woman sleeps. We see a woman in a nightgown that reveals bare shoulders and part of her back. A girl's nightgown is backlit and we see the outline of her legs. A girl lies in bed and we see a few bloodstains on the sheets around her legs (we see her bare thighs) and we are told that she has started her period.

VIOLENCE/GORE 7 - There is a perpetual sense of dread and foreboding throughout the film, and many jump scenes. A woman enters with boiling water in a kettle and tries to splash the girl with the water; the girl stabs the woman's hand with scissors, they struggle, the woman falls onto the floor where fish hooks have spilled, the girl tries to run, the woman grabs her foot, the girl falls hard on the floor hitting her head (we hear a loud crunch) and we see her feet twitching. A girl finds a woman in a closet with a rope around her neck, the girl panics trying to free her, the closet tips over and lands on the girl and we see her bloody face and watch her hands scratch and tear as she trying to get out; she then falls still. A girl has a nightmare and we see a figure clad in black; the figure climbs on the girl's bed, stands over her, blood trickles down the figure's leg, a hand crawls down the figure's leg and we see a glimpse of an ashen face with a bloody mouth. A girl finds a blood-soaked sack, and she tries to open it; when she leaves and comes back the sack has moved, she follows a trail of blood, finds the sack in a closet. A woman finds a dead bird in a girl's bed (we see the bird and a spot of blood on the sheets), the woman attacks the girl, they wrestle, and the woman drags the girl by the arms and locks her in a closet; the girl screams and pounds on the door. A woman holds a heavy statue over a girl who lies on the floor motionless, and the woman drops the statue (we do not see more than this). A woman hears a noise in the kitchen, goes to investigate, looks in a cabinet, under the sink, then leans up, and sees a limp person sitting at the table and a charred hand reaches out and grabs her arm. A woman opens a closet, pulls on a rope, and something oozes out. A girl twists a bird's neck (we hear it snap), and a girl with a stick beats a sack repeatedly. A woman watches and is scared by something that's stepping out of a closet. A woman appears to be choking, she flops onto the floor, she thrashes, gags and convulses; medicine is administered to her and she vomits (we see goo) and another woman screams. A girl has handprints on her arms from where someone apparently had been holding her tightly. A girl is frightened when she hears footsteps outside her bedroom door, the door creaks as it opens and we see ashen fingers wrap around the edge of the door. A man lifts the cover off a birdcage, finds blood on the rungs and two dead and bloody birds (we see the man burying the birds later). A girl opens a cage door and finds dead birds inside (we see only the side of one motionless bird lying on the floor of the cage). A girl has a nightmare that a woman drags a heavy, blood-soaked sack through a house, and then beats it with a stick repeatedly (there could be a body inside). A woman says that she, "saw a girl under the sink" and we see a very brief image of what looks like a charred form under the sink. A girl has a nightmare with a quick succession of images: people running in the woods, a bloody hand and a bloody bandage. A girl finds a piece of paper soaked in blood in a refrigerator, she drops it on the floor and it appears to contain bloody tissue of some sort, but it is not clear. A man tells a girl that another girl is dead, and the girl screams and cowers. A girl yells at and shakes another girl. People argue in several scenes. A woman yells at a girl. A girl looks at photographs and appears frightened by what she sees. A girl walks along a wooded path, she appears frightened, and she goes into an abandoned greenhouse. Two girls look at birds in a cage and one asks the other, "shall we kill them?" We see spots of blood on bed sheets (it is suggested that a girl has started her period). A girl knocks a tea setting off a table. A woman says, "there's something in this house." 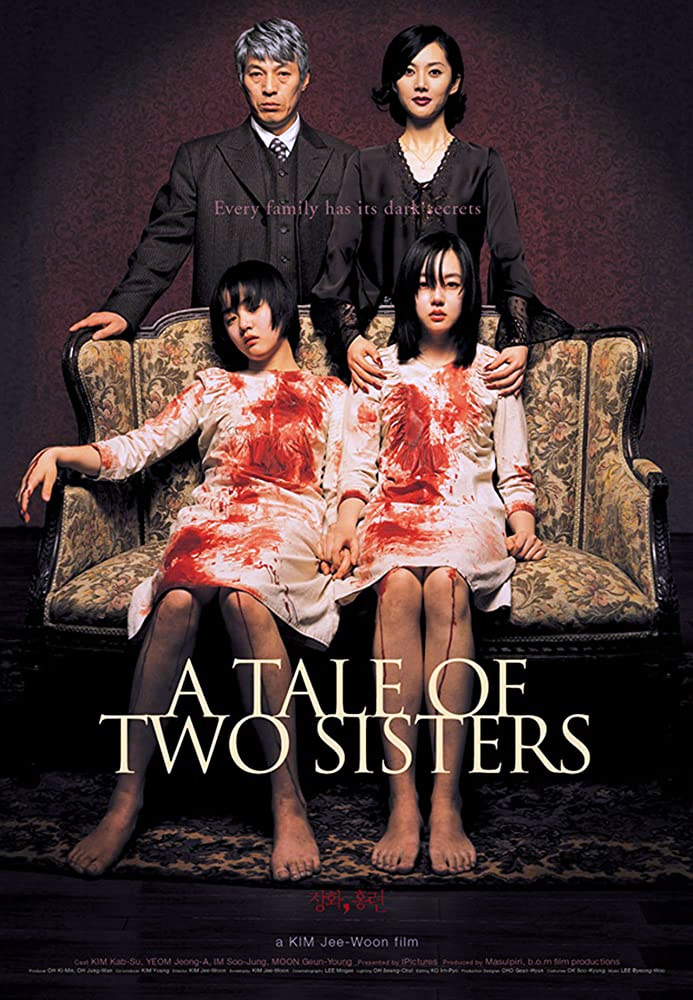