Katherine Heigl stars as a woman who's good at taking care of everyone but herself: she's a career bridesmaid who spends her time helping others get down the aisle. That is until she is asked to help plan the wedding of her baby sister (Malin Akerman) who is engaged to the man she has been secretly in love with. Also with James Marsden, Edward Burns and Melora Hardin. Directed by Anne Fletcher. [1:47]

SEX/NUDITY 5 - A man and a woman kiss passionately in a car, the man removes his shirt (we do not see his bare chest) the woman climbs on top of him, and they fall back into the seat (nothing else is shown but it is implied that they have sex).
► In several scenes we see a man and woman kiss passionately, and they caress each other's faces and backs. A man and a woman hug.
► A woman is seen changing clothes in a taxi while the driver peeks through the rearview mirror, and we see her removing her clothes and her bare shoulders, arms, legs and feet are visible. A woman is seen standing in her underclothes (bustier, slip and panties), and we see bare shoulders, thighs, and legs as she puts on a dress. We see a woman dressed in several very short dresses (her bare shoulders, thighs and legs are visible) and in another scene a group of women are dressed in short, tight leather dresses (cleavage, bare shoulders, thighs and legs are visible).
► A woman's dress rips and we see the flesh on her lower back and the top of her underwear. In another scene we see a woman in a shirt that reveals her abdomen. A woman is seen sitting on a toilet while another woman holds her dress out of the way (we do not see any nudity, but we hear her trickling).
► A reference is made to a woman feeling shame for spending two days in bed with a man and it is implied that they had sex -- the woman is wearing the man's shirt.
► In several bar scenes and wedding reception scenes we see men and women dancing together.
► A woman tells another woman that she looks so good that she "might be into her." A woman mentions that a benefit of not being married is that she can still have "hot sex with random strangers." A woman makes several sexual remarks including about a man "keeping it in his pants," "not getting laid" and about a man and a woman "getting naked" and making "sweet love for hours." A woman uses the word "Caulk" and "Caulker," in a way that could be taken as a sexual reference. A reference is made to a man and a woman having "interoffice sex," getting pregnant, and having a "shotgun wedding." A woman makes a comment about a man ripping her dress to shreds with his teeth. A bride is said to have slept with the groom's father, brother, and sister. A young boy comments on how "hot" an older woman looks. A woman was teased when she was child and told she was the president of the "Itty Bitty Titty Committee." A man sees a woman changing clothes in a cab and he later comments that he liked her thong and that he saw her changing.


VIOLENCE/GORE 3 - A woman slaps another woman hard across the face and in another scene we see a woman slap a man. A woman is knocked to the floor by a crowd of women (we hear that her head hit the floor and later see her lying unconscious; when she comes to, she is dizzy and can barely walk).
► We see an angry woman yell an obscenity and beat her purse repeatedly against a wall. We see an angry woman throwing things at another woman. A woman attempts to spray bug spray at another woman. We see two women arguing and tussling with one another.
► A woman makes a reference to shooting herself. A woman says she feels like blowing her brains out. A reference is made to a little girl's mother dying while she was very young. A reference is made that a person's handwriting is very peculiar, resembling that of the Unabomber. A man is said to be hypnotized by a woman's voodoo. A woman is introduced to a boy who is obviously from another country and she makes a racial remark when trying to give him a greeting in his native language (others in the room look uncomfortable when she does this).
► A man and a woman lose control of a car, the car spins around, the woman says they are going to die, and the car runs down a small hill and is stuck in mud (no one is hurt).
► A woman is seen sitting on a toilet while another woman holds her dress out of the way (we do not see any nudity, but we hear her trickling).

SUBSTANCE USE - A man and woman get drunk, during several wedding reception scenes guests drink champagne and get drinks from the bar, people are seen holding and drinking mixed drinks and sitting at the bar, people drink wine with their meals, a woman is not feeling well and asks for liquor to relieve her pain, a woman makes a reference to drunken groomsman at a wedding, a man calls two bridesmaids "Twiddle Dee" and "Twiddle Drunk," and several known brands of liquor are mentioned. Several people smoke cigarettes in bar scenes.

MESSAGE - People have to live their own dreams, and not try to live through others.

(Note: A woman compares herself to Jesus by saying that she is Jesus.) 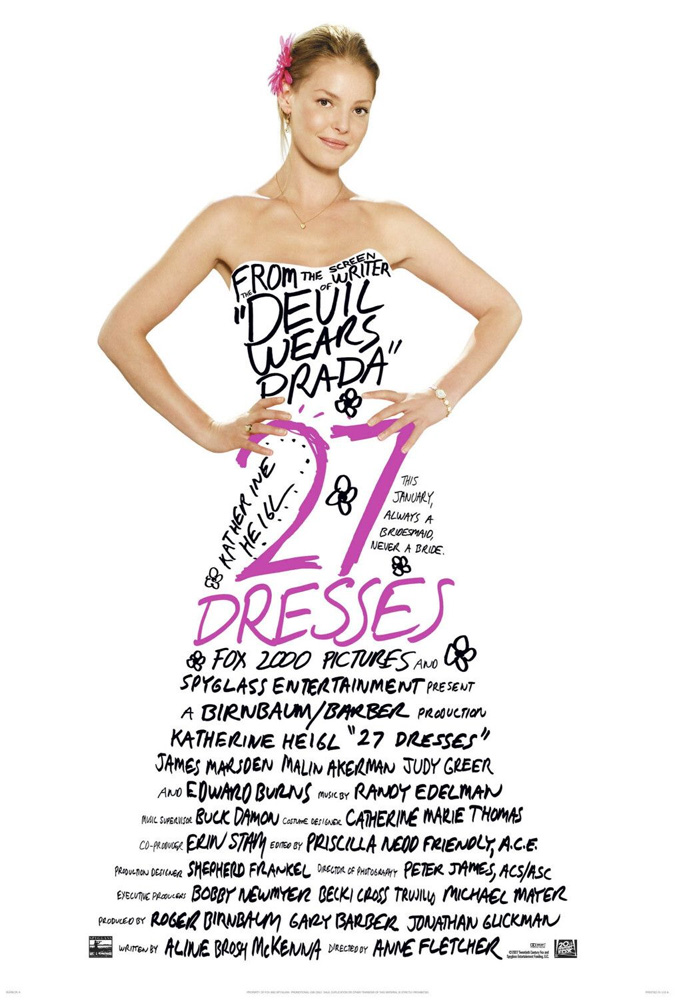