Presumably the set-up for the popular 1970s TV show about the detectives with the souped-up 1974 Ford Torino. Owen Wilson and Ben Stiller take on the roles of police detectives Ken "Hutch" Hutchinson and Dave Starsky, partners on the seedy streets of Bay City, and Snoop Dogg costars as Huggy Bear. Their first case is to determine the killer of a man they find floating in the water. A business card in his wallet leads them to a crooked business man (Vince Vaughn). Also with Fred Williamson and Juliette Lewis, Jason Bateman and Amy Smart. Directed by Todd Phillips. [1:40]

SEX/NUDITY 5 - Two women kiss a man and caress his chest, then the two women kiss each other, they remove their tops (we see only bare shoulders). A woman climbs onto a man's lap and kisses him, and a man kisses a woman. A man kisses another man on the cheek, and two men hug. A woman changes her clothes in front of two men: she removes her top (we see her bare back and the side of one bare breast) and the two men react to seeing her bare breasts; then removes her shorts and the men stammer while looking at her. Cheerleaders dance with suggestive moves, and they're wearing tiny outfits that reveal cleavage, bare abdomens, bare thighs and parts of their bare buttocks as two men look on with interest. A man asks another man to show him his belly button, he lifts his shirt, and we see his bare stomach; the first man acts aroused and asks the other man to walk across a room, lean against a chair and act like a dragon. Then we see a man sitting on another man's back (both are bare-chested) riding him like a horse. A man walks along a street lined with X-rated theaters and stores and a woman appears to proposition him. Men and women dance in a nightclub. A man wakes up in bed with a woman (he is bare-chested and wears boxer shorts). Men and women are flirtatious in several scenes. We see many women in bikinis around a pool, a man admires them, and a woman wears a short skirt that reveals bare thighs. Two men are bare-chested in a bathroom (they have hand towels wrapped around their waists), then other men enter the room bare-chested. A man wears swim trunks and is bare-chested, and a woman wearing a bikini applies suntan lotion to his chest and back in a couple of scenes. Women wear low-cut dresses that reveal cleavage, bare shoulders and backs. A man asks another man what he's wearing (over the phone). A man touches a man's hair (to see if his curls are natural or a perm). Two men dance in a competition: we see them wiggling their hips, thrusting their hips, and one opens his jacket (he's bare-chested). A man makes a sexual gesture with his hands. A man says to a 13-year-old girl, "rock into womanhood."

VIOLENCE/GORE 5 - A dead body is discovered floating in water, and a police officer pokes it in the crotch with a stick. A man shoots a man who flips backward off a yacht and into the sea. Two police officers chase a man, slam him into a fence, knock him to the ground, and one sits on him. A man throws a man on the floor, and a police officer shoots a gun in the air. Two police officers holding guns break down a door, and go into an apartment: a boy flips over a counter top, grabs knives and throws them at the officers, hitting one in the arm, and the other in the leg and back (we see blood on his sweater). A man hits a man with a golf club and he falls unconscious to the floor. A house explodes and a boy is thrown through the air (we see him in the hospital with a cast on his leg and arm). A police officer pulls a gun on a man, he shoots a car trunk open, he shoots a man, and another man runs while shooting his gun in the air in a crowded ballroom; the police officer and another officer chase the man, and one is hit by a car (he rolls over the hood). A police officer threatens a man with a gun, then holds the gun to his own head (playing Russian roulette), then fires it into the ceiling. A car chase has two cars racing through a golf course, across the green and over sand traps, while shooting back and forth at each other. A man shoots at two police officers, they shoot back, and he races away in a car. A police officer shoots into a garage killing a pony (we hear it whine, see it collapse to the ground and see a little girl scream in horror). A police officer shoots a gun across a room, the bullet hits an iguana and we see that half of its tail has been shot off (a man holds the iguana in one hand and the tail in the other). A police officer pulls a man over a bar and slams him on the floor, other men in the room hit the officer with pool sticks, and then two police officers kick and punch the men into submission. Two men in a car race off the end of a pier hoping to land on a yacht but crash into the water. Two men argue, one jumps on the other, they tussle and are separated by other men. A police officer shoots at a man, chases him, jumps off a roof, lands on another roof, jumps off a fire escape, and chases him through the streets. A man slaps a man in the face. A man squishes a lit cigarette in his hand. A dog jumps on a man and bites at his arm (the dog is called off before the man is injured). Three armed men rob an illegal gambling shop. A man yells at two men in several scenes (he's a captain yelling at detectives), and a man yells at a man over the telephone. A man makes racially offensive remarks (he calls an African-American man Amos) and he's generally disparaging and dismissive.

SUBSTANCE USE - People are shown drinking alcohol and smoking cigarettes, and a man drinks coffee laced with cocaine.

MESSAGE - Deep friendship among police partners helps protect each other. It is inevitable that every '70s TV show will one day become a major motion picture. 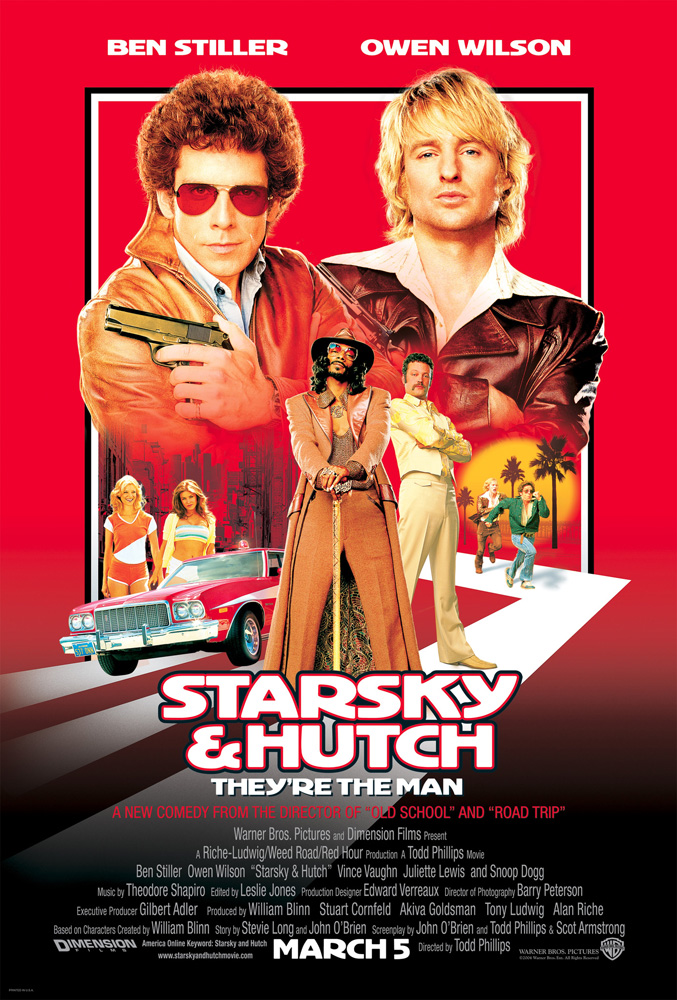