Maverick DNA scientists (Adrien Brody and Sarah Polley) are researching cures for human diseases, and ignoring legal restrictions, they splice human and animal DNA to obtain an infant human/animal hybrid (Abigail Chu and Delphine Chanéac). The female baby grows into a winged human with a rabbit-like head, bird-like legs and a tail with a stinger. It bonds with the two scientists, but the situation deteriorates and become dangerous when she grows older. Also with Dave Hewlett, Brandon McGibbon and Simona Maicanescu. Directed by Vincenzo Natali. [1:44]

SEX/NUDITY 8 - A female human/animal hybrid (she has a human head and torso, bird-like legs and a long tale) and is nude in a barn: we see human breasts, nipples, abdomen, thighs and groin in a full frontal nude shot (there is no genital opening or body hair), a man enters, she opens wings from slits in her arms and back, embraces and kisses him, he pushes her back, they embrace and lie on the floor, he pulls his pants and underwear down several inches (we see the small of his back and part of his abdomen), they thrust and moan with the man on top, they flip to the female being on top, continue thrusting, moaning, and gasping as they kiss, and he caresses her chest and abdomen; they flip again, she moans and gasps loudly, her long pink tail extends up over the back of his head, a long stinger thrusts out into the air, and the scene ends.
► A female human-animal hybrid apparently transforms into a male, chases a woman, tackles her, holds her on the ground, whispers, "Inside you," and proceeds to rape her; the creature is nude, but nothing is seen while thrusting, and a man stops the attack by impaling the creature with a pole (please see the Violence/Gore category for more details).
► A man rubs a woman's thigh while they sit on a couch, they kiss several times and engage in intercourse, while apparently fully clothed; a female human/animal hybrid stares at the couple through a curtain from another room as they writhe, thrust, groan and gasp.
► A woman straps a female human/animal hybrid by the wrists and ankles to a table in a barn (please see the Violence/Gore category for more details), with a pair of long scissors she cuts her dress and we see human chest, breasts, nipples, abdomen, thighs, and double knees (no genital features). A human/animal hybrid swims in tub of water while a surveillance camera shows her nude with full chest, breasts, nipples, buttocks and thighs (no genitals are visible).
► The heads of two synthetic blob-like creatures appear in the shape of penis heads, complete with a slit in each one. We briefly see a Leonardo Da Vinci drawing, which depicts a fully nude man (his bare chest, abdomen, legs and penis are evident).
► A female human/animal hybrid dances with a man, she begins to kiss him, he pushes her away and says no, he walks away and the creature looks sad.
► A female infant human/animal hybrid appears to have a human body, bird legs, and a scorpion-like tail; she is shown nude, growing quickly, until the age of 6 years, when she is dressed in a dress that reveals thighs, double knees, calves, and hand-feet, and during teen and adult phases she is shown wearing a low scoop neck dress that reveals moderate cleavage and bare thighs. A woman wears a tank top that shows cleavage, bare arms, and shoulders, and a low cut blouse with straps that reveals bare shoulders, arms, upper chest and cleavage. A decal on the side of a laboratory machine depicts a dancehall girl wearing a low-cut bodice that reveals significant cleavage, petticoats raised thigh-high above high-button shoes and bare legs and thighs.
► Two scenes depict a man and a woman in bed, fully dressed and talking. A man and a woman discuss pregnancy: she says she does not want to go through it, but she'll develop a method for a man to become pregnant and the man says it would ruin his figure.
► Two living male and female blob-like creatures seem to hold hands with long, leafy, purple tongues that seem to have fingers and a scientist says, "Love at first sight"; several days later the female changes into a male without explanation.
► When a nude female human/animal hybrid is shown, we see bare thighs that lead down to a double set of knees and in place of feet there is an additional pair of long-fingered hands with something like turkey feet as well. A woman is shown to be pregnant and it is unclear whether she was impregnated after being raped by a human-animal hybrid.

SUBSTANCE USE - We see bottles of alcohol in a lab refrigerator and a man pours whiskey into a glass and drinks it.

MESSAGE - When one creates life, one is responsible for its welfare, not entitled to abuse it. 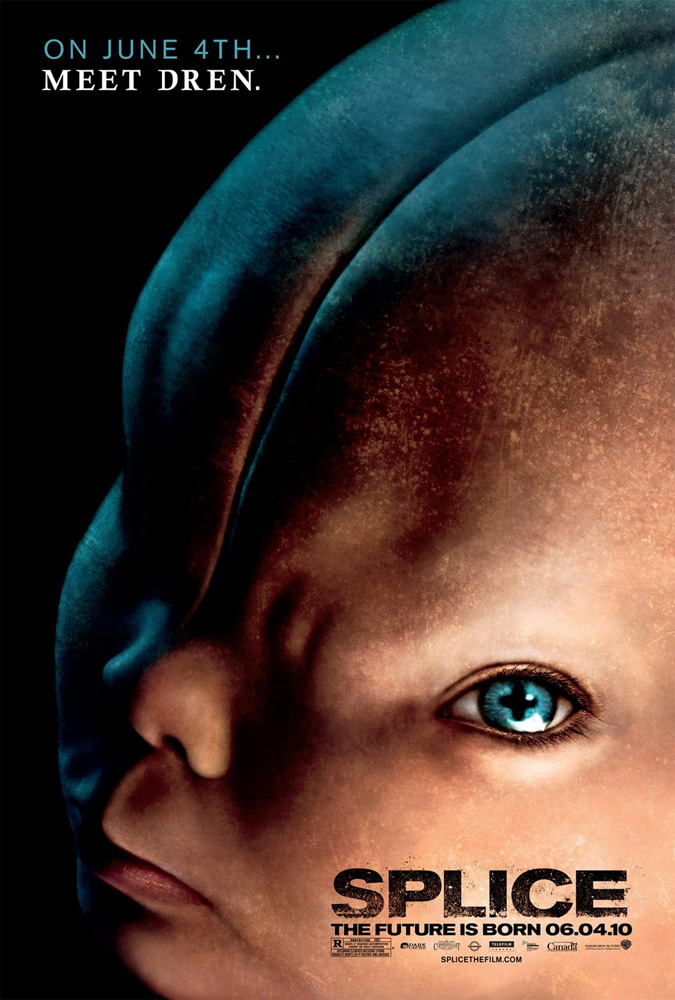