Why is “Spider-Man: Into the Spider-Verse” rated PG? The MPAA rating has been assigned for “frenetic sequences of animated action violence, thematic elements, and mild language.” The Kids-In-Mind.com evaluation includes several characters wearing skin-tight super hero suits that accentuate various body curves, a couple of kisses and scenes of superhero action including the death of a few characters with little gore, and a few obscenities. Read our parents’ guide below for details on sexual content, violence & strong language.”

Editor’s Note: Many scenes feature large flashing lights, bright vibrating colors and shaking accompanied by screeching and whining of metal and several scenes feature a multidimensional portal that opens with clusters of neon colored blocks and bubbles that swirl; such sequences may affect viewers that are susceptible to photosensitive epilepsy or other photo sensitivities.

Animated feature with a teenager (voiced by Shameik Moore), who discovers a realm of alternate realities, where/when male and female characters have each become Spider-Man. The alternates recruit the young man, the son of a Brooklyn police officer (voiced by Brian Tyree Henry), to join them in order to save all realities from being ensnared in a web of destruction. Also with the voices of Hailee Seinfeld, Jake Johnson, Mahershala Ali, Liev Schreiber, Lily Tomlin, Luna Lauren Velez and Nicolas Cage. Directed by Peter Ramsey, Rodney Rothman & Bob Persichetti. [Running Time: 1:57]

Spider-Man: Into the Spider-Verse SEX/NUDITY 2

– A man and a woman kiss briefly in two scenes.
► A young man says three times that he is in puberty because his pants seem too short. A man says he loved his wife, but they were divorced. A man says that seahorses mate for life. A pig character says, “I sing, I dance, I do it in my pants” (it is unclear what the reference implies and we see nothing). We see a flash of a pair of short pants with a bulge in it, but it is unclear what is happening.
► Five superheroes of human, pig, and robot species wear skin-tight suits that accentuate various body curves. One scene includes half a dozen women wearing strapless long dresses that reveal bare shoulders but no cleavage. A teen boy and a man appear shirtless in separate scenes for a few seconds.

Spider-Man: Into the Spider-Verse VIOLENCE/GORE 4

Spider-Man: Into the Spider-Verse LANGUAGE 2

- 1 anatomical term, 2 mild obscenities, name-calling (crazy, stupid, old, fat, elitist, silly cartoon, junky old hobo. hard boiled turtle slapper), exclamations (oh jeez, for crying out loud, shut up yeah man, a pig snorts and a cartoon bubble appears with the word "snort!"), 1 religious exclamation (Oh My God, but because it is a little muffled and it could be Oh My Gosh). | profanity glossary |

Spider-Man: Into the Spider-Verse SUBSTANCE USE

- A character sits at a counter that could be a bar while a voiceover says he is drinking an egg cream.

Spider-Man: Into the Spider-Verse DISCUSSION TOPICS

Spider-Man: Into the Spider-Verse MESSAGE 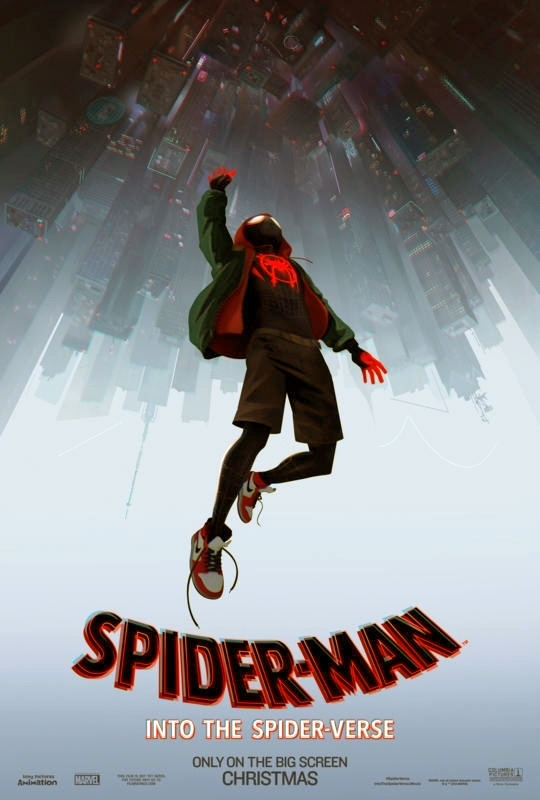