Robin Williams stars as a man who's been working too hard and hasn't been spending much time with his family. Ostensibly as an attempt to bring everybody together, he cancels their planned Hawaii vacation and instead rents an RV and takes them to Colorado -- where it just so happens he has to conduct a sales meeting or lose his job. Also with Cheryl Hines, Joanna 'JoJo' Levesque, Josh Hutcherson and Jeff Daniels. Directed by Barry Sonnenfeld. [1:39]

VIOLENCE/GORE 3 - A teenage boy grabs another teenage boy and pulls up his underwear (we hear ripping). A man slaps a man hard on the arm, and in a couple of other scenes he wraps his arm around his neck and squeezes. A teenage boy flips a man over his back and onto the ground. A teenage girl picks up her brother and tosses him into a chair. A teenage girl tackles a teenage boy (her brother) to the floor and holds him there by lying on top of him.
► Four people slide down a hill in a stream of running water (no one is injured). A man and a woman trip over lawn furniture. A man sprays a man with a high-powered water hose (the man seems to enjoy it).
► A woman opens an oven door and a raccoon screams from inside the oven, and then a man tries to get the raccoon out and finds more than one -- we hear a great deal of commotion.
► There are several scenes of a man driving a large RV badly: he makes a sharp turns and dishes are thrown out of the cabinets and onto the passengers, he runs into brick pillars and pulverizes them, runs into a stop sign, tears off the awning from the side of the RV, and he tears off a gasoline hose from a filling station.
► A man drives an RV up a hill, and gets stuck on the peak; then the RV rolls down, with the man hanging onto the windshield, runs into a mound of dirt, the man is thrown and the RV rolls over him (the man is uninjured).
► A man in an RV tries to pass a slow-moving tractor and nearly runs into an oncoming truck. Three children line up in RV windows with paint guns aimed at another RV that veers off. An RV rolls over two cars squishing them flat. An RV rolls off a road and into a lake, and a man tries to pull it back out by hand. A man rides a bike down a steep hill, takes a big jump, rides along a road behind a moving RV, and climbs on the back of the RV, along the roof and over the windshield causing the driver to slam on the brakes.
► A man serves a teenage girl (who is vegetarian) a plate of deer organs; she runs to the bathroom to be sick, and finds deer meat hanging in a room.
► In an effort to drain a waste tank in an RV a man is sprayed with waste and then splattered with a torrent of waste. A man sprays a "stink bomb" into an RV, trying to chase away raccoons. Green goo drips out of a waste drain on the side of an RV. A man makes several remarks about having to use the bathroom urgently. A man pretends to be going to the bathroom behind a tree, and pretends to be having intestinal problems. A teenage girl yells at a man and throws a green liquid on him (accusing him of contributing to the destruction of children by selling them soda).
► A man says, "We're planning to kill him" about a new employee. Several men complain about their wives and marriage.

SUBSTANCE USE - A man and a woman drink martinis.

MESSAGE - Family should come before work. 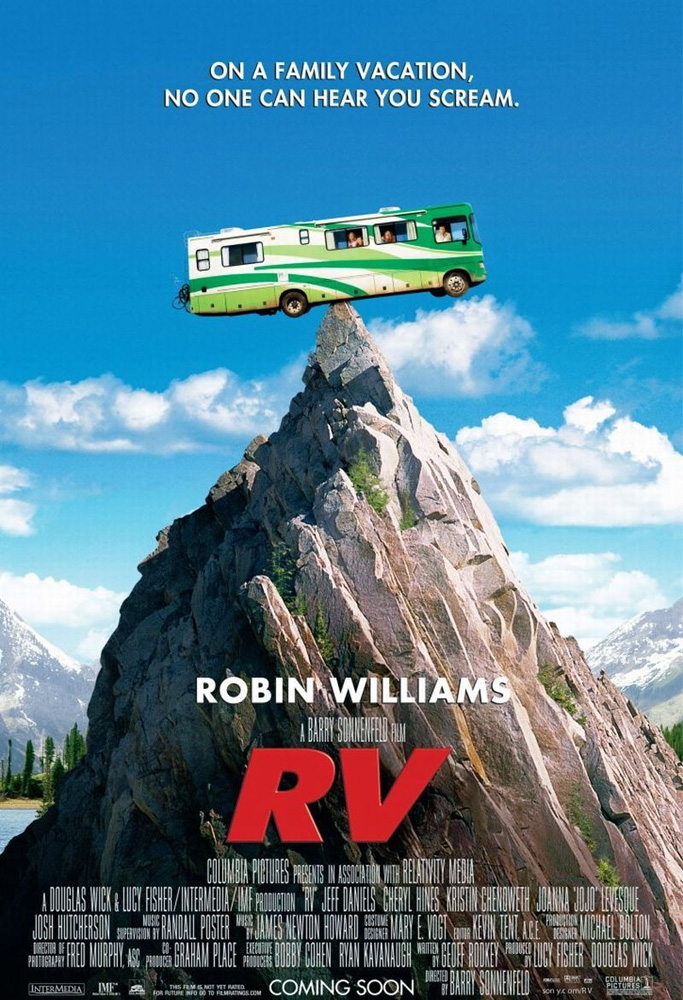