Jackie Chan and Chris Tucker reprise their roles as Chief Inspector Lee and LAPD Detective James Carter, in their third outing, which takes place in Paris: When a Chinese ambassador about to reveal the identity of the leader of a notorious crime syndicate is shot and lies in a coma the two detectives travel to France to find out who's responsible. Also with Max von Sydow, Noemie Lenoir and Hiroyuki Sanada. Directed by Brett Ratner. [1:30]

SEX/NUDITY 4 - A man and a woman wearing a corset and stockings kiss, they lie back in hotel bed, she nibbles on his ear and tells him, "I'm a bad girl," she changes into a bra and panties, he orders a bottle of honey and a Red Bull from room service, they continue to kiss, we see her on top of him, and he caresses her back and they kiss again; at this point he is bare-chested and the scene is interrupted.
► A woman wears a very low-cut dress that reveals cleavage. Cabaret dancers wear tops that are made only of beads and reveal part of their bare breasts. Several scantily clad women dressed in cabaret costumes are shown in a dressing room, a man enters and identifies himself as a costume designer and he has them disrobe to evaluate them for new costumes; we see the women lined up wearing only thong underwear (bare buttocks, backs, legs and shoulders are visible) and he looks them over. Women wearing men tailored suits dance on a stage, they pull their pants off and we see them in panties, garter belts and stockings that reveal their bare thighs. A police officer handcuffs two women and has them bend over the hood of their car; they both wear low-cut and short dresses that reveal bare legs and cleavage.
► A man standing outside a room where a man and a woman are fighting thinks that they are having sex, judging from the moaning and groaning he hears.
► A man speaks to a woman using sexually suggestive terms, assuming she doesn't understand English, but she does. A woman tries to seduce a man and invites him to her room (please see the Violence/Gore category for more details). A man tells another man that he has arranged a date for them with two women and that one of the women wants to play "hide the little Asian policeman." A man says that he'd like to watch a dirty movie. An outtake reel shows a man talking about "dirty movies" he'd like to watch, and he refers to a variety of animals. A man talks about French women being "naked 34% of the time."
► It is implied that a man conducts a body cavity search on two other men (we later see the two men walking as if they are in pain).
► A man sings a song, makes gestures with his hips and grabs his crotch while conducting traffic. A man kisses another man on both facial cheeks.

SUBSTANCE USE - People are shown drinking alcohol and smoking cigarettes in a nightclub scene. A man smokes a cigarette.

MESSAGE - Family is not determine by blood but by shared experiences. 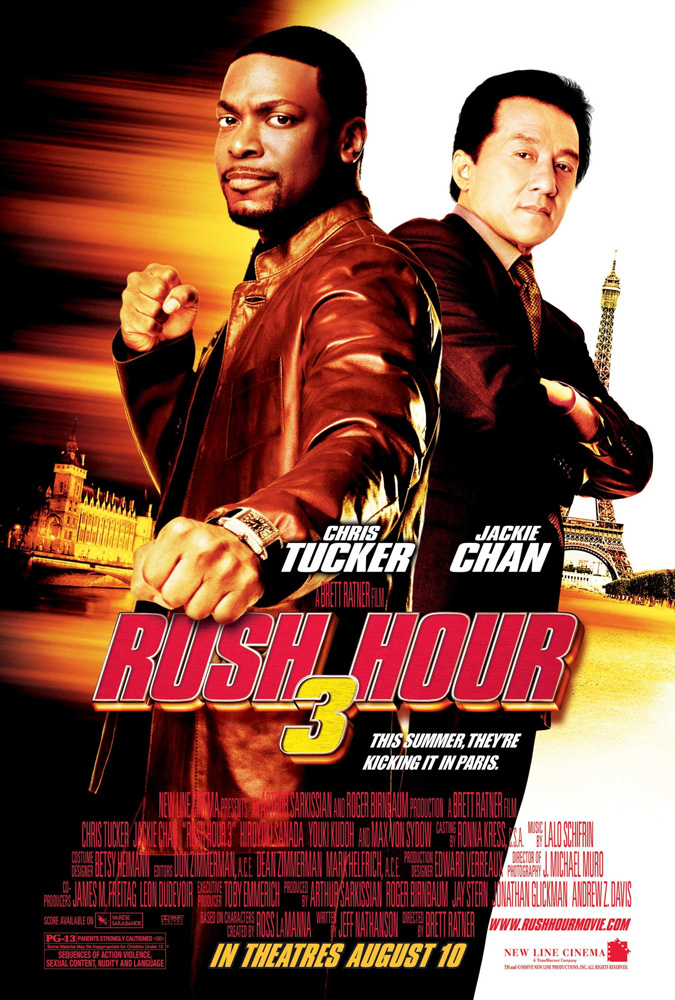